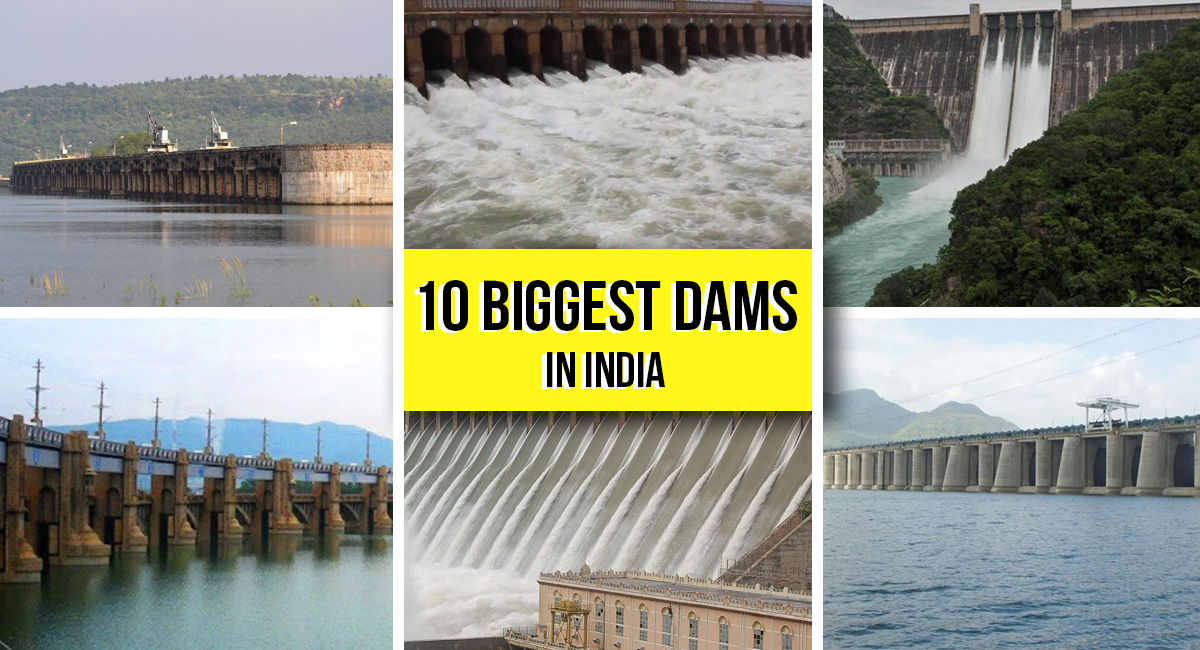 Dams are architectural and civil engineering marvels of the country. They generate a massive amount of hydroelectricity; serve drinking water and irrigation facilities to the state and places around. In India, there are many dams, and some of them also rank in the biggest dams in the world. However, not many know the names of the biggest dams in India. In this blog, we have comprised 10 largest and biggest dams in India that are also preferred as tourist attractions.

Ranked 8th in the list of tallest dams of the word, Tehri Dams is the largest dam in India. It is located around the Bhagirathi River. It is a multipurpose rock and earth-fill embankment dam. The dam’s first phase was completed in 2006, and the other 2 phases are under process. The dam is used for irrigation, municipal water supply, and generation of 1,000 megawatts of hydroelectricity.

This concrete gravity dam is located on the Sutlej River in Bilaspur, Himachal Pradesh. The dam forms the Gobind Sagar reservoir, the third largest reservoir in India. The first Prime minister of the country, Jawaharlal Nehru, described it as the ”New Temple of Resurgent India”. The infrastructure of the dam attracts tourists from across the country.

Also known as Narmada Dam is the most massive project that will be constructed on the Narmada River. The dam provides water to the arid regions of Saurashtra and Kutch, which frequently struggle with severe drought problems. The foundation of the dam was first laid in the year 1961. Besides Gujarat, Maharashtra, Madhya Pradesh, and Rajasthan also benefited from the dam. The dam also has a reservoir holding 7,701,775 -acre-ft of water.

The dam is built over the Mahanadi River. It is one of the first major multipurpose river valley projects that started post-Independence. It is one of the largest dams in India and the world. The dam features two towers that are Minar and Nehru Minar. Some major attractions around the dam are Ushakothi Wildlife Sanctuary, Cattle Island, Vimleshwar Temple, and Huma Temple.

Nagarjuna Sagar Dam is a masonry dam across the Krishna River between Guntur District, Andhra Pradesh, and Nalgonda district, Telangana. It was constructed in the year 1955. It is one of the biggest dams in India and is also a multipurpose hydro-electric and irrigation project in India. The dam aids irrigation water to West Godavari, Nalgonda, Krishna, Suryapet, Guntur, and Prakasam districts. It features one of the biggest reservoirs in the country

The Koyna Dam is one of the largest and biggest dams in India. It is built in Maharashtra, which is home to numerous other dams. The Koyna Dam is a rubble-concrete dam which is constructed on the Koyna River in Mahabaleshwar. It caters hydroelectricity and irrigation needs of the neighboring states

Indira Sagar Dam is one of the largest dams in India. It is a multipurpose project of Madhya Pradesh. The construction of the dam was started in the year in 1992. It serves irrigation in 1,230 square kilometers of land. Indira Sagar Dam features the largest reservoir in India

One of the largest and biggest dams in India and Tamil Nadu, Mettur dam, is located over the river Cauvery. The base of the dam features a park – Ellis Park, which is also a site attraction. It provides drinking water and irrigation facilities to over 12 districts of Tamil Nadu, and thus, it is known to be the life and livelihood-giving asset of the state.

Popularly known as KRS, Krishna Raja Sagara is one of the largest dams in India. Some of the tourist attractions around the dam are the Ornamental garden, Brindavan Garden.

India boasts numerous biggest dams that provide hydroelectricity, drinking water, and irrigation facilities to the state in which there are built. Also, these dams are no less than gems of the country as they serve to million livelihoods.