20 Natural Wonders of India that You Must Explore 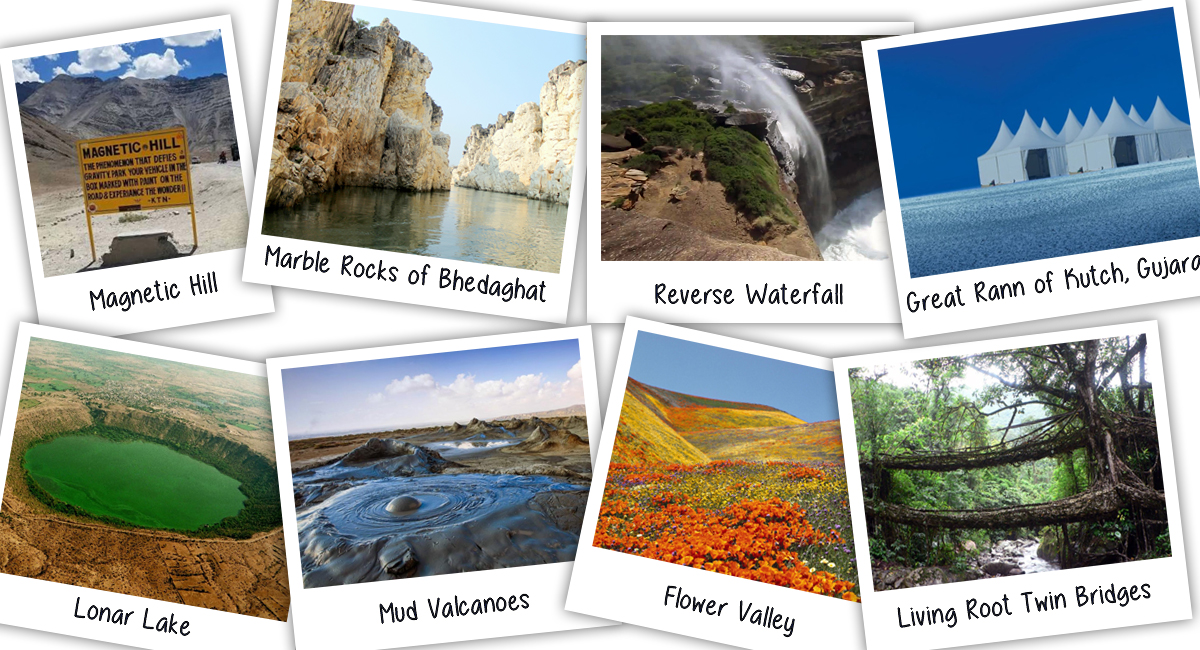 India is one of the popular tourist destinations and all thanks to its unique places that have garnered immense love. Known for its bio in diversity, India boasts numerous natural wonders that have become popular over the years. Here is our list of natural wonders of India that you must explore once in a lifetime.

Also known to be “Cyclops Hill,” Magnetic hill is one of the most mesmerizing natural wonders of India. What makes it different is the fact that it pulls the vehicle in the upward direction, which creates an optical illusion. This is so because; this downhill road is uphill in real. This is the reason why it is called Gravity Hill as well.

It’s the world’s oldest Meteoric Crater Lake and third largest in terms of the size. This is one of the best natural marvels of the country. It nestles around temples and scenic beauty. This lake is alkaline and saline in nature, which has attracted many scientists’ attention towards it.

Bora caves are a perfect example of natural wonders. The caves were carved millions of years back by the Karstic action of the Gosthani river, and it also has amazing speleothems. The cave also has archaeological importance, which signifies human existence in this area before 30,000 to 50,000 years.

Nighoj is a village that is located in the Ahmednagar District, Maharashtra. The place is famous for its naturally created potholes on the Kukadi River. Experts from around the country visit the place to know about their formation. While visiting this pothole, you can extend your visit to Morachi Chincholi- a perfect example of an eco-friendly place.

Loktak Lake is the largest natural freshwater lake in the North-eastern state. It boasts a distinctive ecosystem known to be Phumdi, which means floating mats of soil vegetation. These Phumdi resembles the mini island and is found in many forms. What makes them different is a Lamjao national park that is located around the lake. It is believed to be the only floating national park in the world and is home to the antlered deer and other aquatic plants, birds, and animals.

Hogenakkal Falls means smoking rocks in Kannada. It is named so because waterfalls create spray so strong that it appears to be a smoke instead of the mist. The massive black granite rocks bound it on all sides. Hogenakkal Falls are not the huge waterfall, but these are series of smaller falls that merge.

Standing high on the banks of the river Narmada, the marble rocks are considered to be emblematic of the region’s ancient geology. These look like limestone rocks and tint of white-grey color which could be due to the higher amount of the magnesium which also gives it soapstone texture. Some of the best activities that one can perform around the place is boating between cliffs.

Next in our list natural wonders of India is Sangetsar Lake. This spellbinding beauty is perched on the high- altitude. This natural beauty is known to be Sho-Nga-seir by its locals, which was inspired by the Shok-Tsen village. It was later converted into the lake because of the 1971 earthquake. Another fact that makes these lakes of the top natural wonders of India is that after the earthquake the dead trees emerged from the water which gives it a haunted look. In case you are planning to visit the lake, you would have to take the permission from District Commissioner’s (DC) office at Tawang.

Located in the Balasore district, Orissa, the Hide and Seek beach is home to unusual phenomena. Every day like all the sea it recedes, and suddenly it disappears for some time. Due to this reason the, beach also has rare specifies such as red crab and horseshoe. What could be calmer than walking on the sea bed and watching the unique phenomena?

Jaintia Hills in Meghalaya is home to thousands of crevices and caves. Amongst all Krem Liat Prah Cave is the longest natural cave in South Asia. It is an ideal place for caving or spelunking. The rugged rocks, breath-taking stalactites, and pools around the caves make this place a natural wonder of the country.

Located on the Western Ghats in Maharashtra, Malshej Gha falls, and motorable roads between Ahmednagar and Kalyan is one of the iconic natural wonders of India. During every Monsoon, the mountainside, along with the stretch, goes through the makeover. During the Monsoon, one can relish the reverse waterfall near the Sinhagad Fort. Besides, this unique wonder, one would have the best of the experience on the top of the waterfall.

This geological phenomenon of mud volcanoes is formed by the eruption of slurries or mud, gas, or water. This unique volcano was first observed in the year 1983 and is known as Jalkis by the locals.

Owing to its characteristics, the Umngot river is one of the gems of the country. It flows through the Meghalaya’s East Jaintia Hills. The river then extends to the plains of Bangladesh, where one can see the river so clear and transparent. When one could even ponder the aquatic life?

Famously called Thonsepar and Coconut Island, St Mary’s Island is located around the coasts of Malpe in Karnataka. This pristine little island is known for its unique hexagonal columns of basaltic lava. In the year 1979, the place was declared a national geological monument. One half of this island is dotted with rock pillars, and another half is home to the shellfish which adds to its charm.

Located in the Chamoli district, Uttrakhand, the flower of Valley is no less than the abode of heaven for tourists. The place is famous for its wide range of flowers that you will find not find in other areas of the country.

Known to be most pristine falls of the western Ghat, Dudhsagar falls are one of the mesmerizing natural wonders of India that one must explore. As the name says, every drop of the waters appears to be milk. What makes this natural wonder even more fascinating is that it is surrounded by captivating scenery and breathtaking beauty.

The rock- hard arch is about 8 m in width, and it has a height of 3 m. It has withstood most of the calamity. This natural arch is backed by the stunning garden that makes it one of the most visited places in the country. The site looks even more impressive during the full moon night.

This living root twin bridge is nature’s alternative to the wooden bridge, which was destroyed years back. As the same say, the bridge has been built by the naturally growing roots of rubber trees. Unlike artificial bridges, they do not demand the maintenance, with the thickening of the root, the base of the bridge becomes more solid.

The salt marsh is perched on the Thar Desert in the Kutch district of Gujarat. It is known to be the largest salt desert in the world. You can visit the place at the end of February and be part of Rann Utsav, which is celebrated at the grand level.

Needle hole point or Elephant Head Point looks like a true elephant trunk. It is formed through natural rock. The place creates a fantastic view with the waterfall and echo point in the backdrop.

While there are only seven wonders of the world, India undoubtedly has several natural wonders which are known across the globe for their distinct characteristics. This was our list of natural wonders of India. Do tell us if you want to add anything else.