Top 12 Stand-Up Comedians In India – Laugh Your Heart Out 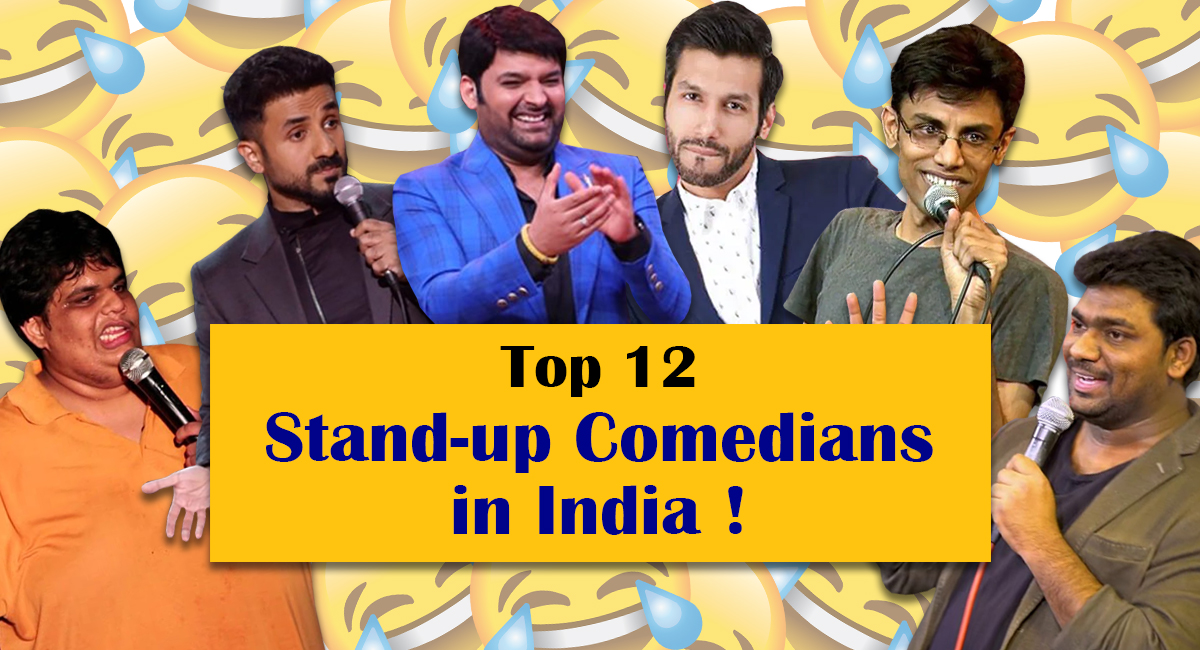 A decade back, stand-up comedy was synonymous with comedians who were then believed to have no work apart from blurting out funny words. With the change in the time, the concept of Stand-up comedy has changed. It has become one of the highly paid professions in India. Stand-up comedians have raised the bar, and people now prefer to watch a comic gig rather than irrelevant content.

Here we have listed 12 stand-comedians who changed the comedy scene in the country and have become popular.

He started his carrier through acting in movies like Badmash Company, Delly Belly, Go Goa Gone, and many others to name. In 2017, the actor entered the international stage with Netflix’s special Abroad understanding. The actor turned stand-up comedian has performed in more than 35 plays and 100 comedy shows, and over 8 TV shows and comedy specials. Some of his best work includes the six comedy specials that were written, directed, and acted by him only. His comedy specials that tickled the entire nation is Brown Men Can’t Hump, Not for members only, Bored of the things, Who Let The Das Out? Son of a Switch! VIRgara.

Biswa Kalyan Rath is a multitalented talented stand-up comedian, Youtuber, and writer. He was first noticed through his YouTube comedy series, Pretentious Movie Reviews, that he hosted along with a co-comedian Kanan Gill. He has also co-written a show called Laakhon Mein Ek and has also done a minor role in the same show. Biswa has also been a judge on a comedic reality TV show- Comicstaan. Because of the impeccable work he has done in the industry, he tops the list of best stand-up comedians in India.

Time India has rated her amongst India’s top 10 stand-up comedians. She is counted amongst the first women that went on to become a stand-up comedian. The ambitious comedian has also written articles and columns in columns in leading magazines and newspapers like Grazia Men magazine, DNA, Firstpost.com, and Financial Times (UK, Weekend Edition).

Abish began his carrier as an RJ at Red FM in Delhi and then switched to stand-up comedy. He came into prominence with his work in All India Bakchod, and he then went on to host the comedy show- Comicstaan. The stand-up comedian then started Youtube Talkshow – Son of Abish, which is created and hosted by him. The English talk show has apparently completed 6 seasons.

Danial Fernandes is a Mumbai-based stand-up comedian who became famous for his dark and surreal comedy that is inspired by the social issues of the country. In the past, he has collaborated with several other Indian stand-up comedians. A special mention to his acts like The Comedy Store, High Spirits, Blue Frog that is available on amazon prime.

The man with multiple hats is one of the founders of All India Bakchod – a creative agency that has taken Indian comedy to a new level. Tanmay Bhat is one of the ace stand-up comedians in India who is also a scriptwriter, producer, and performer. He is touted amongst the first four comedians that were part of the Comedy store- a comedy club in London. Soon after this, he performed with comics from Nepal in the Best in Stand Up Event. He, too, has judged the reality show-Comicstaan.

Kunal is famous for its unique observational comedy, where he picks instances from regular life. In 2017, Kamra released a YouTube podcast called Shut up Up Ya Kinal with Ramit Verma. In the show, both Kunal and Ramit are engaged in an informal discussion with activists and politicians. Besides his show, the artist also performs live.

Undoubtedly, Kapil Sharma is one of the most popular stand-up comedians in India. The noted comedian was the winner of The Great Indian Laughter Challenge season 3. He then acted in the series of the comedy show amongst which Comedy Circus that was aired on Sony channels gained him many hearts. He then came up with his own comedy show called Comedy Nights with Kapil Sharma, which aired on Colors channel. Followed by his another show on Sony TV. The comedian has acted in 3 Bollywood movies and has presented many notable shows. Seeing his achievements, he has been awarded the prestigious Dadasaheb Phalke Academy Awards.

Also known as sakht launda, Jakhir Khan is a famous presenter, writer, and stand-up comedian in India. He rose to fame in 2012 after winning the stand-up comedian competition Comedy Central. He has also been part of the many comedy shows like on Air with AIB. You can watch his popular acts like ‘Haq Se Single’ and ‘Kaksha Gyarvi’ on Amazon Prime.

Times of India has rated Sorabh Pant amongst the top 10 finest stand-up comedians in India. He has performed more than 250 comedy shows across the country. That’s not it, Pant is also famous for his tweets and has been listed as No. 1 by IBN in the year 2012. Some of the renowned comedy gigs include Pant on Fire, Travelling Pants, and his comedy company- East India Company.

Also, known to be Stand-up Rockstar, Kenny started his journey with YouTube, where he used to make special effects films, which gained him popularity. He went to become a full-fledged stand-up comedian after winning the Stand-up comedy festival at IIT Fest in Mumbai, and then there was no look back for him.

In the last few years, stand-up comedy has become a leading professional. All thanks to the inspiration stand-up comedian in the country. Comedians like Tanmay Bhatt and Kapil Sharma have even performed at the international level as well.