30 Top Bollywood Movies Based on True Stories to Inspire You 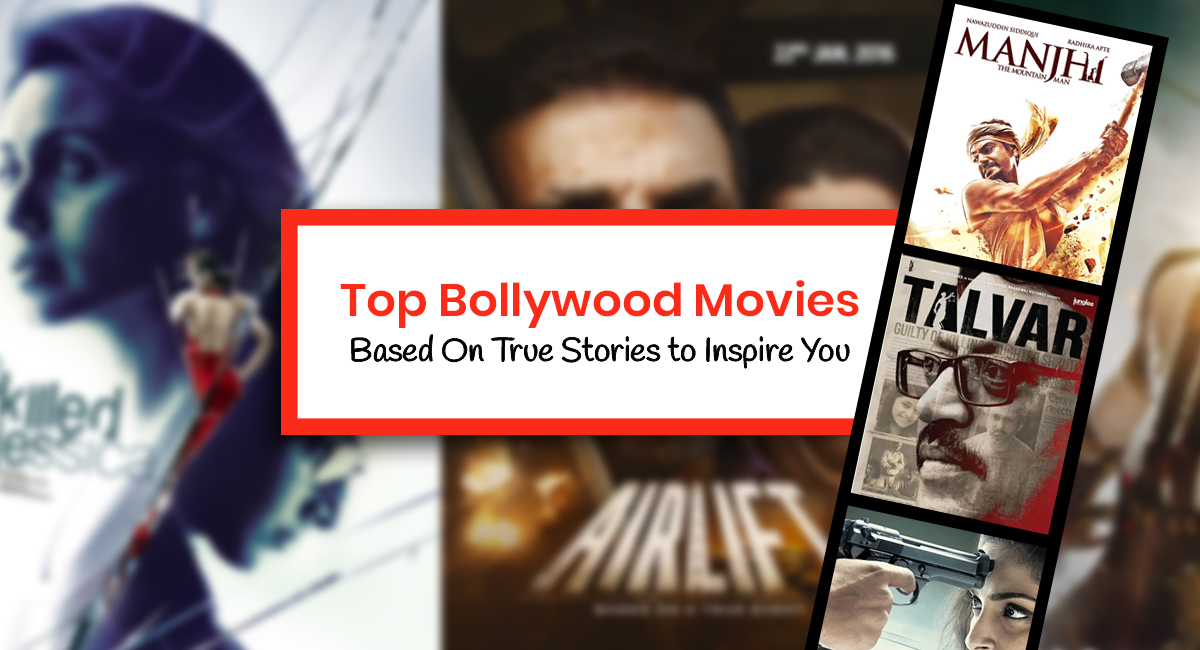 Bollywood movies play a powerful medium in creating awareness about the real events that are otherwise overlooked. While many of them prove to be a commercial hit however, there are many movies that strike a chord with the audience and went on to become finest films of Hindi Cinema. Whether it is Aamir Khan Starrer Dangal or Akshay Kumar’s Padman, one of the common things about them is that they both are based on real stories and have been motivational in their own ways. Here we have shortlisted 30 best Bollywood movies based on true stories that will definitely inspire you.

Top Hindi Movies Based on Real Story in Bollywood

The crime thriller is inspired by Hussain Zaidi’s book Black Friday – The True Story of the Bombay Bomb Blasts. The film is based on the true-life events that led to bomb blasts, followed by the police investigation.

The movie was premiered at Locarno International Film Festival in 2004 and was supposed to release in Indian in the same year; however, the Bombay High Court kept the movie on hold, it was then released in 2007.

Aamir Khan starrer Dangal is loosely based on the Phogat family. The titular role of Mahavir Singh Phogat is played by the Khan itself. The movie is an inspiration, especially for the girls, as it rightly says- girls are no less than anyone!

The film broke many records at the box office and became one of the top-rated Bollywood movies based on true stories.

URI: The Surgical Strike is a tribute to the Indian Army. Owing to its screenplay and power-packed acting of the stars like Vicky Kaushal, Yami Gautam, Mohit Raina & Paresh Rawal, the movie was one of the best movies of 2019 and was also amongst the highest-grossing Indian films.

Bhaag Milkha Bhaag portrayed the life story of the Milkha Singh, an Indian athlete who won first gold medal for India in the commonwealth game and was a national champion runner. He is also known as Flying machine.

Farhan Akhtar played the lead role of Milkha Singh. The movie was critically acclaimed for its motivational storyline and became one of the best Bollywood movies based on true stories.

It is the story of Paan Singh Tomar, an Indian athlete who became the most feared dacoits of Chambal after his retirement. The ace actor Irrfan Khan played the role of the protagonist.

As it features true incidents, Paan Singh Tomar is one of the best Bollywood movies based on real stories.

Talvar is based on the true murder story of- 2008 Noida double murder case. The movie showcases the investigation of the case from different perspectives.

The film was a success on the box office. Vishal Bhardwaj won the Best Adapted Screenplay Award at the 63rd National Film Awards for the movie. This is amongst the best Hindi movies based on true stories.

Next in our list of Bollywood movies on true story is Shah Rukh Khan’s movie Swades. The story of this Hindi movie is loosely inspired by NRI couple Aravinda Pillalamarri and Ravi Kuchimanchi, who came back to India and developed a pedal power generator for girls’ school.

Though the movie was not a massive success at the box office, over the years, it has become cult classic.

The biographical drama movie is based on the real-life of human rights activists and lawyers- Shahid Azmi who was killed in 2010. Azmi never compromised his morals, which later became an inspiration for many.

Shahid is one of the gems of the Bollywood. It is currently available on YouTube; watch it if you have missed the movie at the time of its release.

While the movie throws light on various social issues that include feminism and nationalism, the film is a biography of former coach of Indian men’s national field hockey team. His team lost the match against Pakistan, and his loyalties towards the country were in question, owing to which he left the job.

Years later, he made a comeback as Indian women’s national field hockey coach. He established his team that went to become the number 1 hockey team. The movie won many awards. Chak De is indeed amongst the top movies based on true stories.

The movie is inspired by multiple real events such as the 2014 Badaun gang-rape allegations and the 2016 Una flogging incident.

It is mainly based on Article 15 of the Indian constitution that prohibits discrimination based on race, sex, religion, and place of birth. The movie supports the truth! Article 15 is a must-watch!

Gully Boy is a real-life story of the Indian rapper- Naezy (played by Ranveer Singh). The movie explores Naezy’s struggle to get fame in the industry. It is one of the top-rated Bollywood movies that inspired many to make their dream come true.

The Legend of Bhagat Singh is the biopic of the Indian revolutionist Bhagat Singh. Ajay Devgan played the titular role. The movie is undoubtedly inspirational as it evokes the feeling of patriotism amongst the countrymen.

If you have not watched the movie, do watch it on the OTT platforms like Netflix.

Airlift is an inspirational story of the unsung hero- Ranjit Katyal, who made India proud. The historical drama follows a Kuwait-based businessman- Ranjit Katyal’s (played by Akshay Kumar)  hardship to save more than 170,000 citizens during Kuwait’s invasion from Saddam Hussein.

The movie was well-received by the Indian audience and is truly inspiration for many!

Manjhi- The Mountain Man is one of the inspirational Bollywood movies based on true stories. The movie revolves around Dashrath Manjhi (labourer in Bihar village), who carved a path through a hill by using only a chisel and hammer after his wife’s death. She could not access the hospital due to the high mountain and thus.

The film also narrates his fight with the government to make his village- Gehlaur developed. Nawazuddin Siddiqui played the role of Manjhi. The actor was applauded for his stellar acting.

Sardar is a biographical drama film on India’s greatest freedom fighter-Sardar Vallabhbhai Patel. The film embraces his life journey from a brat to one of the Indian freedom fighters. It also highlights all the major work done by the iron man of the country.

Pad Man is also one of the real story movies in Bollywood. It explores the struggles and difficulties faced by a social entrepreneur in order to make economical sanitary pads for women.

The movie is defiantly inspirational as it shows how a common man tries his best to break the stereotype attached to the menstruation and sanitary pads.

Written and produced by J. P. Dutta, Border is based on the soldiers’ real-life stories that participated in the Battle of Longewala in 1971.

The movie has many famous songs like Sandese aate hai to its kitty. The movie is currently available on Netflix. Do watch it if you haven’t watched the movie yet.

Next in our list of Bollywood movies based on true stories is Alia Bhatt starrer Raazi. The film is inspired by Harinder Sikka’s novel Calling Sehmat.

The novel is based on the true story of an Indian military official who, at his father’s request, marries an army official in Pakistan to access important information before the 1971 war. Raazi is one of the best movies of Bollywood!

Available on: Disney+Hotstar and Amazon Prime

Undoubtedly, it is one of the best Bollywood movies based on true stories! It revolves around the life of former captain Mahendra Singh Dhoni.

The movie divulges his struggle to become an ace cricketer and lead the Indian cricket team. Late actor Sushant Singh Rajput played the role of Dhoni. The film was also dubbed in various languages such as Telugu and Tamil.

The movie’s plot is based on the real-life event that took place during the hijack of Pan Am Flight 73 in Karachi. Neerja was an air hostess who succumbed to death while saving the life of the passengers.

The movie shows the courage of Indian women and how she became the savior of thousands of passengers. The film received many accolades and awards.

Guru is amongst the top-rated Hindi movies based on true stories. The movie portrays the real-life story of Dhirajlal Hirachand Ambani (Dhirubhai Ambani), the Indian business tycoon who founded Reliance.

It showcases his struggle and hardships to set up his own business in his native country. The movie received many accolades for the story and direction. Dhirubhai Ambani is truly an inspiration for all the budding businessmen!

The Ghazi Attack is based on a real event from the Indo Pakistan war that took place in 1971. The story revolves around the naval officer of an Indian Submarine and his team, which remained underwater during the war.

The movie was simultaneously released in Hindi and Telugu and went on to become the Best Telugu feature film.

Akshay Kumar starrer Kesari is one of the patriotic movies of Bollywood. The movie is inspired by the Battle of Saragarhi that took place in the year 1897.

In the battle ground, army of 21 Sikhs fought against more than 10,000 Afghans. The movie was praised for its cinematography and brilliant acting.

Sarbjit is a biographical drama film that portrays the real-life of Sarabjit Singh, who was given the sentence of death by Pakistan’s Supreme Court. Singh and his family struggled for more than 22 years to seek justice.

Randeep Hooda essayed the pivotal role. The movie received mixed reviews from the critics; however, it is an inspiration for all the Indians struggling for justice.

No one Killed Jessica unfolds true-life incidents of Jessica’s murder case. Jessica was a model with roots in Delhi. She was murdered by Manu Sharma, the son of Vinod Sharma (a member of congress).

The movie explores the struggle of a sister who seeks justice for her sister. Rani and Vidya Balan played the lead role in the film.

Bajirao Mastani is a historical drama inspired by the real-life of Peshwa Bajirao from the 17th century.

Though the movie was objected for its storyline, however, on its release, it received positive reviews and went on to become one of the best romantic Bollywood movies of all time.

The Hindi action thriller is inspired by the real-life case-Batla House encounter case. The movie revolves around the Police Officer- Sanjeev Kumar Yadav (played by John Abraham), who played an important role in the case. The film was commercially hit at the box office and is one of Bollywood’s best real story movies.

Available on:  Amazon Prime and Netflix

Mary Kom states the true-life chronicles of the Indian Boxer, Mary Kom, who became a successful Indian sportswoman. The movie features her hardships and struggles to balance her personal and professional life.

Priyanka Chopra got into the skin of Mary Com and proved that the desi girl is no less than a true star!

The movie is loosely based on the professional and personal life of scientists of the Indian Space Research Organisation who contributed to the first interplanetary expedition- Mars Orbiter Mission, which became a success and made the country proud.

Manikarnika is a biopic of Rani Lakshmi Bai- a women freedom fighter who gave her life on the battlefield while fighting with Britishers.

The lead role was played by the ace actress Kangana Ranaut. This inspirational movie received mixed reviews; however, it remains one of Bollywood’s best women-oriented films.

Bollywood has made an array of movies that are based on real stories and events. Some of them have been commercially hit, and some could not do great business at the Box office but left a substantial impact on its audience. The blog has best of the Bollywood movies that are inspired by true stories.

Importance of Podcast in Digital Media
How to convert Jio Prepaid to Postpaid?