Interesting Chetan Bhagat Novels you would not want to miss!

All Posts / Entertainment / Interesting Chetan Bhagat Novels you would not want to miss! 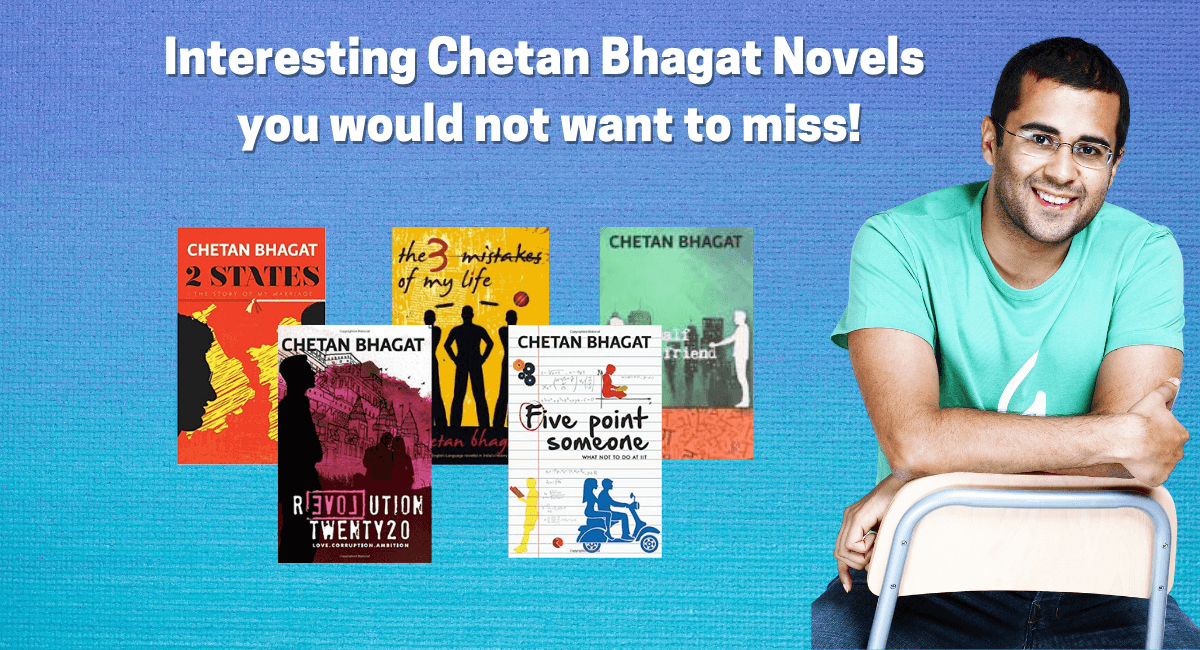 One day I switched on to the news channel, and the anchor was discussing the new launch novel on the prime time slot. Yes, that’s the impact Chetan Bhagat has brought in the Indian reader landscape. We would not have imagined that nation would talk about some books or novel in this era when there is numerous medium of entertainment. He is the author who has influenced Indian youth to pick up a book and read till the end. With his successful eleven novels and books, Chetan Bhagat’s latest ‘One Arranged Marriage Murder’ released in September is ready to thrill you.

There are many English novels and authors in India, but the way Chetan Bhagat captures his audience’s attention is unmatchable. The young adults look forward to reading his novels to engage with amazing journey with life-like characters and thrilling story plots. The dialogues and story presentation of his novels when reached to well-known directors and producers of the country, they decided to turn the novel into a screenplay. The first novel of Bhagat, which was made to big screens, was One Night @the call Center with the movie name ‘Hello.’ From then, he never looked back. Following is the list of all the novels written by Chetan Bhagat, which turned into movies with famous star casts.

As mentioned above, this was the very first novel that caught the eyes of the Bollywood director Atul Agnihotri. The story revolves around six call center employees who are stuck in the everyday troubles individually. However, one day the things turned around one night after they received a call from God.  The novel is thrilling and captivating. The entire movie is by the book, as you read, you see in the film. The moral of the novel is to just believe in yourself, and you will know the answers to your problems. The movies were released in 2008, and it cast big movie stars like Salman Khan, Katrina Kaif, Sohail Khan, Arbaaz khan, Amrita Roa, and more.  A good novel is never too late to read, do ahead and grab your copy to read this thrilling novel.

Chetan Bhagat’s first novel was Five Point Someone. The novel is based on three friends who got into IIT- the premium institute for engineering and faced struggles in all aspects of their life. They hit the bottom rock and were struggling to know they are here for what? In the CGPA marking system, they could only score five points out of ten. This novel is the journey of these three friends from being five points somebody to five points someone.

Novel readers realize usually state that the novels were much version of the story than the movie. However, 3 Idiots is an exception here. The novel was amazingly good, but the movie was even better. There were many additions, subtraction, and elevation to the storyline if we compare it with the novel. Directed by Rajkumar Hirani, 3 Idiots has the perfect balance of comedy, witty dialogues, relatable circumstances, and mind-set changing morals. If you have not read this Chetan Bhagat novel, you miss out on the writer’s best work.

The back cover of the novel has an exciting introduction to the story. It states that around the world if a boy and a girl love each other, they get married. This is not the case in India, here if a boy and girl love each other, both families need to love each other. That is not enough, the girl’s family has to love the boy, and the boy’s family has to love the girl. After that, if the boy and girl still love each other, and then they get married. It is funny but actually true. This storyline of marriage between two different states is the true story of Chetan Bhagat’s life. The struggles of coping with family pressure and love life attract fun, situational comedy and light moments in the novel. It is one of the best Chetan Bhagat novels which have broken the stereotypes of an Indian marriage.

The story was elevated by the director Abhishek Varman in the movie 2 states. The star cast of Ali Bhatt and Arjun Kapoor was appropriate for the movie. It was mostly by the novel with little changes to make it more engaging. If you have still now read the book, you need to get the copy today and beat your boredom with a captivating love story that turned into a love marriage.

The novel is set in early 2000, Ahmedabad, where three friends are in different situational struggles. One young man opens up the cricket shop, one is blessed with the rare gift of playing great cricket, and the other wants to support his friends. The story revolves around how these three faced the struggles of riots, earthquakes, social differences, religious and political issues. Along with that, their own mistakes which made them even more unacceptable. The story unwinds itself and shows us how they tacked it and overcome failures.

This beautiful novel was turned into movie by the director Abhishek Kapoor. The main star casts are Sushant Singh Rajput, Amit Sadh, and Rajkumar Rao. It is interesting to see how these characters evolve with the story. If you have not one of the best novels of Chetan Bhagat, you can do it now.

5. Half Girlfriend (Half girlfriend)

An urban-rural love story is not a new story, but when Chetan Bhagat wrote on this line. He made it look from a different perspective. The story starts with a Bihari boy who entered a reputed college and feels in love with a very modern urban girl. The wanted relationship and the girl wanted friendship. They compromised at the tussle, calling her his half girlfriend. The novel is not only about love but the undercurrent stereotype of class and language barrier.

Directed by Mohit Suri, Half girlfriend movie has tried to justify the novel but couldn’t. With the star cast of Arjun Kapoor and Shraddha Kapoor, the film is a treat to watch.  I would suggest that reading this novel is a better option.

Along with many famous and movie-oriented fictional novels, Chetan Bhagat has also produced non-fictional books and essay collections, which is worth reading is a sensitive Indian. Following is the list of amazing books and novels you can decide to learn and gain perspectives.

To add another great novel in the list of Chetan Bhagat novels, he has announced the launch of ‘One Arranged Marriage Murder.’ The book is introduced as one of the best thriller novels which involve love, marriage, friendship, family, and Crime. It sounds so exciting that the novel lovers have pre-ordered the novel. You can do the same and wait for its launch for a thriller Indian novel.

The novel is set in the city of Varanasi. There are two ambitious boys; one wants to be rich and the other wants to bring revolution.  They both end up loving the same girl. The story revolves around the struggles of three people trying to find success and love.  If you want to see how they overcame the struggle go ahead and get your copy.

When you see around and realize our country is entangled in many social problems, the first questions you ask is what could be done? This book is Chetan Bhagat’s first non-fictional book, where he gives his insights and analysis of how we could perceive the troubles of modern India. It is the collection of Bhagat’s essays and columns which every young mind should read. Buy your copy to find some perspectives on the things which troubles you too.

This novel is another non0fictional novel by Chetan Bhagat after the success of ‘What Young India Wants.’ If you love your country, you would have surely thought or talked about the severe problems of the nation. The struggles of unemployment, poverty, communal violence, violence against women, illiteracy have been a hurdle in India’s growth. In this novel, Bhagat has tried to give some practical solutions to real problems. So yes, you can do your part of the solution and not just debates.

It is one of the best Chetan Bhagat Novels you should not miss reading. The novel revolves around the life of a girl who is about to get married. She earns well, says out what she thinks, has had boyfriends in past, so the society is ready to judge her. In comparison, the same things attached to a boy would make him more likable in community.  The novel addresses this hypocrisy of our society.

This novel is a classic merger of love, breakup, suspense, and thrill. There is a boy crazily in love with a girl, and they broke up three years ago. The boy couldn’t move on and continued to stalk her and try to contact her. One day the girl called up and asks him to visit her in hostel room 105. He went there, and he says his life was changed forever. To know what happened later, you need to grab the novel. It is also one of the most read Chetan bhagat novels in Hindi.

India is a developing country, and it has a struggle of its own. Most people discuss the problems of the country with hopelessness that nothing can happen in India. However, in this novel, Chetan Bhagat has given its reader a new lens to see the problems with the hope of change. He makes us think on topics like does it matter which political party is in power? How can we evolve to be an equal society? And many such questions which will compel you to think twice.

Chetan Bhagat novels have helped the youth of the country be readers again. As an author, he has produced captivating novels that have engaged with the readers. All the novels are translated in Hindi to cater larger domain of readers. If you have never been a reader, you can grab Chetan Bhagat’s novel to start reading, and I am sure you will find it hard to keep the book down. Bhagat uses easy to understand English and the stories which we can relate some way or the other. Go on and get your copy of Chetan Bhagat novels and enter the life story of people like you and me facing the struggles we do.  Many of his novels are now in big screens you can enjoy his movies as well. You can consider looking for best comedy movies to engage in laughter and fun.