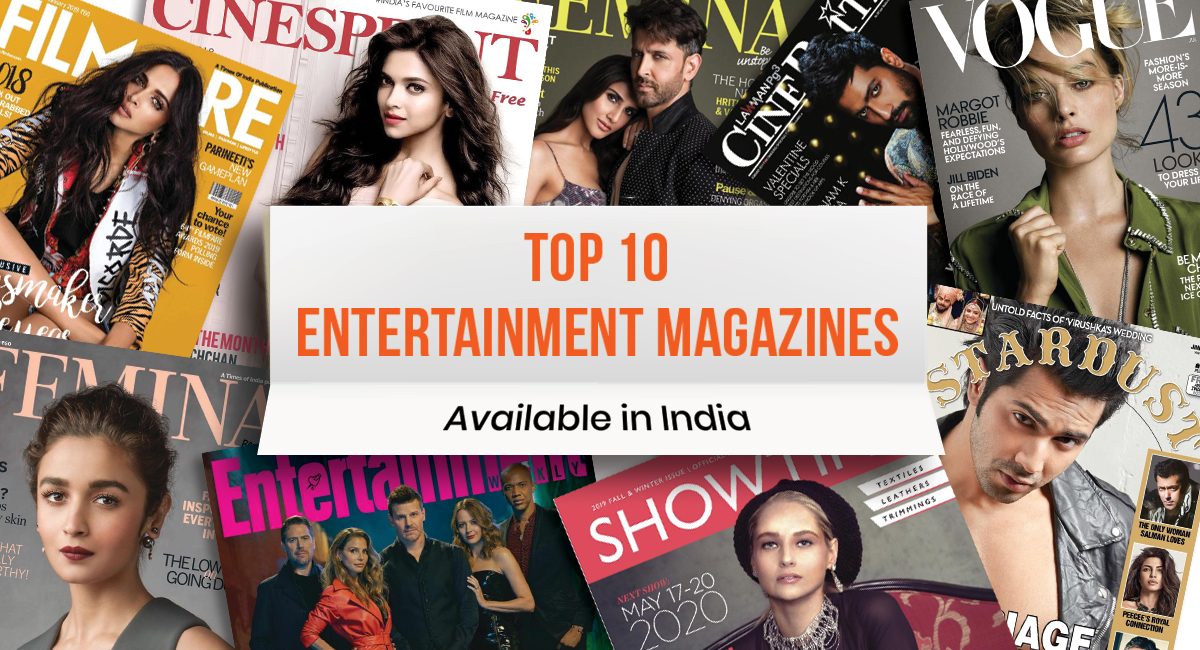 The English magazine is dedicated to Hindi Cinema, popularly known as Bollywood. The magazine was launched in the year 1952 and is published by Worldwide India. It is one of the famous entertainment magazines in India. Filmfare magazine covers movies, music, and celebrities. The Filmfare group also organizes renowned film awards called The Annual Filmfare Awards every year.

Next in the list of top 10 entertainment magazines in India is Stardust. This is the monthly magazine which is published in both English and Hindi language. Stardust Magazine is published by Magna Publishing Co. Ltd. The same magazine sponsors annual awards known as Stardust Awards for Bollywood movies. The magazine started in 1951, and it covers an array of genres, including lifestyle, music, movies, show timings, celebrities, health tips, celebrities, and the latest updates about the entertainment world.

Femina Magazine is a Women oriented monthly magazine that is circulated across the globe.  It is published by worldwide media and sponsors the national beauty pageant-The Femina Miss India. The competition is held every year in the country, along with the Femina Look of the Year contest.

Vogue Magazine is one of the leading and top 10 best film magazines in India. The magazine is all about Entertainment, fashion, beauty, lifestyle, celebrities, hot tops related to celebrities’ culture and living, gossips, shows, and whatnot. Vogue India was the first kind of magazine that is completely foreign-owned. Vogue India was founded in the year 2007. The first issue of the magazine featured Priyanka Chopra, Bipasha Basu, and Gemma Ward.

Elle Magazine is one of the most famous and definitely amongst the top 10 entertainment magazines available in India. The magazine features articles related to the entertainment world, latest fashion, celebrities, red carpet, trends, music, and lifestyle. Elle India is an Indian edition of globally circulated magazine-Elle. The Mumbai based magazine was released in the year 1996. It is published by Ogaan Publications Pvt. Ltd.

You may also like: Top 10 Travel Magazines for Wanderlust

FHM- For Him Magazine was men oriented magazine until 1985, where for the first time, a woman, Gina Davis, was featured on the first page. Since then, the magazine covers women achievers across the globe, including actresses, singers, TV stars, and singers. The magazine is also known for its list of FHM 100 sexiest women globally, which features yearly in the master issue. The first edition of the magazine was introduced in India in 2007, which has featured Ujjwala Raut on the cover page. FHM stands out for its unique concept that embraces celebrity photo-shoot and lots more.

Entertainment Weekly Magazine is amongst the top magazines in the India. It keeps readers updated about all the hottest and trending topics. In addition to the latest news and gossips, it covers Bollywood news, the latest movies, music, etc. The magazine is available on digital platforms like Magzter. The magazine is inspired by the American magazine with the same name. It was launched in the year 1990.

Cine Blitz is amongst the noted expensive magazine in India. It is printed monthly. The magazine covers all the current news from Entertainment a.k.a Bollywood. It was started in the year 1975, and in 2006 it was ranked in the list of top 3 entertainment magazines in India. The magazines are owned by Blitz Multimedia Pvt Ltd

Cinesprint is undoubtedly, one amongst the top-10 entertainment magazines available in India. The magazine is the go-to publication for all the Bollywood and Tollywood fans. From articles related to the latest movies, celebrities, and fashion, this magazine keeps its users updated about every possible category that falls under Entertainment. It provides premium content and that you can vouch for. Don’t wait further, and get its subscription now!

Launched in the year 1995, Verve Magazine is of its kind of homegrown luxury and lifestyle magazines in India. This women-oriented fashion magazine provides all the information related to fashion, lifestyle, fashion, Indian models, photography, camera, dressing, nightlife, luxury and design, and many more topics to name. It covers depth interviews with known people from Bollywood and other genres.