All Posts / Entertainment / Famous Tamil Actresses from the TV Industry 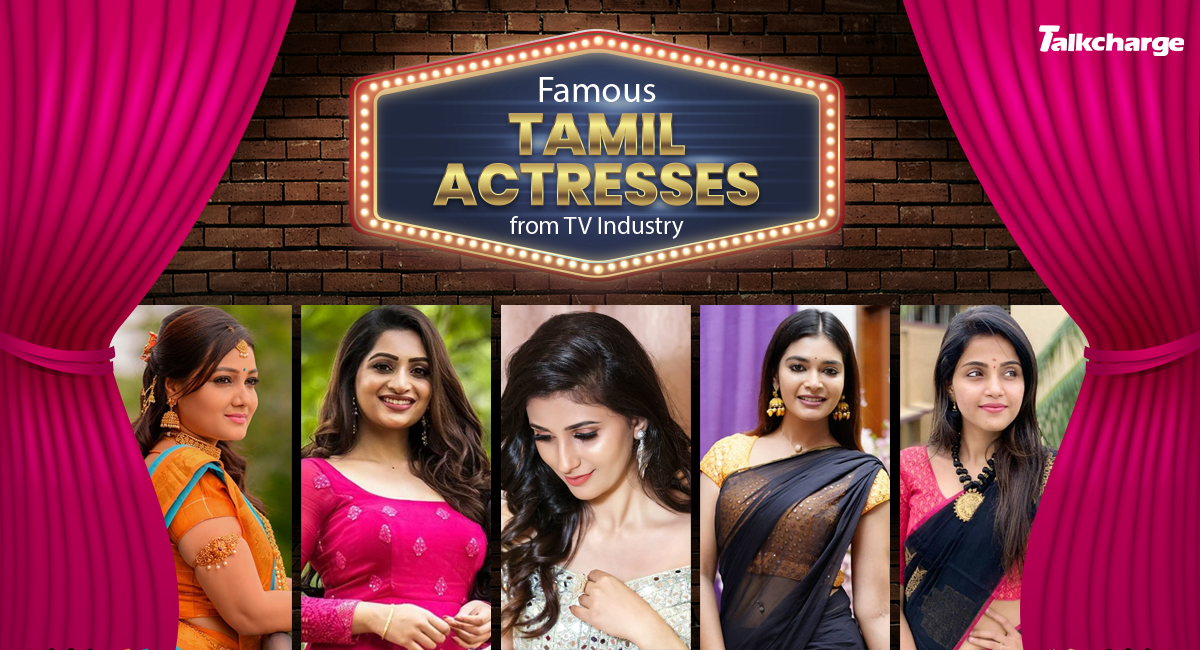 In the last couple of years, Tamil TV industry has gained colossal prominence primarily because of its range of shows, including family drama, reality shows, love stories, etc. These TV serials have also raised the popularity of many Tamil serial actresses. They are known for their respective characters and charismatic personalities that have gained immense love from different parts of the country. This blog has curated names of some of the finest Tamil actresses, which are part of Sun TV, Zee Tamil, and other leading Tamil channels.

List of Top Tamil Serial Actress Names with their Photos

First on our list of leading Tamil serial actresses is stunning Priyanka Nalkari, who is currently basking in the glory of success with her super hit serial Roja, in which she plays the titular role. The family drama is telecasted on Sun TV. The actress has also won Sun Kudumbam Viruthugal for Best Actress for Roja in the year 2019. Priyanka Nalkari marked her debut in 2010 with the Telugu film Andari Bandhuvaya. Following this, she was part of several Telugu movies, such as Kick 2 (2015). Kanchana 3 (2019). Besides Roja, she has been part of many Sun TV serials such as Chandralekha, Poove Unakkaga, Kannana Kanne and Anbe Vaa.

Nakshathra Nagesh is yet another one of the most famous Sun TV Tamil serial actresses. The actress is gaining love from all quarters for her role in Bhagyalakshmi as Bhagyalakshmi. Owing to her immense popularity, the actress has also received critical acclaim. In the year 2018, she was ranked fourth in the list of “desirable women on television listed by the Chennai Times.

Nakshathra started her career in the entertainment industry as a TV host. One of her reality show that got her recognition as best host is Sun Singer! She has also hosted multiple awards shows such as Sun Kudumbam Viruthugal and the South Indian International Movie Awards.

The stunning actress has also acted in several short films such as En Iniye Pon Nilave, Settai, Vaayai Moodi Pesavum. She then appeared in the Tamil language web series -As I’m Suffering from Kadhal from Kadha, produced by Balaji Mohan. She was then signed for Lakshmi Stores, in which she played the key role.

Before stepping into the Tamil TV industry, the actress was known for her dubsmash on various social media platforms. She is also a Tik Tok star. Owing to her popularity, she was offered Run Serial that made her famous in the TV industry. Because of it, she bagged the pivotal role of Parvathy in her current serial Raja Rani 2.

The talented Tamil serial actress Dharsha Gupta has become a household name for her villainous role in Star Vijay show Senthoora Poove. The beautiful actress initially worked as a model and then went on to do several Tamil serials, including Mullum Malarum. The 26-year old actress hails from Coimbatore. Darsha is a fitness enthusiast and has been part of several advertisements that have garnered her many appreciations.

Vaishali Thaniga is yet another famous name in the Tamil serial industry. The actress was first seen in the first season of Tamil famous show Raja Rani and then bagged a good role in the Mappila serial. Besides TV, Vaishali has been part of many movies such as Kathakali and Bairava. The stunning actress is ruling the roost for her characters such as Gayathri, Aishwarya and Meenakshi in serials Magarasi Serial (Sun Tv), Pandiyan Stores (Star Vijay) and Gokulathil Seethai (Zee Thamizh), respectively.

In the year 2015, Divya Ganesh steped into the Tamil TV industry with her show Keladi Kanmani that broadcasted SunTV. Her character “Chembaruthi’ paddled her career, and she was soon recognised for her role. She then played a lead role in Sun TV serial, i.e. “Sumangali”, which made her a household name. She is currently garnering love and appreciation through her character Jennifer “Jenny” Joseph, in Baakiyalakshmi. Divya has also acted in several Tamil movies, including Attu, “6 Athiyayam” and “Indian 2.”

Abi Navya is a well-known Tamil serial actress and News anchor. She debuted in the TV industry with her serials Priyamanawal and Siva Manasula Sakthi broadcast on Star Vijay and SunTV. She is currently working as a news presenter in News J.

Pavani Reddy is one of the most famous Tamil serial actresses. She started her career with her debut movie Login in 2012. The actress was then seen in Rettai Vaal Kuruvi and EMI-Thavanai Murai Vazhkai. In 2017, she went on to play a lead role in the Chinna Thambi, for which she even received critical acclaim. She has also been part of the Malayalam TV serial-Rasaathi. She then appeared in Telugu TV shows such as Neneu Aayana Aruguru Athalalu, Agnipoolu Naa Peru Meenakshi and Srimathi. The actress currently made headlines for participating in Bigg Boss 5 Tamil.

Sindhu Shyam needs no introduction! She is one of the known faces of the Tamil TV industry. In her long, illustrious career, she has acted in several movies and TV serials. The Tamil actress thundered into the industry with her Malayalam film Bhoothakkannadian in 1997. Subsequently, she made it to the Tamil industry with her first show Deivamagal. She was last seen in Tamil show Run as Meenakumari.

Born in Bangalore, Rachita is a popular name in the South TV industry. The actress became a household name with her serial Saravanan Meenatchi that aired on Star Vijay. Her character Meenatchi gained love from all the quarters. She is currently playing the protagonist role in Naam Iruvar Namakku Iruvar 2 that broadcast on Star Vijay. Besides this, she would also be soon seen in the Kannad movie Ranganayaka.

With the better quality content of Tamil TV serials, several shows have gained immense popularity. These serials have given a suitable platform to actresses, and many of them, such as Priyanka Nalkari, Pavani Reddy etc., have become household names.