List of Best Comedy Movies in Tamil to Watch in 2022 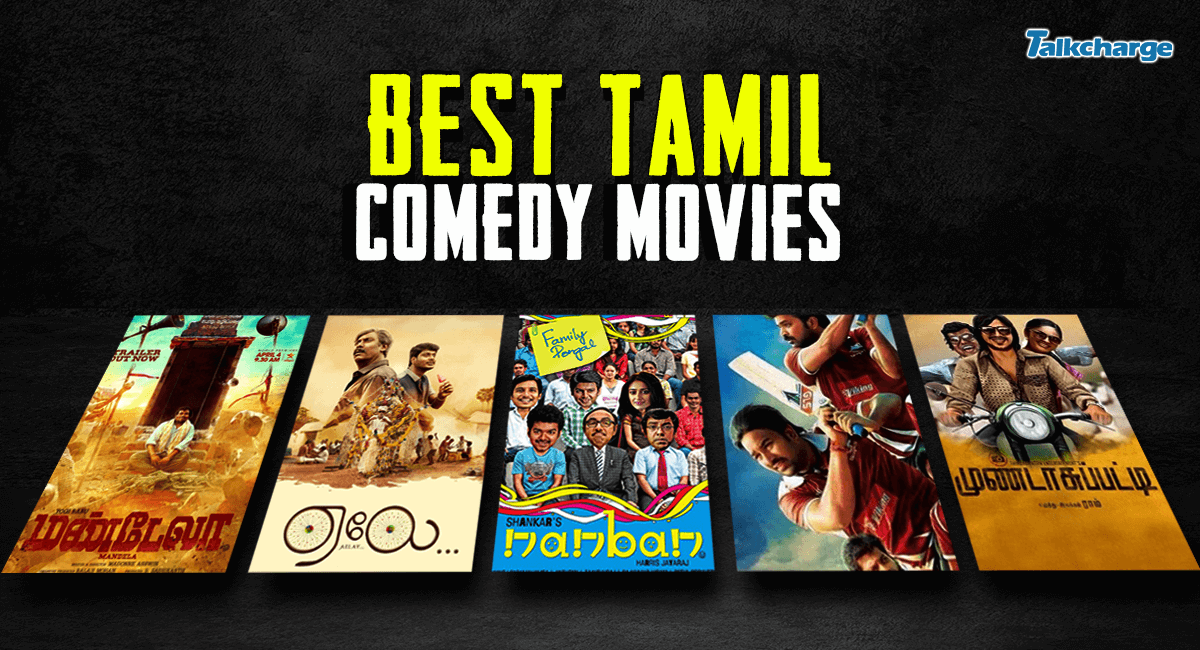 In the last couple of years, Tamil Cinema has given us some of the best movies in different genres. Owing to their intriguing stories and breakthrough performances of the actors, the industry has come a long way. Besides action-packed movies, the industry has numerous comedy movies to its credit that have amazed the audience with their narrative. In case you are looking for a Tamil comedy movies list that would tickle your funny bones, then you are right place. Here we have listed our favourite comedy movies of Tamil Movies that would surely be stress buster after your long hectic day.

With the backdrop of elections, Mandela is a nicely curated Tamil movie. The president of the village gets paralysed before elections. Both the sons decide to contest the election leading to a competition between both to get the highest vote. As a matter of fact, they both get the same number of votes. To break the tie between the both rely on the hairstylist named Nelson Mandela, whose single vote can make either of them win. During all this chaos, the audience will get to see the best of the comical moments that would surely make them rolling on the floor. You can watch this top-rated Tamil movie on Netflix and enjoy the movie with your family and friends.

Relay is sweet, fun, rural drama! The story of the movie mainly revolves around the sweet and sour relationship of the father-son duo. The neo-realistic comedy will make you laugh throughout! The film starts with the dead body of Muthukutty (Samuthirakani) lying on the floor. The entire family is in grief, but his son, who is looking for an eatable, has shown no sorrow for his father’s death. Soon you will see flashbacks wherein Muthukutty was an ice-cream seller. He indulged in wrongdoings in order to meet both ends, which his son does not like. The second half of the movie would keep you intrigued with this interesting story. This recently released movie is indeed one of the best comedies of Tamil Cinema. You can watch this and many other top-rated Tamil films on Netflix.

With the theme of streets cricket, Chennai 600028 is all about friendship, love, and rivalry. The movie’s tale concentrates on two cricket teams- Royapuram Rockers and Sharks, who are considered to be sworn enemies of each other. On the one hand, Royapuram Rockers are top of their game, and the Sharks are trying their hard to win a single match. But the team’s destiny changes when a player from the leading team gets enrolled in the other. Undoubtedly, Chennai 600028 is one of the top-rated Tamil comedy movies. What happens following forms the entertaining climax that would surely leave you all in smiles.  The movie also has its sequel with the same name that was realised in 2008 and was an extension to its prequel.

This Tamil-language period comedy is set in the fictional village, Mundasupatti. The film’s tale revolves around the village whose locals are superstitious about photography as they think people who are photographed die soon. On the other hand, a photographer visits the village on assignment and struggles to prove their notions wrong. While the situation might look severe but the between punches would keep making you laugh. This is indeed one of the best comedy films in Tamil.

What sets part of this black comedy is its script that has a series of one-liners that will amuse and keep you entertained for long. The movie concentrates on four poverty-stricken adults and their antiques to rib a house. The movie has not a single dull movie and would keep you intrigued till the end. The film was the directorial debut of the famous director-actor Naveen, who has also acted in the film.

Nandan is one of the top-rated coming-of-age-comedy-drama and Tamil remakes of the Bollywood Blockbuster film 3 Idiots (2009). The film is a story of two good friends who hunt their familiar friend whom they last met years before, on their last day of college. While searching for him, they recount their fun-filled college days and how he helped them to achieve what they wish to. The movie also talks about the current social pressures under the Indian education system in the right manner. The movie is a sheer delight to watch. It has all the elements that would turn your three hours into a joyride!

Kalakalappu is next on our list of best comedy movies in Tamil. What makes this movie a perfect entertainer is its star cast, especially Santhanam and Shiva who have not left any stones unturned to tickle your funny bones. The movie is a laugh riot! Set in Kumbakonam in Thanjavur district, the movie is about two brothers to plans to revive their ancestral restaurant that flourished years back. The USP of the movie is its cinematography and editing that has been done by U.K. Senthil Kumar, Praveen K.L. and Srikanth N.B., respectively. In addition, the movie has some of the best songs that would definitely make you hum along. While it is said to be a sequel of 2002 released Kalakalappu but both the movies do not have anything similar.

With one of the best comedians of Tamil Cinema, Santhanam and the ace actor, Arya, Boss Engira Bhaskaran will give you a bundle of laughs. The film revolves around Bhaskaran (Arya) who does not have any interest in academics. He falls in love with Chandrika (Nayanthara) and pledges to go to any extent in order to marry her. He faces many obstacles to prove himself, which indeed it does towards the end. The movie was commercially successful. Owing to its success, the movie was remade in Bengali and Kannada as Raja Rani Raji (2018) and Parijatha (2011. This Tamil movie is currently available on Hotstar + Disney.

Next in our list of top-rated comedy movies in Tamil is Chandramukhi. With the megastar Rajinikanth in the lead, you can expect 3 joyous hours. The movie would at times tickle your funny bones and at times make your heart miss a beat because of its scary antics. This cult classic revolves around an NRI and his wife who determines to live in their ancestral house despite the fact that the property is haunted. The climax of the movie is a big attraction, making it one of the best comedy Tamil movies Superstar Rajinikanth.

There would be hardly any Tamil movie lover who has not seen this classic. The movie concentrates on two friends who end up in a number of comedy errors and consequent chaos with their girlfriends and respective families. Owing to the success of the movie, it was remade in Hindi IN 2010 AS Houseful that had Akshay Kumar, Ritesh Deshmukh and Dipika Padukone in the lead.

Tamil Cinema is gaining a huge prominence with the kind of movies the industry is making. Talking about the comedy movies of Tamil, they are sheer entertainers. In this blog, we have curated a Tamil comedy movies list, the list has names of movies that you should watch on the OTT platforms.

Yes, Nanban is a remake of the Bollywood movie Three Idiots.

2. Is Chandramukhi is a real story?

No, Chandramukhi is not based on the real story. The Tamil movie is the remake of the Malayalam film Manichitrathazhu.