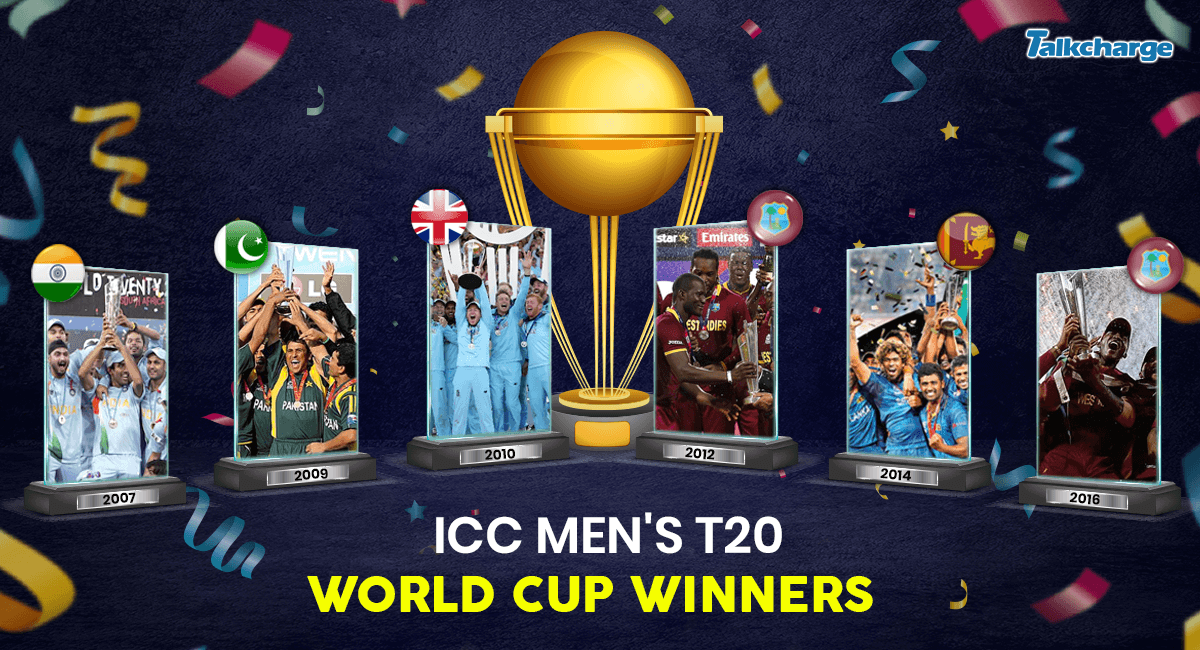 Twenty20 cricket- the shortened format of cricket has become a fan favorite in a short period. The 20 Over series offers quality cricket matches to watch with continuous moments of thrill and excitement for square four hours or so, compared to longer formats of the game. The ICC Men’s T20 World Cup is the most awaited international championship of T20 International Cricket. Each tournament consists of 12 to 16 teams and is organized by the International Cricket Council (ICC) every two years. All test-playing nations participate in the T20 World Cup with a few associate states as well. The inaugural tournament was held in South Africa in 2007. Since then, six World Cup tournaments have taken place wherein the best T20 teams have competed fiercely to make it to the hallowed T20 World Cup Winners List. Scroll down for the list of winners of all the ICC Men’s T20 World Cup tournaments.

The 2007 ICC World Twenty20 will always remain special in the history of the T20 world cup as it was the beginning of the Twenty20 International cricket world championship. The tournament was hosted by South Africa, and 12 teams participated in it. In the final, India defeated Pakistan and won the match by 5 runs after scoring 157/5 in 20 overs against 152 all out by Pakistan in the second innings. The tournament would also be remembered for Indian cricketer Yuvraj Singh’s blitzkrieg against England in the Semi-Final as he hit six 6’s in a single over off Stuart Broad and went on to score a blistering half-century in 2 overs (12 balls).

The 2007 ICC World Twenty20 had 27 matches, and the former Pakistani cricketer Shahid Afridi was the Player of the Series. Mathew Hayden of Australia scored the maximum number of runs (265) in the tournament, while most wickets were taken by Umar Gul (13) of Pakistan.

The 2009 ICC World Twenty20 was the 2nd T20 international Twenty20 Cricket World Cup tournament. Pakistan reached the final of the tournament for a consecutive time and faced off Sri Lanka in the final. This tournament too had 12 teams, and Pakistan won the match by 8 wickets. Pakistan went on to make 139 runs at the loss of 2 wickets in response to Sri Lanka’s made 138 runs at the loss of 6 wickets in 20 overs. Sri Lankan player Tillakaratne Dilshan made the most runs (317) in the tournament and was also the Player of the series, while Umar Gul from Pakistan took the most number of wickets (13). India’s performance in the tournament failed to live up to the expectations of the fans when they were knocked out in the super 8 stages itself.

In the year 2010, the T20 World Cup trophy was bagged by Team England. The runner-up team-

Australia opted to bat first and went on to make 147 runs and loss of 6 wickets in 20 overs. The English outdid the Aussies with 148 runs at 3 wickets from just 17 overs and went on to bag their maiden T20 World Cup trophy by 7 wickets. With his remarkable performance, Kevin Pietersen of England has been adjudged the Player of the Series due to his remarkable and consistent performance throughout the tournament.

Mahela Jayawardene of Sri Lanka scored the maximum number of runs (302), while most wickets (14) were taken by Dirk Nannes of Australia. The competition again had 12 teams, and it was the debut season for the Afghanistan team that had finally made its way to one of the ICC’s international cricket tournaments. India continued with its dismal performance and was again ejected from the tournament in the Super 8 stage.

This was the fourth edition of the Twenty 20 World Cup, and team West Indies made its name on the T20 World Cup winners list by scoring 137 runs in 20 overs and Sri Lanka capitulating at a mere 101 runs all out in 18.4 overs. The ace Australian cricketer – Shane Watson was the highest run-getter in the tournament with 288 runs under his belt. He was also awarded the Player of the Series title. On the other hand, Ajantha Mendis from Sri Lanka bagged 15 wickets, the highest in the tournament.

Having won the One-day international ICC World Cup just a year ago in 2011, India failed to reprise its dominating performance in the T20 World Cup in 2012. They have knocked out again at the group stage, although on account of a poor net run rate.

After losing the finals of the 2012 ICC World Twenty20, Sri Lanka got its 1st victory in the 5th edition of the ICC Men’s T20 World Cup, defeating India by 6 wickets in the final match. India chose to bat first and made 130 runs in 20 overs, while Sri Lanka scored 134 runs in just 17.5 overs and lifted their maiden trophy.

16 teams competed in the tournament with, Nepal featuring in an ICC international tournament for the first time. During the tournament, 3 players outshone others with their phenomenal performances. Virat Kohli, the current captain of the Indian team and one of the richest cricketers in the world, gave a spectacular performance with the bat scoring 319 runs and earning the Player of the Series title. Imran Tahir from South Africa and Ahsan Malik from The Netherlands scalped 12 wickets each- the highest amongst all the bowlers in the tournament.

To date, West Indies is the only team that has become a T20 World Cup winner for two times. The sixth edition of the ICC World Twenty20 was hosted by India. Also, it was the second tournament that featured 16 teams. The fact that it was the last tournament in the last five years due to the Pandemic, as the tournament was postponed in the year 2020, makes it one to remember. Hopefully, the Pandemic subsides to let the fans enjoy the tournament in 2021.

The tournament will also be remembered for its captivating final and especially the last over wherein West Indies needed 19 runs off 6 deliveries. Carlos Braithwaite of West Indies scored 4 consecutive sixes off Ben Stokes of England to win the match by4 wickets. West Indies chased down England’s score of 155-9 (20 Over) by making 161-6 (19.4 Overs).

Virat Kohli was declared the man of the series, and Tamim Iqbal scored the highest number of runs-(295). And, the Afghanistan player -Mohammad Nabi took most of the wickets, i.e. 12 in the tournament.

The ICC T20 World Cup 2021 was the seventh edition of all tournaments. Firstly, the match was about to take place in Australia from October 18 to November 15, 2020. However, in July 2020, due to the COVID-19 outbreak, ICC declared that the event has postponed. Lastly, on October 17, 2021, the tournament started and lasted till November 14, 2021. During the tournament, New Zealand was the first team to grab a place in the final match and along with this, it was the first time that it got selected for the final rounds of the T20 World Cup. Australia also joined in the final rounds and along these lines, it qualified for a T20 World Cup final for the second time.

In the first semi-final of the match, Pakistan defeated New Zealand by 7 wickets and emerged as the first team to reach the final rounds. Thereafter, England defeated India by 10 wickets ad became the second finalists. Finally, England won over Pakistan by 5 wickets. For the second time, England won the ICC Men’s T20 World Cup trophy. The English cricketer Sam Curran received the title of Player of the Match as well as the Player of the tournament.

Keep visiting this blog to know the latest updates on the upcoming T20 World Cup winners.

ICC T20 World Cup or ICC World Twenty20 is contested between 12 to 16 teams every 2 years. The international championship of Twenty20 International cricket was started in 2007, in which Team India was the first to make its name in the list of ICC Men’s T20 World Cup Winners. The last tournament was supposed to be held in 2020 and Australia was supposed to host it; however, due to the spread of the Novel Coronavirus, the tournament is postponed to 2021, and India would be the host country. Let us hope the fans get to cheer for their favorite team, and the Pandemic does not yet again play spoilsport. Wishing Team India all the best!

1. How many times has India won the T20 world cup?

5. How many times did Pakistan beat India in the Champions Trophy?

Combining all the tournaments, India has defeated the Pakistan team 13 times and has lost 2 times to Pakistan.

After the 2016 ICC World Twenty20, the tournament was slated for 2020; however, due to the onset of the Pandemic, the competition is now postponed to 2021.