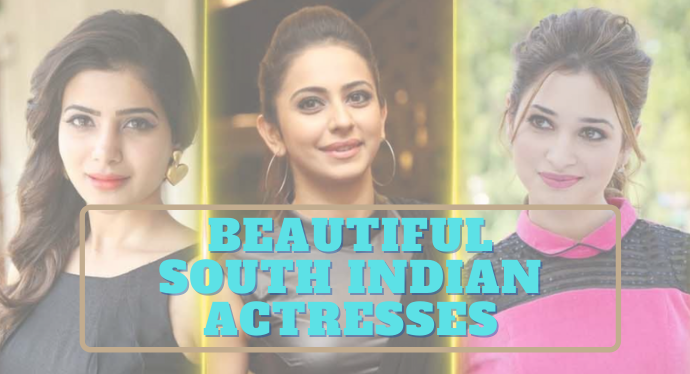 Do you know what is common between – Hema Malini, Rekha, and Late Sridevi? Yes, they all are celebrated Bollywood goddesses! But do you know before making big in the Hindi Cinema, these actresses made their debut in the South Cinema and were quite famous in the industry. Taking a cue from these veteran actresses, we have Aishwarya Rai and Deepika Padukone, who have also made it large in Bollywood. Following their footsteps, there are many beautiful and talented South Indian actresses who are leaving no stones unturned to impress their audience with their acting skills.

List of Young and Most Beautiful South Indian Actresses

Anushka is one of the richest and highest paid South Indian actresses. She is also known as Lady Superstar of South Indian cinema.

The stunning actress first appeared in 2005, Telugu movie ‘’Super’’ for which she received her first nomination in Filmfare as the Supporting Actress-Telugu. Soon she was cast in the Vikramarkudu, which was a major commercial success.

After the series of hits, she established herself as a leading actress in Telugu cinema. She is best known for her powerful acting in movies like Baahubali and Singham. The actress has made it big in the South Indian industry without a godfather.

Kajal Aggarwal is the leading South Indian actress who predominantly works in Telugu and Tamil film industry. The damsel is known for killer looks and natural acting skills that have garnered her many accolades.

Though the actress started her career with Bollywood movies but it was South Indian movies that got her recognition. Today she is one of the top-rated South Indian actresses who is ruling the Tollywood industry.

To your surprise, she is one of the first South Indian actresses who have her wax statue in Madame Tussauds in Singapore. Besides movies, the A-lister actress also has many endorsement projects in her kitty. Kajal recently got married to entrepreneur Gautam Kitchlu.

The diva made her acting debut with the Telugu film ‘’Jhummandi Naadam’’ in the year 2010. After doing a series of successful movies in the Telugu Industry, the actress got a big break in Bollywood with ‘’Chashme Baddoor’’. It is one of the best Bollywood comedy movies of the year which made gave her recognition in the industry.

The actress received many accolades for her strong role in ‘’Pink’’, ‘’Mission Mangal’’ and ‘’Saand Ki Aankh’’, and ’’Thappad’’. Pannu would be soon seen in her upcoming film ‘’Haseen Dillruba’’.

Tamannaah Bhatia is one of the best South Indian actresses. She was only 15 when she first appeared in the Bollywood movie ‘’Chand Sa Roshan’’. Tamannaah then made her debut in the Telugu industry with her film Sri, following which she worked in the Tamil movie industry.

Some of her successful projects include ‘’Baahubali: The Beginning’’and ‘’Sye Raa Narasimha Reddy’’. She is also one of the highest-paid actresses in the South Indian industry. She has acted in more than 65 movies.

The stunner marked her debut in the film industry with the Kannada film called Gilli in the year 2009. Post which she marked her entry in the Telugu movies.

Rakul has become a famous South Indian actress who has her foot in Bollywood movies as well. She has acted in Hindi movies like Yaariyan and De De Pyaar De. The actress has many big banners projects in her kitty.

She started her acting journey as a child artist. The beautiful actress has won many hearts for her looks and powerful acting. She is best remembered for her portrayal in the serial Shaka Laka Boom Boom and movie Koi Mil Gaya. She made came back with Himesh Reshammiya starrer ‘’Aap Kaa Surroor’’ in 2007.

The actress then moved to the South Indian industry and has been part of many successful Telugu movies like ‘’Desamuduru’’, ‘’Kantri’’ etc. She has also worked in Tamil movies that include Velayudham, Engeyum Kadhal.

Shruti Haasan is the eldest daughter of the celebrated and richest South Indian actor – Kamal Haasan. It was her acting skills that helped her make big in the South Indian industry. This stunning actress made her debut in the Bollywood with movie ‘’Luck’’ in the year 2009.

Her Telugu movie- Oh My Friend- got her recognition and best Filmfare Award for Best Female Debut – South. She is now a well-established South Indian actress.

Besides acting, Shruti Haasan is also a well-known playback singer. She has also won Filmfare Awards for Best Female Playback Singer – Telugu for “Junction Lo” in Aagadu in 2014. Not many know, but Shruti started her career as music director with her father’s production ‘’ Unnaipol”, today she has her band.

Shriya Saran is one of the beautiful South Indian actresses who have acted in multi-language movies. You might remember her as Ajay Devgan’s wife in the movie Drishyam. She made her debut in 2001 with Ishtam and got commercial success with her 2002 release-‘’Santosham’’.

She has also been part of the highest-grossing Indian movie – Sivaji in which she was paired opposite Rajnikant. She has also worked in the Malayalam movie industry.

Amala Paul is an Indian actress who has predominantly worked in Telugu, Malayalam, and Tamil movies. She got critical acclaim for her titular role in the movie ‘’Mynaa’’. After the success of the movie, Amala became the new top star of 2011. The actress would be soon in the Cadaver and remake of Lust Stories.

Next in our list of most beautiful South Indian actress is Raai Laxmi. The actress started her career with her Tamil movie Karka Kasadara. For her role in the movie Dhaam Dhoom, the actress received her first nomination in the Filmfare award for Best Supporting Actress category.

She has also worked in Malayalam movies like Rock & Roll, opposite Mohan Lal. In the year 2009, she became an established actress in South Cinema after giving several successful films that include Naagar, Evidam Swargamanu, and many others to name.

Trisha Krishnan is one of the best South Indian actresses, who has worked in many Hindi movies and South Indian movies. She started with her film Jodi in the year 1999; post wishes she played a significant role in Telugu superhit movie ‘’Varsham’’. The actress has also worked with Akshay Kumar in movie ‘’Khatta Meetha’’.

Next in our list of most beautiful South Indian actresses is Nithya Menen. The gorgeous actress has been part of Telugu, Kannada, Malayalam, and Telugu movie industry. She has also won the Filmfare award three times.

The damsel is also a talented singer and has been nominated for the best female playback singer for the song Ammammo Ammo in Ala Modalaindi.

The actor turned producer Charmy Kaur has worked in South Indian and Hindi cinema. The actress has appeared in more than 40 movies. Some of her noteworthy projects include ‘’Mass’’, ‘’Lakshmi’’, ‘’Pournami’’, and ‘’Rakhi’’. In the year 2007, she played a significant role in the film Mantra, for which she received the state Nandi Special Jury Award.

The beautiful actress has also made her presence in Hindi cinema alongside Amitabh Bachchan in the film ‘’Bbuddah… Hoga Terra Baap’’.

The glamorous actress Lakshmi Manchu has worn many hats over the years. From working as a producer to television presenter, the actress has also done many supporting roles before becoming an established actress in South Indian cinema. She has also seen in the American Television series called Las Vegas.

Samantha Akkineni, now known as Ruth Prabhu, has established her career in the Tamil and Telugu film industry. She is a recipient of many prestigious awards, including Filmfare Awards. The stunning actress has won the hearts of many with her impactful acting skills and beauty.

Besides movies, she is a significant part of many well-known brands and has her own NGO that provides support to children and women. Samantha Akkineni is now married to the famous actor Naga Chaitanya.

The stunner is one of the established South Indian actresses. Nayanthara joined acting in 2003 with a Malayalam film, and since then, she has raised the bar with her powerful acting skills.

The actress has many successful movies in her kitty that includes ‘’Chandramukhi’’, ‘’Adhurs’’, and ‘’Raja Rani’’. She has also received the Nandi Award and Filmfare Award for Best Telugu Actress for her role as Sita in the movie-“Sri Rama Rajyam.”

The national award-winning actress mainly worked in the Telugu, Tamil, and Malayalam industry. The gorgeous actress started her career as a child artist in 2000 and came back in 2014 with her movie Ring Master.

Some of her notable projects include ‘’Mahanati’’, in which she played the role of the veteran actress Savitri; she also received critical acclaim for the same in the year 2018. She would be soon seen in movies like ‘’Miss India’’, ‘’Good Luck Sakhi’’, and ‘’Marakkar: Arabikadalinte Simham’’.

Sai Pallavi is an Indian actress and a dancer. She is best known for her significant role in a Malayalam movie- ‘’Malar’’ in the year 2015. After this, she forayed into Tamil and Telugu movies such as ‘’Fidaa’’. The actress is born in Tamil Nadu and has roots in classical dance.

The Delhi-based actress has worked in the Tamil and Telugu film industries. She marked her debut in the Bollywood movie – ‘’Madras Café’’ in the year 2013. The actress has appeared in many commercially successful movies that include ‘’Supreme’’, ‘’Bengal Tiger’’, and ‘’Tholi Prema’’, and many others to name.

Along with acting, the actress is also well known for her singing. She has lent her voice in movies like ‘’Joru’’, ‘’Balakrishnudu’’, ‘’Villain’’, ‘’Oorantha Anukuntunnaru’’, and ‘’Jawaan’’.

Ileana D’Cruz is amongst the established South Indian. The actress is credited for her portrayal in the Telugu movies like ‘’Devadasu’’, ‘’Pokri’, and ‘’Jalsa’’. The actress is also part of many Bollywood films that includes ‘’Barfi!, ‘’Main Tera Hero’’, ‘’Rustom’’, ‘’Baadshaho’’, and ‘’Raid’’. The beautiful actress has shunned the critics with her powerful acting and good looks.

1. Who is the most beautiful south Indian actress?

Above we have listed names of all the most beautiful actresses of South Indian Cinema.

2. Who is a famous actress in South India?