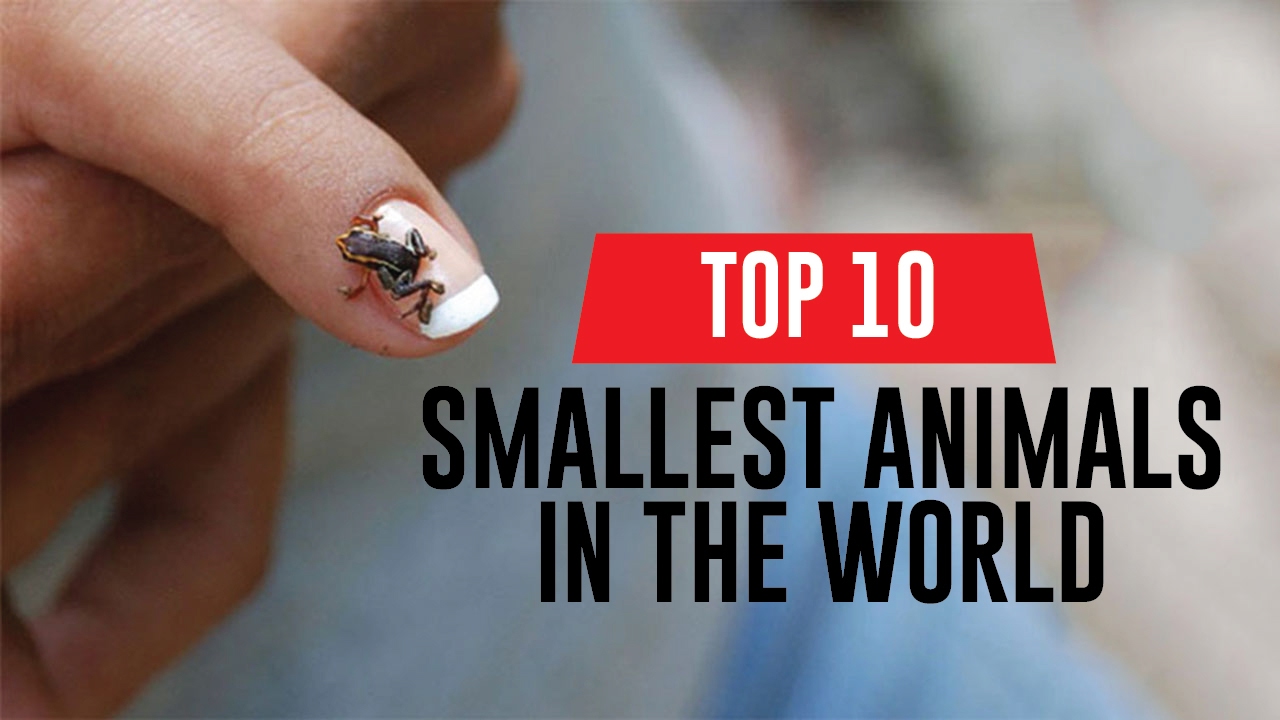 It’s a matter of fact that human beings are comparatively larger species, making most living animals a smaller one. There are millions of species of animals which are dwarf than human beings and literally many of these animals are even smaller than a human hand. Though we think that being huge is better, but for animal species this is not certainly the same case. The smaller creatures require fewer resources to endure and have numerous choices to be out of sight from predators.

With a huge number of flora and fauna on the earth, scientist tends to discover a new animal or plant each year, some of them are different from others because of their large appearance or are too small to be seen from the naked eyes. In this blog, we have curated more than 15 smallest animals in the world. These animals are known for their small body type and nature of living. While some of them are critically endangered, one of them are recently discovered. So, what is the smallest animal on earth? Read more about some of the world smallest animals.

The Pygmy Rabbit is one of the smallest animals in the world. This species digs its burrow. This animal is believed to be the world’s smallest leporid. What makes them different from other rabbits is their small size, gray color of the body, short ears, small hind legs, and no fussy white fur. Pygmy Rabbit is found in areas with deep soil, tall, dense sagebrush, which is their food and shelter.

Next in the smallest animal in the world is Pygmy Marmoset, which is the smallest monkey on the earth. This animal is found in the green and river-edge forest, and it feeds on the gum. It has the ability to rotate its head 180 degrees

This is the smallest snake on the earth, which is known to mankind. Barbados Threadsnake was identified in the year 2008. These species need forest habitat for survival.

Madame Berthe’s Mouse Lemur is also one of the smallest animals in the world. This primate is named after primatologist and conservationist of conservationist-Berthe Rakotosamimanana. Most of the time, the species found sleeping either along with another lemur on the leaf or in their nests.

Also known as Turquoise Dwarf Gecko, Williams’ Dwarf Gecko is also the world’s smallest animal on the planet. This distinguished lizard is known for its unique color. To your dismay, this species is endangered, and its population is declining rapidly.

Also known as Chersobius Signatus, and the speckled tortoise is the smallest animal on the land. Like their relatives, Speckled Padloper finds it difficult to adapt to the environment’s change and captive diet. The species is found in the restricted region of Namaqualand in South Africa.

The Etruscan Shrew has many names that include white-toothed pygmy Shrew and Etruscan Pygmy. It is the smallest mammal in the world. This animal feeds on vertebrae and invertebrates like insects. It hunts on the individual of the same size. They prefer to live in a damp and warm climate are distributed in the 10° to 30°N latitude from Europe and North Africa to Malaysia. The species is endangered in many parts of the world.

It is the smallest species of bat and one of the most smallest animals in the world. It has a gray or reddish-brown coat with a pig-like snout. The species roosts in the caves of limestone hills.

The length of Brookesia Micra is between 23-25 mm, and maximum it could go to 29mm, which makes its smallest chameleon on the earth. The species live on leaf litter in the day, and at night, they climb up into the tree branches to sleep. These are also known to be the smallest reptiles in the world.

This dogfish shark is the smallest animal in the water. This shark has distinguished features that include its small size, black ventral marking, long flattened head, and mid dorsal line.

Monte Iberia Eleuth is popularly known as Monte Iberia dwarf frog. This is the smallest frog on the land and is critically endangered. It is native to easternmost Cuba. This species of from was introduced in the year 1933 in Mount Iberia from where it got its name.

Paedocypris is the tiniest cyprinid fish that resides in streams and swamps of the Asian Islands. They have a transparent body that lacks the typical features of a fish.

This species was introduced in the year 2009. It is one of the smallest vertebrates and the smallest animal to live on the world’s land.

1. Which animal has the smallest heart?

2. What are the smallest ocean animals?

There are variety of species found in the water which are tiniest than anything. Some of the world’s smallest animals found in water are Marine Viruses, Algae, Dwarf Lantern Shark and Sexy Shrimp are the smallest ocean animals.

3. Which is the smallest animal on land?

The bumblebee bat is the smallest mammal on the earth.

4. Which is the smallest animal in India?