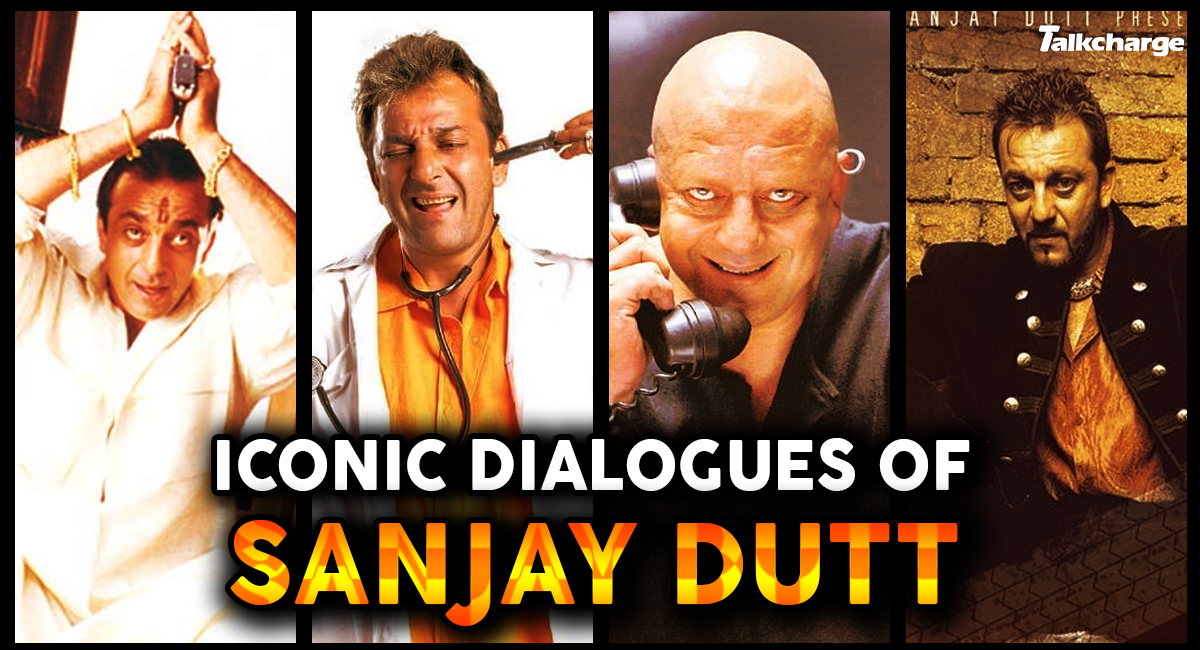 Sanjay Dutt, aka Sanju Baba, is amongst India’s very few superstars who have garnered a dedicated fan following without being boxed into the stereotypical hero of the silver screen. The actor thundered into Bollywood and shot to fame with his debut movie Rocky in 1981. His Blockbuster movies, Saajan (1991) and Khal Nayak (1993) established Sanju baba as the box-office superstar as well as one of the few actors of the 90s with a versatile range.

He capitalised on his legacy of being ‘bad boy’ in his cult classic Vaastav: The Reality in 1999, which was another millstone in his career. The actor then proved his mettle in the comedy genre with his 2003 released Munna Bhai M.B.B.S and has not looked back since.

Whether it is Ballu in Khal Nayak, Munna in Munna Bhai, M.B.B.S. and Lage Raho Munna Bhai or Kancha Cheena in Agneepath, Sanjay has played diverse characters, in his 40-year long illustrious career and his each character has left an indelible impression on the audience.  Sanjay Dutt’s dialogues and his peculiar style have helped him carve a niche for himself in the highly competitive movie industry. Recipient of several awards, including two Filmfare Awards and three Screen Awards, Sanjay Dutt is a marvel of Hindi cinema. Saluting his vast body of work, here we have compiled some of his dialogues and one-liner that have etched in our minds.

Released in 1993, Khal Nayak gave a colossal boost to Sanjay Dutt’s career. This Hindi crime action thriller film was directed by Subhash Ghai and had Sanjay Dutt, Jackie and Shroff, Madhuri Dixit in a pivotal role. Khal Nayak is also known for its famous song “Choli Ke Peeche Kya Hai”. The film revolves around Ballu, a gangster! Sanjay received many praises for his villainous character- Balaram a.k.a “Ballu” Prasad.

Vaastav: The Reality is a 1999 released action crime film starring Sanjay Dutt and Namrata Shirodkar in the key role. Sanjay received a Filmfare award in the best actor category for the movie. His character Raghunath “Raghu” Namdev Shivalkhar is regarded as one of the memorable onscreen characters in India.

Undoubtedly, Murli Prasad Sharma (Sanjay Dutt) is one of the favourite goons of Hindi Cinema. He is known for his quirky style and loud behaviour; above all, he had a heart of gold and, not to forget, his jadoo ki jhappi, which could melt anyone’s heart. Directed by Rajkumar Hirani, Munna Bhai M.B.B.S. is one of the best movies of Dutt’s career. The movie also has Sanjay’s father, late actor Sunil Dutt, Arshad Warsi and Boman Irani.

Some of the memorable dialogues of Sanjay Dutt from the movie:

Directed and produced by Sanjay Gupta, 2004 released Musafir is one of the best action thrillers. The movie has Sanjay Dutt as Billa, Anil Kapoor as Lucky, Aditya Pancholi as Inspector Tiger, and Sameera Reddy as Sam in the lead role. The film earned a houseful collection at the Box Office. With his character, Sanjay left a strong impression on the hearts of the audience. The audience also liked his look in the film.

Rajkumar Hirani directorial, Lage Raho Munna Bhai, is a sequel to Munna Bhai M.B.B.S. The movie advocates the philosophy of Mahatma Gandhi. Dutt was in top form as the lovable mafia Munna, who embraced ‘Gandhigiri.’ Besides him, Arshad Warsi reprised his character ‘Circuit’ from its prequel and shared the same commendable camaraderie with Munna. The film also has Vidya Balan and Boman Irani in the prominent role.

Some of the inspiring Sanjay Dutt Dialogues from Lage Raho Munna Bhai are:

Based on the real Lokhandwala Complex shootout that took place in 1991, Shootout at Lokhandwala is one of the best movies by Sanjay Dutt. With his on-point dialogue delivery and acting skills, the actor aced the role of Additional Commissioner of police. He has some of the best dialogues in the movie that have inspired many.

Dutt’s powerful dialogues from the movie Shootout at Lokhandwala:

Karim Moussa was one of the prominent characters in Luck. Sanjay Dutt not only justified the role with his strong personality but also mouthed some of the best dialogues that have over the years become synonym with Dutt. The movie was written and directed by Soham Shah and had Sanjay Dutt, Mithun Chakraborty,  Shruti Haasan, Imran Khan, Danny Denzongpa, Ravi Kishan and Chitrashi Rawat in the key roles.

While this romantic family drama revolved mainly around Ajay Devgan and Sonakshi Sinha, Dutt’s character – Balwinder “Billu” Singh Sandhu, was highly appreciated for his looks and dialogues. The movie was hit at the Box office, and so are Sanju baba’s quirky dialogues that could make anyone laugh!

The multi starrer film Kaante had Sanju Baba in a grey character. The movie was directed by Sanjay Gupta and earned much appreciation from critics and the audience. The 2012 released film is also remembered for its remarkable dialogues that were uttered by baba.

His puffed-up eyes, dreadful look and wicked smile in Agneepath garnered Sanjay Dutt appreciation from all the quarters. His villainous character, Kancha Cheena, is amongst the most iconic characters in Bollywood. In order to get into the skin of the character, the actor got bald and even pierced his ear. Besides his look, Dutt dialogues from Agneepath also become quite famous and have left a strong impact in the audience mind. Directed by Karan Malhotra, the movie also had Hrithik Roshan, Priyanka Chopra Jonas and Rishi Kapoor alongside Sanjay Dutt and was a super hit.

Some of the hard-hitting yet famous dialogues of Sanjay Dutt as Kancha Cheena from Agneepath are:

Directed by Anand Kumar, Zila Ghaziabad is a political action thriller film. It features Sanjay Dutt, Vivek Oberoi, Arshad Warsi in lead roles. The story of the movie is inspired by the true story of the gang wars of Ghaziabad. Sanjay Dutt played the role of controversial police officer-Pritam Singh. The actor justified his role by delivering the power-packed dialogues that raised his acting career a notch higher.

Sanjay Dutt and Arjun Kapoor starrer Panipat may not have done well at the box office, but it is applauded for its extravagant sets and well-researched characters. Amongst all the characters, Sanjay Dutt’s character as Ahmad Shah Abdali stood out. The actor looked breathtaking as the Afghan king. His dialogue delivery, costumes, and body language seamlessly fitted the skin of his character. Panipat was directed by Ashutosh Gowariker and was based on the real events that took place during the Third Battle of Panipat.

One of his dialogues from the movie that punctuates his character is:

There would be hardly anyone who does not know about Sanjay Dutt-one of the gems of Bollywood! The actor has worked in more than 180 movies ranging from crime thrillers to love stories, comedy to romantic that have earned him a super star status. Admiration and love for him spans generations for his unique style and several dialogues like Asli hai asli … pachaas tola, pachaas tola … kitna, pachaas tola from Vaastav, Woh bahar casualty mein koi marne ki haalat mein raha … to usko form bharna zaroori hai kya? From Munna Bhai MBBS and many others!