Sa Re Ga Ma Pa Winners, Runner-Up, Host & Judges of all the Seasons 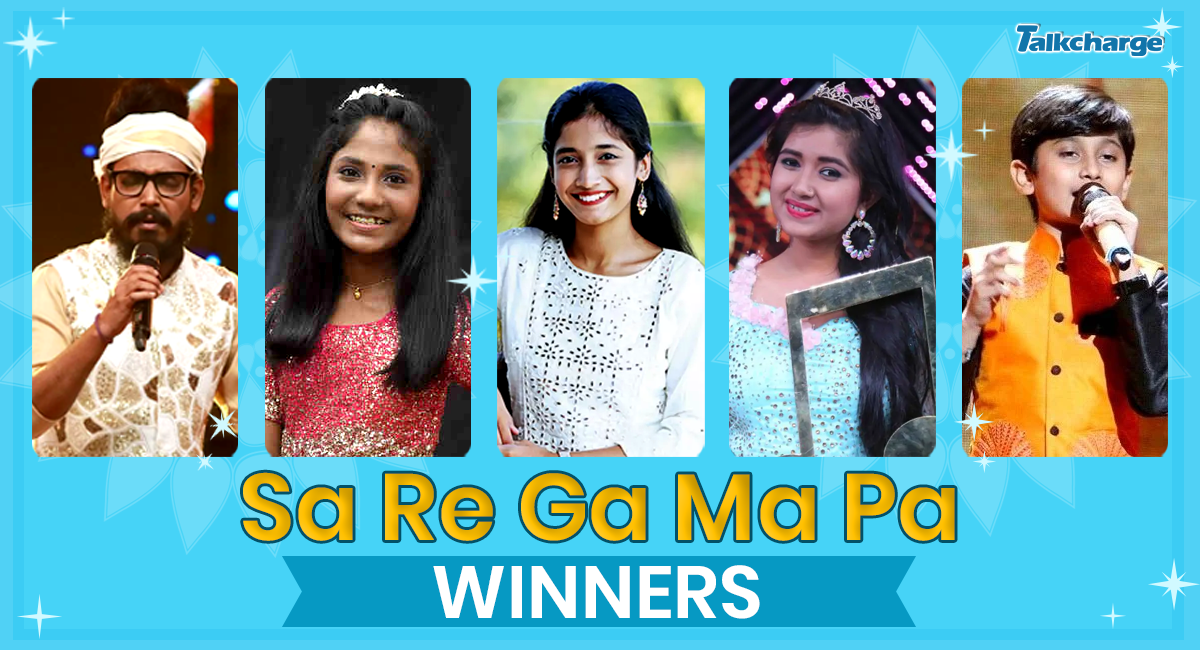 Sa Re Ga Ma Pa is one of the first and longest-running musical shows in India! The singing based show gave a platform to many budding singers to showcase their talent. The show began in 1995 with a unique format that had multiple judges. It was hosted by Sonu Nigam With till 2000. Later Amaan Ali Bangash and Ayaan Ali Bangash, presented the show for a season, followed by Shaan till 2005. Post which many known actors have hosted the show until Aditya Narayan started hosting it in 2014. Started in 1995, the show has had various variations and a huge Sa Re Ga Ma Pa winner list.

The format of the show has seen many changes that have uplifted its viewership. The show has given us some of the finest playback singers and musicians, including melodious Shreya Ghoshal and Shekhar Ravjiani. Scroll down and have a look at Sa Re Ga Ma Pa winner list.

Winning Prize: Rs 5 Lakh along with the other prizes

The latest season of the singing reality shows Sa Re Ga Ma Pa came to an end on 18th April 2021 with a mega finale. Arkadeep Mishra lifted the winner trophy. The folk singer was a consistent performer from the beginning itself. Niharika Nath was the runner up was first runner up, and Bidipta Chakraborty finished as the second runner up of the show.

Aryananda R Babu is the latest winner name in Sa Re Ga Ma Pa little champs winners list. The young girl from Kerala is known for her magical voice. She took home the winning trophy along with Rs. 5 lakh. Ranita Banerjee and Gurkirat Singh were declared as the 1st and second runner-ups.

Sa Re Ga Ma Pa Li’l Champs 2019 was won by the Nagpur girl, Sugandha Date. The young girl idolised Lata Mangeshkar and was previously amongst the top participants of Indian Idol Junior. She took the coveted trophy along Rs 5 lakh. Pritam Acharya, Astha Das, Ayush KC, Anushka Patra and Mohammad Faiz were the finalists of the season.

Winning Prize: 5 Lakh and a car

To everyone surprise, Sa Re Ga Ma Pa L’il Champs 2017 had two winners- Shreyan Bhattacharya and Anjali Gaikwad. This edition had 30 members-grand-jury, which gave grades to each participant upon their performance and the average percentage of their scores was displayed. The great grand finale of the show took place in pink city. The extra challenger Vaishnav Girish was declared the runner-up.

Winning Prize: Rs. 25 lakh along with a brand new car

The 17-year-old Kushal was Paul winner of the 25th edition of the musical reality show, Sa Re Ga Ma Pa. He belonged to a mentor, Pritam’s team! He started singing at a very early age. The finale of Zee TV Sa Re Ga Ma Pa 2016 took place in Goa. Besides Kushal Paul, the other four finalists of the show were Jugpreet Bajwa, Sachin Kumar Valmikan, Rupali Jagga and Jyotica Tangri.

The 25-year-old Yesaswi Kondepudi won the Sa Re Ga Ma Pa Season 13 – The Next Singing Icon. With his win, he made it to the list of Sa Re Ga Ma Pa winners. The young talented singer has been applauded by judges numerous times for his unique style of singing. Meanwhile, Bharat Raj was declared the first runner of the season. The 13th edition was Telegu language musical reality show. It aired on the  Zee Telugu channel.

The 10-year-old Azmat Hussain won the Zee TV Sa Re Ga Ma Pa L’il Champs trophy in 2011. In 2019, the Azmat participated in Indian Idol as well. The talented singer has struggled hard to get recognition. Salman Ali was the first runner-up in the show. Interestingly, he went on to win the 10th edition of Indian Idol.

Kamal Khan emerged as the winner of Hero Honda Sa Re Ga Ma Pa Singing Superstar after giving tough competition to the rest of the 17 contestants. Abhilasha Chellum and Bisakh Jyoti were the first and second runner ups of the show. Along with the coveted trophy,  Kamal Khan took home a Grande MK II Car and a Hero Honda ZMR Bike.

Hemant Brijwasi won Sa Re Ga Ma Pa L’il Champs in 2009. The music reality show had 12 contestants- 6 girls and 6 boys. The theme of the season was Jeetenge World, Boys Ya Girls. After winning Sa Re Ga Ma Pa L’il Champs, Hemant went on to win another singing based show, Rising Star 2, in 2018. He has sung for movies like films Soorma (2018) and Manikarnika: The Queen of Jhansi (2019).

Winning Prize: Rs. 50 lakhs with Zee TV, a Hyundai I 10 car and an LCD from Sony Bravia.

Vaishali Made was the winner of the Hero Honda Sa Re Ga Ma Pa Challenge 2009 and made it to the Sa Re Ga Ma Pa winner list. While Vaishali took the first spot in the finale, Yashita Yashpal Sharma and Somen grabbed a second and third spot, respectively. The winner of this edition took a dazzling trophy along with Rs. 50 lakhs with Zee TV, a Hyundai I 10 car and an LCD from Sony Bravia and all the 14 finalists were awarded Hero Honda Bike, tickets to Switzerland as a special gift from Max Newyork life insurance.

Winning Prize: Rs 50 lakh with Universal and Zee TV along with Chevrolet Spark

Sanchita Bhattacharya was first to grab the place in Sa Re Ga Ma Pa little champs winners list as she won the inaugural season. After winning the music reality show, she became a playback singer in the Hindi and Bengali music industry.

Assam led Debojit Saha to win the maiden title and trophy. The Sa Re Ga Ma Pa Challenge 2005 was an extension of the Sa Re Ga Ma Pa programme that started in 1995. The series featured 48 potential singers. Each mentor had their own Gharana. Every mentor selected each contestant for their Gharana. Debojit Saha belonged to Ismail’s Yalgaar Ho Gharana.

Hricha Mukherjee was the winner of Sa Re Ga Ma Pa 2002 edition. The show was telecasted on Zee TV. The music-based show had multiple judges. The show was presented by Shaan. It went on to become the most-watched show on television.

Season 6 of Sa Re Ga Ma Pa was won by non-other than Shreya Ghoshal. She is one of the finest playback singers in India. She was only 6 years old when she started her formal training in classical music. After winning the show, she crooned many Bengali Albums. She got her first big break with Bhansali’s romantic drama Devdas (2002), for which she even won Filmfare Award for Best Female Playback Singer and a Filmfare RD Burman Award for New Music Talent. After that, there was no looking back for her.

Archana Udupa was the first contestant of south Indian origin who bagged the title of  Sa Re Ga Ma Pa winner in the year 1998. Post winning the show, she went on to sing classical and devotional songs. She did give her voice for Hindi songs as well. She has also been awarded Karnataka State Film Award for Best Female Playback Singer in 2012 for her film Bhageerathi.

The 1997 edition of the singing-based show made Mohammed Vakil the first male singer to earn his place in Sa Re Ga Ma Pa winners list. Today Mohammad Vakil is a well-known musical artist. He has landed his voice in Bollywood  Blockbuster ‘Veer Zaara’ and many others. He has been trained by the Ghazal maestros- Ustad Mohammed Hussain and Ustad Ahmed Hussain.

Nobina Mirjankar won the second season of singing based reality show- Sa Re Ga Ma Pa that telecasted on Zee TV. She was the second female winner. Nobina is a versatile singer who has many melodious songs like Alwar Tuzhi Chahool, Mazya Swapnana Sath etc., to her credit.

Started in 1995, the Sa Ra Ga Ma Pa is one of the oldest and most-watched singing-based reality shows. Over the years, the show has gone through various makeovers with changes in its format. Until 2005, the show had several judges, post that each judge led their Gharana and mentored the contestants. This format was carried until 2009. There were 3-4 judges on the show that remarked on contestants based on their performance.

2. When did Shreya Ghoshal win Sa re ga ma?

3. Who is hosting the current season of Sa re ga ma?

Aditya Narayan has been hosting the show since 2014.

4. On which channel Sa Re Ga Ma Pa is telecasted?

The singing-based show started in 1995.

Dibakar Debnath was the winner of Zee Bangla Sa Re Ga Ma Pa 2015.

Sanjeevani Bhelande was the winner of the first season of Sa Re Ga Ma Pa that aired in 1995.

The latest season of Sa Re Ga Ma Pa is telecasted at 9 pm on Saturday and Sunday on Zee TV.

Aditya Narayan continues to host the 2021 edition of the musical reality show.