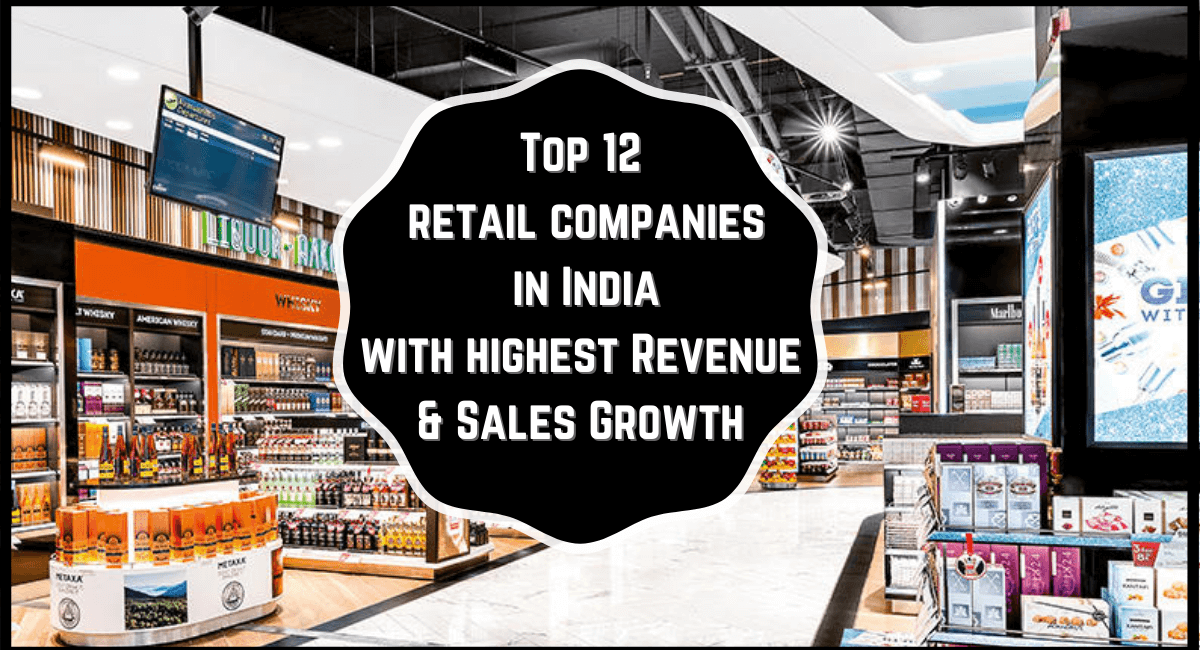 Indian retail industry is the most dynamic and fast-growing. This is because of robust demand and increasing investment. So if you are interested in knowing the best Retail Companies in India, this blog will help you.

This blog lists top-notch companies with details of their revenue and sales growth. If we are talking about the retail company, then some basic parameter to compare includes the number of retail exclusive or inclusive stores or the number of employees. So do ahead to dig deep into this subject.

Reliance Retail holds 94th position in Deloitte’s Global Powers of Retailing 2019 list. It is one of the largest retail companies in India by revenue, sales growth, and the rising number of retail stores.

Reliance Retail, founded in 2006, is a big name for retailers, network operators, and more. If you have done trendy cloth purchasing from online shopping sites, then you would have gone to the AJIO website. This platform also brings huge revenue to Reliance Retail Limited.

You can look for the store near you. India’s retail chain has grown to more than 10,000 retail stores. You can find many other retail divisions like Reliance Fresh for vegetables and fruits, Reliance Digital for electronic products, Reliance Trends for fashion and clothing, and more. Therefore, this is a major player in retail industry in India.

Future retail is in the list of retail chain stores in India that is spread across the country in more than 400 stores. It is the second-largest retail company in India with more than 1500 stores.

If you ever walked in Big Bazaar hypermarkets, you have always used this retailer. This is a store that is a major one-roof marketplace. HomeTown is also a retail division of Future retail limited group where you can get the best furniture, sofas, home décor, and many more products.

You might not know that you have already been a frequent buyer from Future retailers. Food Bazaar, Fashion at Big Bazaar (FBB), Koryo electronics and many more products can be bought from these retail divisions. All of these divisions make it among top retail companies in India.

DMart or Avenue Supermarts is among the popular retail companies in India; you can also count it among the Indian chain of hypermarkets. It was founded in 2002 and it presently has more than 170 retail stores with high revenue. That’s the reason we have placed it at third if you see the top 10 retail companies stores in India.

It is a one-roof marketplace where you can get a wide range of personal products, garments, and many more things. You can get toiletries, kitchenware, bath linen; you can find the best products in the store. Not only these, but they also have home appliances, gadgets, tools, and other related products. Avenue Supermart has market capital of 144,023 Cr. and records the sales growth of 32%. Thus it is rightly placed in the list of best retail store chain in India.

Aditya Birla Fashion & Retail Ltd (ABFRL) is one of India’s major players in the retail industry. This is also counted among the Leading Multinational Companies in India.

ABFRL has a huge retail division called Pantaloons; you might be familiar with it. You will find its outlet in big malls in Indi and across the globe. Presently, it has over 3000 retail stores spread across 800 cities. So we have included it in the list of retail stores in India.

People buy Pantaloon gift cards to present to friends and family. With the addition of trendy clothing and fashion essentials, this retail chain has accumulated huge sales growth and secured its place in top retail companies in India.

Shoppers Stop is such retail stores in India which has 86 stores in more than 40 cities in the country. Its retailing business covers a wide range of consumer products, including clothing, jewelry, accessories, footwear, and more.

It is less known that Shoppers Stop also deals with non-apparel products like cosmetics, food, books, household, gaming, and related businesses. This Indian retailer chain has been growing in the gaming segment, which holds a lot of potentials.

Shoppers Stop runs its business under three segments, including retail, property, and others making it one of the largest retail groups in India.

Trent limited is a hypermarket chain with more than 250 stores in India. This Indian retailer is in the hand of Tata Groups. There are primarily has known for Westside, Star Bazaar, Landmark, and Fashion Yatra.

Westside is one of the best retailer chains that offer fashion accessories, clothing, footwear, and other artifacts. It is ideal for men, women, and children as there are wide ranges of products. Therefore this has qualified in the list of retail companies in India.

Star Bazaar is one stop for all household products like essential kitchen staples, vegetables, fruits, health, and beauty products. It also has frozen and fresh non-vegetarian food items. Along with these, Landmark is another retail division for books and magazines. Recently, Tata’s Trent has also launched Fashion Yatra for a new format of fashion and clothing.

V-Mart Retail Limited was established in 2002 with the first store in Gujarat in 2003. It was initially named Varin Commercial Private Limited later, it was changed to V-Mart Retail limited. It is undoubtedly one of the top retail companies in India.

It was planned to operate throughout the country very systematically. They divided the country in three tiers. In tier I they covered the Northern States of India. In tier II and tier III it covered Eastern and western parts of the countries, respectively. Today there are 228 stores in 176 cities of the country. This makes it growing retail chain in India.

It has made its name as the best garment retailers in India. You will find clothing, fashion, accessories for both genders and kids. Its collection and price counted among the best retail companies in India.

If you have ever visited Croma outlet then you have been the customer of Infiniti retail limited. Infiniti is subsidiary of Tata sons with more than 170 stores in the country. As a fact, it is India’s lending exclusive electronics retailer where you can get range of products inducing kitchen appliances, home appealed, smartphones, gadgets, electronic grooming products and more.

There are multiple Croma stores along with an online store and mobile app. You can easily shop from these store and buy your favourite gadgets and appliances. Retail stores in India allow you to get all products with ease. And Croma is also counted in the list of hypermarkets in India with its electronic products.

When we are talking about top 12 retail companies in India, then The Raymond group has to be on the list. It belongs to a JK Group of companies that was founded in 1944. It is majorly a fine textile retailer chain with trusted name in shirting and suiting.

This chain has extended to grooming products under various retail divisions like Pak Avenue, Kama Sutra, Color Plus, and Kama Sutra. You will find these products in more than 700 departmental stores that employee 7000 staff. It also won’t be wrong to call it one of the oldest retail companies along with being best retail stores in India

Godrej India is popular for selling fast-moving consumer goods that it is listed in top 10 retail companies in India. Its retail brands include Godrej Nature’s Basket having food-related products, and Godrej Interior for home furnishing, consumer electronics, and office use items.

The most common brands like Ezee, Cinthol, Godrej No.1, Renew, Godrej Powder Hair Dye, etc., come under this retail company. These are popular product brands found in Indian households. You can get these from online shopping websites in India.

V2 retail focuses on value and variety. It deals with consumer durable products, textiles, garments, and accessories. With headquarter in New Delhi, the company is functioning since 2001. In the last few years, it has successfully spread its retail outlets in 17 states of the country.

There are around 77 V2 stores in India which has all its products ranging from garments to fashion accessories. You might want to visit the stores to buy these products. It is undoubtedly among the best retail companies in India.

Recently launched Future Lifestyle Fashion Limited is among top retail companies in India since 2012. It is an umbrella retail chain company with multiple domestic and international brands under many segments.

It has emerged as a top retail chain for clothing, fashion products, jewelry, footwear, furniture, and other products. It doesn’t seem just to have spent 8 years in the market yet listed among top retailers. This is one of the biggest retailers in India.

We get all that we need in one place because of the efforts of the innovative retailers in India. The top retail companies have redefined the concept of shopping and marketplace. Today, we can find food staples, clothes, footwear, vegetable, dairy, jewelry, and more under one roof. These are hypermarkets and big retailers. Here we have picked up 12 most revenue-generating retail companies in India. It includes detailed statistics of all the companies along with many other information.

1. How many retail companies are there in India?

2. Which is the largest retail sector in India?

The lifestyle and fashion sector is the largest retail sector in India.

3. What companies are in the retail industry?

Reliance, Future retail, Avenue retail is some of the well-known retail companies in India. You can go through the blog to know many such companies.

4. What is the number 1 retail store?

According to revenue, Reliance retail limited is the number 1 retail store.

5. Is Amazon a retail company?

Amazon does not have its own retail outlets; it acts as a platform provider between sellers and buyers.

6. Who is the biggest retailer in the world?

Walmart comes first when it comes to the biggest retail in the world.

7. What percent of GDP is retail?

5.5% of the GDP comes from retail trade in the country.

8. Which is the best retail business in India?

Coffee shop, Ice Cream parlor, fast food, and other are the best retail business in India.

Foreign Direct Investment in 100% retailing is not permitted under government rules.