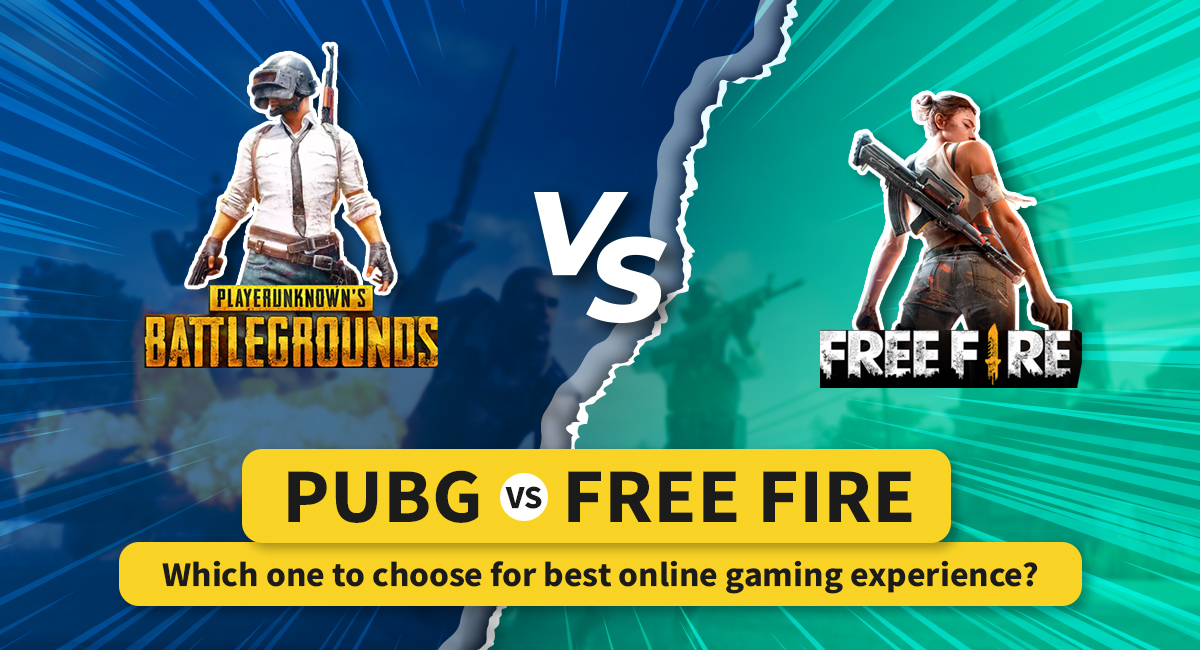 PUBG Mobile & Lite is the name that broke many records in the gaming industry from the day it was launched. With more than 100 million+ downloads, PUBG (PlayerUnknown’s Battlegrounds) became the smartphone gaming hub of gamers. It is so addictive and popular that it didn’t even require marketing. On 2nd September 2020, India banned this game because of security and health reasons, and this came as a sheer disappointment for PUBG players. Meanwhile, another game, Free Fire came into the limelight and recently set the record of 80 million daily active users across the globe where PUBG had 50 million.

With similar game setup and huge download numbers, it has become the next best resort for the battle royale and mobile shooting game experience. This game has huge potential to give neck to neck competition to PUBG. There are many similarities between the two which includes solo, duo and squad playing modes. Talking about differences, the two have distinct graphics, match duration, device compatibility and other aspects.

I have played PUBG in the past and recently downloaded Free Fire to play and see what the rant is all about. And, trust me both the games are intriguing. Go ahead and read this blog, ‘Pubg vs Free Fire’ to know which is best for the online gaming experience with an unbiased opinion.

Firstly, let’s get our facts right! Go through the table below to get the bigger picture.

PUBG vs Free Fire which is Best?

The above two points tell us about the popularity of both Free Fire and PUBG game. We can see that the competition is not one-sided instead, Free Fire is giving significant competition to PUBG. Here we have created different comparison criteria to bring the positives and negatives of both the crazy games to limelight.

PUBG graphics can be adjusted according to the mobile specification. If you are using a low-end device with low CPU and GPU, you can play the game in low graphics and not use high graphics. If you are using high-end device then you can play very comfortably using high graphics. PUBG graphics looks very real, and it enhances the gaming experience. You can experience amazing landscapes through maps, sky full of stars in night mode, long stretch of desert rain and fog, and more.

2. Battle Royale for Both the Games

Most interesting and exciting part of both these games is the battle royale segment where unknown players come on the same platform to fight the battle of survival in real-time. There are total of 100 players in PUBG while Free Fire allows you to play the battle game with 50 players only.

Both the games have shrinking zones and players have to save themselves and kill others. There are scavenging element and exploration availability as well.

There are three maps in Free Fire namely, Bermuda, Purgatory, and Kalahari. Whereas PUBG has multiple maps that transports you to different continents and islands for an adventurous gameplay experience. These include Erangel (Default Map), desert locations of Miramar, snowy Vikendi, rainy Sanhok, and more locations like Pochinki and military camp that are deadly hubs for real shooters.

What fun is it to get ‘Winner Winner Chicken Dinner’ in PUBG or ‘Booyah’ in Free Fire if you got it easy way? Isn’t it more exciting to fight bravely with the enemies in tough locations and taking risks in looting airdrop! The adventure of a game comes with scavenging elements in it.

Talking about vehicles, PUBG has jeep, truck, van, Jet Ski, buggy, motorcycle, and even helicopter. On the other hand, Free Fire has vehicles like truck, sports car, motorcycle, tuk-tuk, tempu, amphibious motorcycle and more.  So you can experience a range of vehicles in both games. However, when it comes to airdrops, Free Fire has less loot options as compared to PUBG.

The main attraction of a shooting game is the range of guns and weapons, and how realistic it feels while using it. PUBG has Groza, M416, AWM, AKM, M24, Mk14 EBR, and other top-notch guns. And Free Fire has guns like RGS50, Gatling 1200, Katana, MGL140, P90 50, and many others. So you will majorly get all types of rifles, shotguns, and pistols in both the gaming apps. If you have played PUBG, you know how important is 8X scope, but you can get only up to 4X scope in Free Fire. Along with these, the recoiling effect is not seen in Free Fire that lacks to give the real shooting effect.

On average, one match of PUBG goes up to 40-45 minutes if you reach till the end. Meanwhile, you can play two games on Free Fire as one match takes around 10-20 minutes. As we discussed earlier, the maps of Free Fire are smaller and only 50 players can take part in it. Sometimes the game ends even before the safe zone shrinks three times.

What are the Similarities Between These Games?

There are quite a few similarities between Free Fire- New Beginning and PlayerUnknown’s Battlegrounds that are listed below:

When is PUBG Mobile coming back in India?

PUBG was banned in India because it is addictive in nature, drastically shooting up screen time and normalizing violence. The PUBG Corporation has taken many steps to minimize these issues to please the Indian Government to unban the game in India. Talking about its comeback it might be available in India after March 2021. Meanwhile you can enjoy other free online games as well.

Even though people say that PUBG is superior to Free Fire yet if we see the facts, the number of downloads and ratings show a different story. So here we have written ‘PUBG vs FreeFire’ blog to sketch the differences between the two.

On one side, we have seen that PUBG is unbeatable when it comes to graphics, weapons, and real-like gaming experience. However, it highly consumes mobile battery and requires huge memory and better processer. Also, updates require lots of memory space. But these issues can be addressed to a certain extent if you start using PUBG Lite.

On the other hand, Free Fire occupies lesser mobile memory space, and it works well if you just want to engage yourself in exciting gameplay without expecting for a real life game experience. Both have their pros and cons so you can choose whatever you like. Honestly speaking! Free Fire did not appeal to me for the second match after enjoying PUBG.

I don’t think so! Because enthusiastic gamers would not like to play a game that looks animated.

2. What is the difference between Free Fire and PUBG?

There are many differences between these two games, even though the game format and setup are same. Go through the blog above to know more.

3. Free Fire is which country’s app?

It is published by Gerena, which is registered in Singapore.

As a fact, these two were released six months apart. The beta version of Free Fire was launched on 30th September 2017 and PUBG was launched in March 2018.

PUBG was awarded as Best Game of 2018 available on Google Play. And it is still counted in top 5 games in the world.

6. Is PUBG banned in India?

Yes, PUBG is banned in India, and there is a possibility that it will be unbanned soon.

No, Free Fire is not a Chinese game as Garena is a Singaporean company. The founder is originally from China, but now he is a citizen of Singapore.

PalyerUnknown’s Battlegrounds is abbreviated to PUBG. There is an interesting story behind the name of this game. The creator of this game Brenden Greene was an enthusiastic gamer and his username used to be ‘Player Unknown’.