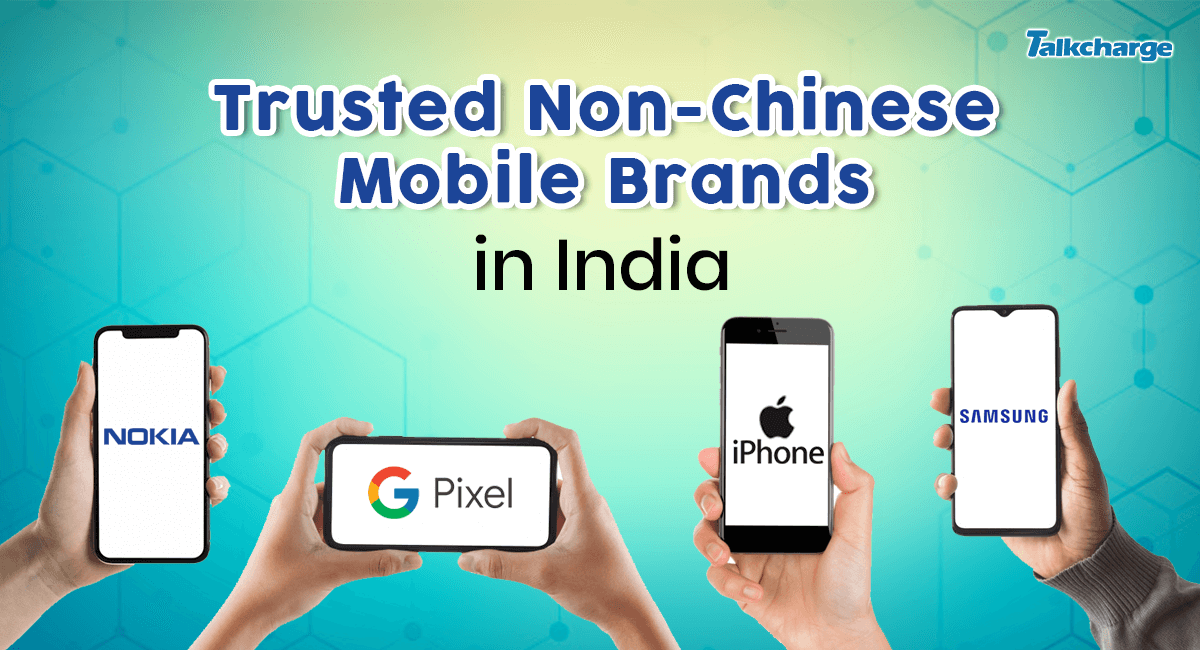 China has ruled the mobile phone industry for the longest with its affordable smartphones, packed with innovative features. However, India’s tension with China has now affected the trade drastically! Most the people now prefer to buy smartphones from Non-Chinese mobile brands. Luckily India is home to many smartphones manufacturing brands that are not Chinese. Also, we have many Indian mobile phone brands that are as good as many existing international companies and offer decent features too! Let’s look at some of the non-Chinese mobile brands in India 2022.

List of Non-Chinese Mobile Brands and Companies in India 2022

The South Korean multinational conglomerate Samsung is located in Samsung Town, Seoul, from where it took its name. The company introduced several Smartphones in 2007 and gave tough competition to Apple. In 2010, this non-Chinese mobile company came up with Galaxy S series, which boosted the company.

With the number of smartphones produced yearly, the brand became the largest mobile phone manufacturer globally in 2012. Today Samsung manufactures the best Android-based devices. It was also the first company to launch affordable smartphone handsets in the country.

Apple is an American multinational Technology company. The brand has carved its niche in the electronics sector as well. Talking about the first iPhone, the brand launched its first phone in 2007 with features like a 2-megapixel camera, 3.5-inch diagonal screen and 320X480 pixels at 163 PPI. The model wasn’t successful because of the exuberant cost. In the subsequent year, the brand introduced iPhone 3G with additional features.

In the later years, Apple came up with iPhone 3GS and iPhone 4 in 16, 32, and 64 GB versions. Though iPhone smartphones are expensive when it comes to their key features, there is no Chinese mobile brand that could compete with them. Owing to this, Apple is one of India’s most famous non-Chinese mobile companies.

The latest model to be added to the Apple phone list is the iPhone 12 Pro/Pro Max. Apple has recently started the assembly of the iPhone 12 in India. The parts of this model would be manufactured by Foxconn in Taiwan and assembled in Tamil Nadu.

Next in our list of non-Chinese mobile brands in India is Google. Headquartered in the United States, Google has introduced its series of Google Pixel Mobiles that are packed with the best features. The first Google smartphone came in the year 2013. Google Pixel phones have all the Google apps with the best of the cameras that can give you studio-like photos on the go. Its advanced features like Google Assistant helps you send voice messages and control your apps. The brand is giving tough competition to all the Chinese mobile brands and is positioned at the top of the list of non chinese smartphone brands in India.

Yes, Nokia is one of the popular non-Chinese mobile companies. Its headquarters are in Finland. Nokia’s first portable mobile phone- the Mobira Cityman 900- came in 1987. It was the first company to develop the first GSM network. In 1998, Nokia took the mobile industry by storm, releasing 100 million mobile phones for its users.

One of the prime reasons why Nokia became one of the most trusted non-Chinese mobile brands in the ’90s was its range of mobile phones that catered youth. In late 1996, the brand came up with an innovative camera phone. In the subsequent years, Nokia introduced models like Nokia N95 that became super hit. Nokia is also known for its durable phones. In the last couple of years, the brand has revolutionized itself. From Windows smartphone to Android phone; the brand has it all!

Lava is one of the best Indian mobile brands. The homegrown company was founded in the year 2009 and has operations in other countries like Nepal, Thailand, Indonesia, Sri Lanka, Russia, and Middle East Pakistan. Lava International introduced its flagship smartphone – Iris Pro 30, and The Lava Iris X1 was one of India’s first smartphones with Android Kitkat 4.4 as an operating system.

It is another most preferred Chinese smartphones brands with some of the best mobile phones like Z6, Lava Z1, Lava Z2, Lava Z4. All these smartphones are priced under Rs. 1000, which makes them quite affordable.

Talking about Indian brands of smartphones, how can we miss Micromax? Founded in 2000, the company is primarily known for its smartphones, home appliances, and consumer electronics. With its feature-oriented smartphones, it has become one of the world’s largest mobile players.

Micromax has so far introduced many budget-friendly handsets with innovative features. It was also the first company to launch X1i -the first smartphone with long battery life. In late 2000, Micromax gave tough competition to many Chinese companies, and in 2014, it became the best non-Chinese mobile phone brand in India 2022.

Asus is also one of the most trusted Non-Chinese smartphone brands in India. It is a Taiwanese multinational brand known for computer- phone hardware and electronics. In the 2000s, the company collaborated with Intel to launch Android-based smartphones, including the ZenFone series.

How can we miss Sony in our list of best non-Chinese mobile brands in India? This Japanese multinational conglomerate has been catering to the Indian market since late 2000. In 2001 the brand partnered with Ericsson, and they jointly became Sony Ericsson Mobile Communications. The brand launched a series of multimedia-oriented mobile phones with a camera, a prominent feature back then. After strong competition from Apple from the late 2000s in 2009, the brand was listed at 4th position in the list of the largest mobile phone manufacturers across the globe.

Owing to the stiff between India and China, people are now routing toward non-Chinese mobile brands. Samsung, Apple, Lava, Micromax Informatics, Google, and Nokia are, to name a few, perfect alternatives to Chinese smartphone brands. These companies have the best mobile phones that fit everyone’s budget, and not to forget, these are packed with innovative features too.

1. Which is the best non-Chinese smartphone brand?

Initially, it had a production unit in China, but it soon moved to India because of high labor costs.

3. Is Motorola a non-Chinese Company?

Motorola is an American company and subsidiary of the Chinese brand Lenovo.

No, it closed its operations in India in the year 2018.

5. Does LG sell its smartphones in India?

The smartphones from this South Korean brand are available in India. However, the company has recently announced that it will soon shut its smartphone division in India.

There are many non-chinese mobile companies in India. Some of the phone brands which are not Chinese are Nokia, Samsung, LG, and Sony.