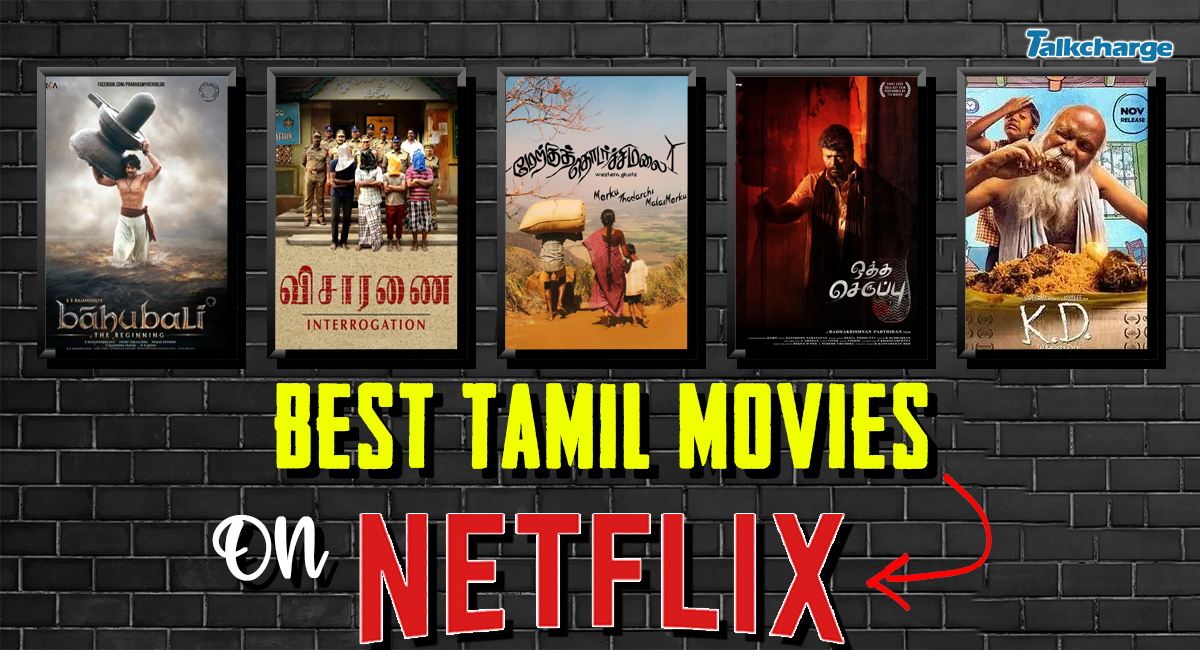 In the last couple of years, Netflix has become one of the go-to OTT platforms as it has a wide collection of movies, web series and other content in multiple languages. Talking about different languages, the OTT platform has a massive collection of Tamil movies and their dubbed version. In order to watch your favourite Tamil movies on Netflix, all you would have to do is buy a subscription to the OTT platform. There are four types of subscription plans that are mobile, basic, standard and premium. You can choose the best that fits your bill and watch Tamil movies on Netflix at your convenience.

List of Best Tamil Movies on Netflix to Watch

Both The Baahubali: The Beginning and Baahubali: The Conclusion went on to break many box office records in their respective release year. Both the parts of Baahubali remain to be one of its kind movies that were simultaneously made in multiple languages, including Hindi, Tamil and Telugu. The first part of the movie left the audience with the question of why did Katappa kill Baahubali. They got the answer with the second part. Both the movies received many accolades and went on to become the highest-grossing Indian movies of 2015 and 2017 respectively. In case you have missed this epic Tamil movie, you can watch it on Netflix India.

Visaranai is a crime thriller that is inspired by the well-known novel Lock Up by M. Chandrakuma. The movie is about four labourers tortured to death for a robbery that they haven’t committed. It is one of the best Tamil movies on Netflix do watch it!

This Tamil language drama film is about the lives of landless workers who live around the foothills of the Western Ghats in India. The movie beautifully showcases how commercialisation has created a conflict in the lives of the labours.  It clearly gives a message of how development has also led to destruction in the way of life.

The thriller revolves around a man with an emotionally unstable personality disorder. He is suspected by police in a murder case. The movie has made its name to Asia Book of Records and India Book of Records as this is one of its kinds of film that is directed, produced, written and starred by a single person – R. Parthiepan. The movie is currently streaming on Netflix.

It is a poignant movie that revolves around- Karuppu Durai, 80 years old man and Kutty 8 years old kid. Karuppu Durai who was in a coma for a couple of months wakes up after listening to his family’s plan to kill him.

He leaves his home and meets the young kid who is full of life. The two bond well and soon become support systems for each other. Soon Kutti gets admission to a school, for which he has to leave  Karuppu Durai. Durai was reluctant at first on sending Kutty away from him but sends him for his betterment. He returns to his home, hands over the property document to his sons, and leaves the house again in order to explore a new life.

Netflix Tamil movies list also has recently released Mandela. Set in the backdrop of a village panchayat election where the local barber’s vote determines the election result. The movie was released via Star Vijay and was globally released through Netflix. The film captures the best performance of the Yogi Babu. In addition to his performance, mesmerising visuals, soothing music, sensible cuts and engaging narration will keep you hooked till the end of the movie.

This Tamil-language movie features multiple stories of people from different walks of life. The first story revolves around a corrupt officer who had a failed marriage. The second explores the life of a transgender person, Shilpa, who is married and has a son but cannot live with them due to social norms that restrict transgender from living with their family.

The film features four unique stories through which it explores how honour, pride and sin influence relationships. The anthology has an ensemble cast including Kalidas Jayaram, Shantanu, Bhavani Sre, Padam Kumar, Simran, Gautham Menon, Sai Pallavi. The movie was released on Netflix on 18th December 2020.

This soothing movie will leave you emotional. Do watch this one of the best Tamil movies on Netflix.

Next on our list of best Tamil movies on Netflix is Mersal, which stars Vijay, one of the richest South Indian actors in the lead. The story is about two brothers, Vetri and Maarib.  One is a magician, and the other is a reputed doctor. Both the brothers later joins the hand to avenge their father’s murderer.  The film was a commercial success and went on to become the fifth-highest grossing South Indian movie in 2017. Both the roles are played by Vijay itself. The intriguing story and action-packed scenes of this movie will surely keep you glued to the screen.

This thriller features three men- a doctor, a blind man and a coach in Chennai who are connected with each other due to the sinister taking place in their lives. The movie was directly released on Netflix and received positive reviews. The narration of this supernatural movie will keep you glued till the end. Do watch this Tamil movie on Netflix!

Silly Karupatti is an anthology of four different love stories. Through these four stories, the director tries to showcase what love means in different stages of life. The movie is nicely crafted with soothing performances, aesthetic visuals and emotive music that complement the screenplay. Silly Karupatti was commercially successful. If you have missed the movie on you can watch this Tamil movie on Netflix.

If you are a Rajinikanth fan, then you cannot miss his 2019 release Petta. Along with its original version, the movie was also dubbed in Telugu and Hindi. The film revolves around a hostel warden –Kaali (played by Rajinikanth ), who becomes the target of a dreaded politician, but he does not let them succeed in their antics.

From comedy to action, the movie has all the elements that make it one of the must-watch Tamil movies on Netflix. Right from Rajini’s opening line, “Naan veezhven endru ninaithaayo”, Petta has several dialogues that make it clear for everyone that Rajinikanth is a Superstar for a reason!

Kannum Kannum Kollaiyadithaal is a romantic heist comedy that revolves around two con artists- Siddharth and Kaliswaran Moorthy. They both fall in love and then plans to leave their job and lead a reputed life. However, their destiny has other plans for them. The movie was released along with its Telugu dubbed version and was a hit on the Box Office. This is indeed one of the best Tamil movies available on Netflix.

Pa Paandiis a classy Tamil movie that concentrates on the life of Pa Paandi (played by Rajkiran), a retired stunt master who travels to Hyderabad to meet his old love of life. The movie is directed and produced by the famous Indian actor and director Dhanush. Owing to its success, the film was also remade in Kannada as Ambi Ning Vayassaytho. You can currently watch the movie on Netflix.

This psychological thriller was shot in Tamil, Telugu and Hindi. The story concentrates on the life of a woman, Swapna (played by Taapsee Pannu), who is suffering from PTSD and the ordeals faced by her in order to protect her home from mysterious intruders.

She is a game designer who has been brutely raped a year before on new year’s eve. This is one of the reasons why she has a fear of the dark. Adding to it, she is been haunted by the soul of a young girl who too was brutally killed. She wants Swapna to take revenge for her murder. While it may sound like a typical story but the cinematography of the movie is quite pleasing. Do watch this movie on Netflix!

Tamil cinema is gaining its prominence on many OTT platforms like Netflix. Owing to the lockdown, due to pandemics, many Tamil movies were directly released on Netflix. In case you have missed any of your favourite Tamil movies, do subscribe to Netflix and enjoy the film in the comfort of your home.

1. Can I watch Tamil movies on Netflix?

Netflix has a huge collection of the best Tamil movies that you can watch on taking a Netflix subscription.

2. What are the best Tamil movies on Netflix?

Some of the best Tamil movies on Netflix are Merku Thodarchi Malai, Visaranai, Super Deluxe etc.

3. Is the Master Tamil movie available on Netflix?

Netflix has recently bought the streaming rights of the movie Master.

4. Does Netflix has Tamil dubbed movies?

Yes, you can also watch Tamil dubbed movies on Netflix.