All Posts / Pets and Animals / Most Dangerous Dog Breeds in the World: Breeding History & Biting Force 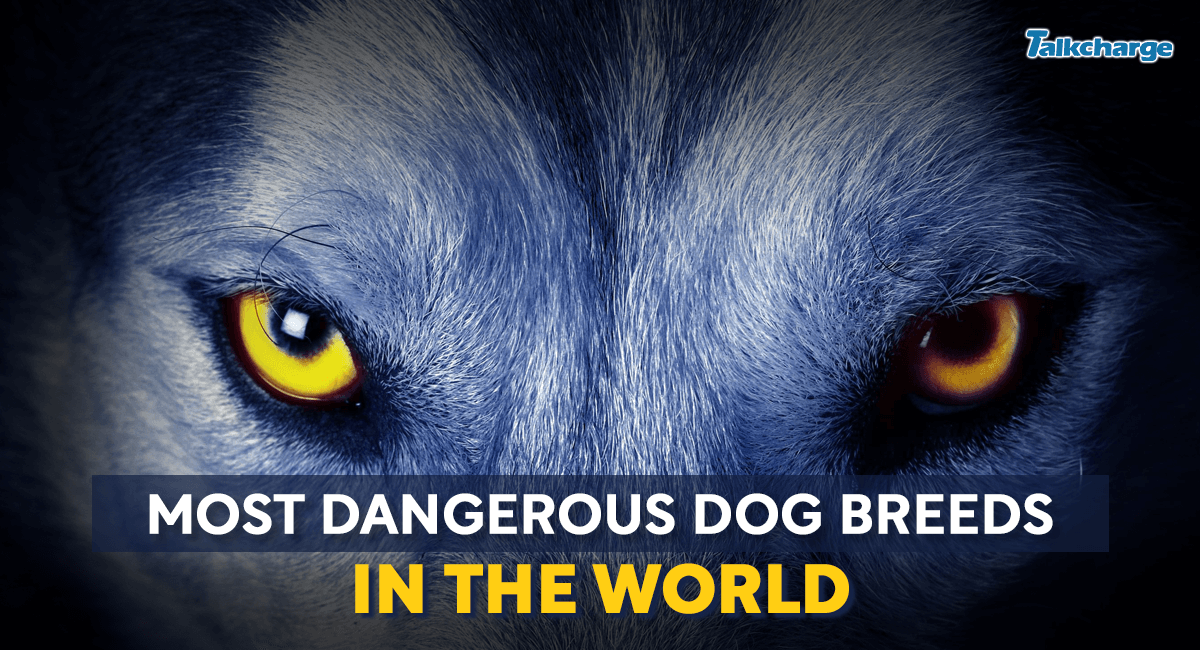 It is a well-known fact that dogs are descended from wolves. Thus, they ought to be fierce and dangerous. The temperament of the dog also depends on its training and socialization it has received. If their master socializes them well at an early age, then there could be no other animal as loyal as them. However, if they are not trained well, they could turn into a dangerous animal and can misbehave with anyone around. Having said that, some dogs are naturally aggressive, and some are taught to be. The fierceness of the dog can be comprehended by its bite strength. Bigger dogs generally have big bite-size that could lead to a fatal condition. Here we have listed the top most dangerous dog breeds that are at times no less than a monster.

What is a Dog’s Bite Force?

Before discussing the most dangerous dogs, let’s know what bite force is. Bite strength, also known as bite force, is measured in PSI which is Pounds Per Square Inch. It is the amount of pressure that a dog applies. The larger is the size of the dog, the bigger would be it’s bite-size. Let’s have a look at some of the fiercest dogs that have the highest bite strength.

List of Most Dangerous Dog Breeds in the World

Touted as dangerous dog breeds in the world, The Caucasian Shepherd Dog was originally used as the livestock guardian. Its colossal size is another reason why most people fear from this breed.

This fearless breed takes a long time to learn and socialize, and if they are left untamed, they can be aggressive and a threat to life for an unknown human or animal. To your surprise, this canine is counted amongst the ancient Molosser breeds.

Known as Sheepdogs, Kangal lives with the flock of sheep to protects them from predators. They were originally used to guard against bears, wolves, jackals in Turkey. Owing to its jaws that resemble a monster, the breed is often considered the most dangerous dog breeds in the world. Adding to it, his unpredictable temperament makes him one of the aggressive dogs in the canine family. This Turkish dog is defensive and loyal to its family. Raising this breed could be challenging, and if not trained well, they can misbehave and bite anyone in the family.

This Japanese breed of dog is fearless and is specially developed as a fighting dog. Thus they are ought to be aggressive. They are bold and courageous, and extremely dominant. Thanks to their vast body structure, Tosa Inu is also known as Sumo of the canines’ world. It is pretty challenging to train them, and if not socialize early, they could be a threat to anyone around them.

Considered as most aggressive breeds of dogs, Dogo Argentino was developed for big-hunting games like wild boar, Antonio Nores Martínez and The Breeder. Owing to its fearful traits, it is banned in 10 countries, including Australia, New Zealand, Portugal, and the UK. This breed is generally trained for police assistance, military work and guide for blinds. Dogos are social, and if socialized  in early age, they can be generous with their family members.

As this dog’s name suggests, it is a hybrid between a domestic dog and a wolf. Owing to this, it is a huge challenge to train and socialize them, so it is a more dangerous dog breed than any other. Also, this breed possesses unpredictable physical characteristics. Since they hold characteristics of wolfs thus, they are regarded as fierce breeds in the world.

Akita Inu has a strong and striking physique which makes it one of the dangerous dogs. Although they are kind, generous, and loyal to their masters, they can be stubborn at times. They have a territorial personality; this breed can slam its scissor-like jaws to protect their family and master.

Known to be the most dangerous dog in the world, Rottweiler are short-tempered, powerful dogs and counted amongst the biggest dog breeds. They were initially bred for pulling carts and as guard dogs at the farmhouse. Rottweiler is agile and has high endurance. In many countries, they are used in rescue missions by the military and police.

They possess instincts to protect their families. It is important to channelize their protectiveness and power by giving them early socialization and firm training. Otherwise, Rotties can turn into dangerous bullies.

This is a medium-sized sledge-dog and is categorized as a working Group. As the name says, they were originated in Siberia. Siberian Husky can survive in the lowest temperature, i.e-60 degrees F (-51 degrees C).

It is one of the most aggressive dogs in the world. Siberian Husky has medium-size and great endurance. It was initially bred for pulling light loads. When agitated, they can cause serious injury to people, kids and other dogs. However, if trained properly, they are the most affectionate and well-natured breed.

American Bulldog is amongst the top 10 dangerous dogs in the world. This breed has the strongest bite force, which measures 305 PSI, owing to its jaw strength. This breed of dogs is powerful and strong. Plus, these are perfect to pet at home as they can easily adapt to any environment easily. While American Bulldog can be very loving at home but could be dangerous for strangers. Also, they need to exercise regularly. Otherwise, they can turn destructive. At times when they feel threatened, they won’t hesitate to confront the attacker.

Counted as most aggressive dog breed in the world, Doberman Pinscher is a German breed. Doberman has an enormous body and is considered intelligent. They are used by the police and are good guard dogs. This breed is protective and strong. If trained well, they can get along with children and other dogs. They are the most ferocious dogs, and the credit goes to their strong bite is approximately 305 PSI.

German Shepherd has protective nature; this is an ideal dog breed for home. They are most popular, friendly and intelligent. German Shepherd is easy to train and extremely calm. However, they can be aggressive when introduced to an unknown person or animal. This breed is carried by the police and military force. They have a pretty strong bite force that measures 238 PSI; it is enough to break the bones of a human or animal.

American Pit Bull Terrier is one of the dangerous dog breeds in the world. This medium-sized dog has a well-defined muscle structure. The breed is known for its confidence, strength and zest of life. APBTs are excellent family companions. If not socialized or appropriately trained, they could be highly aggressive.

They initially helped to guide livestock and keep a watch over the predators. Because of its aggressive temperament, American Pit Bull Terrier is banned in the United Kingdom, Ontario and many others cities in the United States.

If you are planning to own a dog, then make sure the breed is not banned in your country. While it’s easy to adopt a dog, but it is quite challenging to socialize them. And if you ready to take upon the responsibility, then only think of getting a pet home. In this blog, we have shared few dangerous breeds of dogs that require extra love and socialization to turn them into socialized canny.

1. Which is the most dangerous dog in the world?

2. Which dog kills the most humans?

Pit Bull is responsible for most fatal attacks on human.

3. What dog breed has the hardest bite?

4. What are signs of aggression in dogs?

Stiff body posture, baring teeth and bites of different intensity are few signs of aggression in a dog.

5. What dogs are naturally aggressive?

Akita, Doberman pinschers and German shepherd are known to be natural aggressive breeds of dog.

There is no scientific reason that proved black dogs are more aggressive as compared to other dogs.