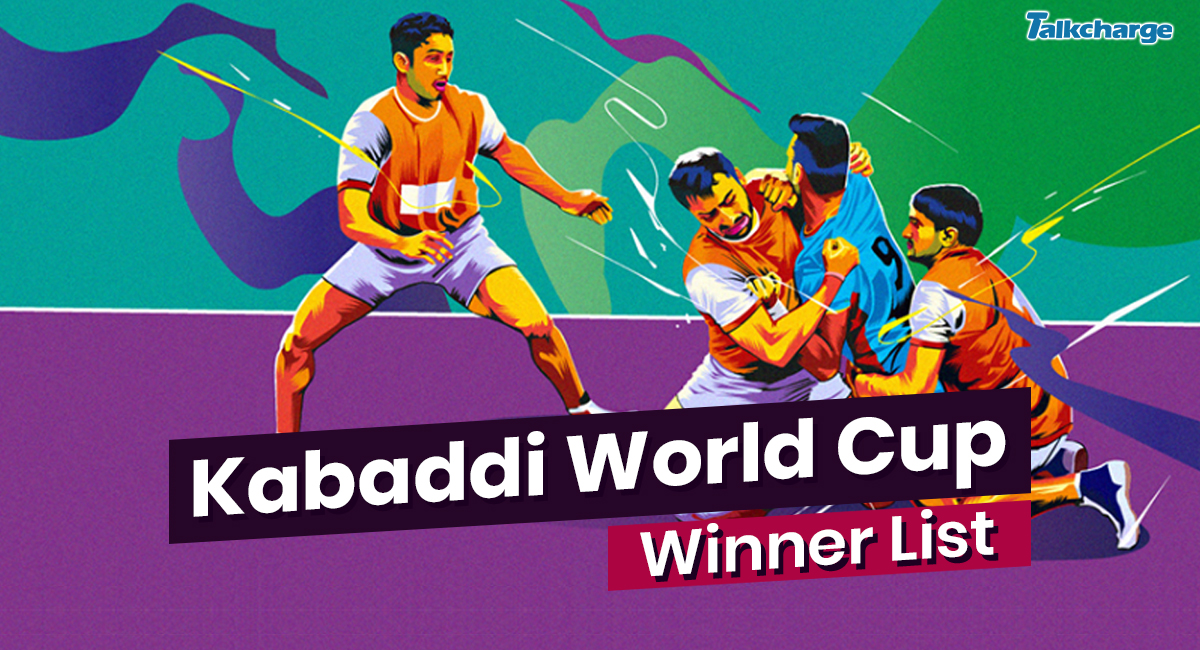 Unlike many other sports, Kabaddi is a home-grown sport that has now gained popularity across the globe. According to many legends, Kabaddi was discovered in the Vedic period of ancient India. However, the modern Kabaddi is way different from what it was being played in the olden era. The game got its due in Indian Olympic Games in the year 1938, followed by All-India Kabaddi Federation in 1950. Subsequently, Kabaddi was played as the demonstration sport at the inaugural 1951 Asian Games in the capital city.

Post-1982 Asian Games, the sport was added to the Asian Games programme. However, it was Kabaddi World Cup that got Kabaddi much fame. In 2004, the first Kabaddi World cup was organised, and India emerged victorious.

India maintained its first position in the Kabaddi world cup winners list in the year 2016 as well by scoring 38–29 in the championship game. The third standard-style Kabaddi World Cup was contested in Ahmedabad, India. Twelve teams- Australia, Bangladesh, England, India, Iran, Japan, Kenya, Poland, South Korea, Thailand, Argentina and the United States participated in this international kabaddi tournament. Initially, Pakistan was also one of the participating teams. However, it was removed owing to tension between Pakistan and India.

How to play Standard Style Kabaddi?

In this game, two teams, each with seven men members, occupy opposite halves of the field of 33 ft × 43 ft. Female members occupy 26 ft × 39 ft. Both the teams have three supplementary players. The game is played for 20 minutes and 5 minutes halftime after the 10 minutes from when the game started. After halftime, both the teams change their sides. During the game, one player from the attacking team, Raider, runs into the other team’s side and tries to tag as many players as possible. In order to get points, the Raider has to cross the baulk line in the opposite team’s territory and return without getting tackled by other team members. If any player from the opponent team steps out of the bounds, they also considered as out. While doing so, the Raider has to chant kabaddi continuously”.

On each raid, a 30-second shock is also enforced. The team gets a score when it’s player tags players from the opponent team. He would also be eligible to score if he steps into the area past the bonus line of the territory.

However, if the opponent team can stop the Raider, they will get the point. Only a single player can be revived from all the players that have been tagged. If the Raider’s team is unable to score the points, it would be referred “empty raid”. On the other hand, if the Raider can score three or more points, it is referred to as ‘Super Raid’. And, if the single Raider is able to tag all seven players in, it is considered to be ‘All Out’. The Raider’s team get two bonus points, and all 7 players are revived.

Governed by the Government of Punjab, India, The Circle Style Kabaddi World Cup is one of the international Kabaddi competitions. The first circle style tournament was played in the year 2010. Since then, it has been contested every year except in 2015, since the competition was cancelled owing to the 2015 Guru Granth Sahib Desecration controversy. Following Men’s world cup circles styles, the women’s tournament was started in the year 2012. Since 2010 all the tournaments have been won by India except the 2020 edition as Pakistan won it.

The first edition of Men’s Circle Style Kabaddi World Cup was a historic moment for the country, as India became the first champion and entered their name in the Kabaddi world cup winner list. With a 55-27 scoreline, India defeated Iran in the final match. The tournament was held in Punjab, India.

The competition had nine teams –Australia, India, Canada, Iran, Italy, Pakistan, Spain, United Kingdom and the United States. The tournament features 20 matches. The winning team was awarded ₹ one crore along with the trophy. The runner-up team took home took ₹51 lakh, and the third-place winners, i.e. Canada was given ₹21 lakh.

Winning Price: ₹ one crore along with the trophy

India created a history for winning the Men’s Kabaddi World Cup for 5th consecutive year. The team defeated their arch-rivals, Pakistan, by 45–42 and reprised their dominating performance in the 2014 Kabaddi World Cup. Like former tournaments, this championship was too contested in Punjab. 11 teams participated – Argentina, Australia, Canada, Denmark, England, India, Iran, Pakistan, Spain, Sweden and the United States in a 12-day-long event.

With their brilliant performance in the 6th edition, India defeated England by 62-20 in the Kabaddi World Cup 2016 and claimed the title under the new format. The tournament took place in various cities of Punjab, and 12 nations- Argentina, Australia, Canada, England, India, Iran, Kenya,  Sierra Leone, Sri Lanka,  Sweden and Tanzania participated in the tournament.

For the first time in the history of the Kabaddi World Cup, the Pakistan team rose as champions and marked their entry in the Kabaddi World Cup winners list in 2020. The team knocked out India in the final with 43–41 and clinched the title in their home country. Pakistan was crowned with a mesmerising winners trophy along with Rs. 10 million as the prize amount. The runner–up team received Rs7. 5 million. The eight day-long event saw participation from 9 nations that are Pakistan, Canada, England, India,  Iran,  Sierra Leone,  Australia,  Azerbaijan and Germany.

How to Play Circle Style Kabaddi?

The circle style of Kabaddi is played on a circular pitch that has a diameter of 22 meters. The inner-circle features a line that runs through the middle of the pitch, known as Saudi da bharha. In this Kabaddi style, there are two teams. Each team has eight players. It comprises one on one raid, and no player is supposed to leave the field.

If two stoppers attack the player, it is considered to be a foul. Unlike the Standard style of Kabaddi, this style does not demand the Raider to chant Kabaddi while he is on the raid. The game lasts for 40 minutes, and after 20 minutes, teams are supposed to change the sides. If the opponent team’s player is out, he does not leave the court, but the Raider’s team get 1 point for touching him. The game is played on a time basis, which is 30 seconds.

Kabaddi is no more restricted to Rural India; it has become an international sport with its entry into the Olympics and Asian Games. Majorly there are two types of Kabaddi. One is standard, and another circular both have slightly different formats. However,  one thing that is common between both styles is that India has majorly won both titles. After successful Kabaddi World Cups, International Kabaddi Federation (IKF) is preparing for Kabaddi World Cup 2021 that would be contested ideally in India. Let us hope India would reprise its dominating performance in the upcoming tournament. Wishing Team India all the best!

1. Who has won most of the World Cup title for kabaddi?

India has won most of the Kabaddi World Cup tournaments in standard and circle style.

In 2020 team Pakistan won the tournament by defeating team India in the finale.

3. How many Kabaddi World Cups India has won?

4. When was the last Kabaddi World Cup held?

The last Kabaddi World Cup (circle style) was held in the year 2020 in Punjab, India.