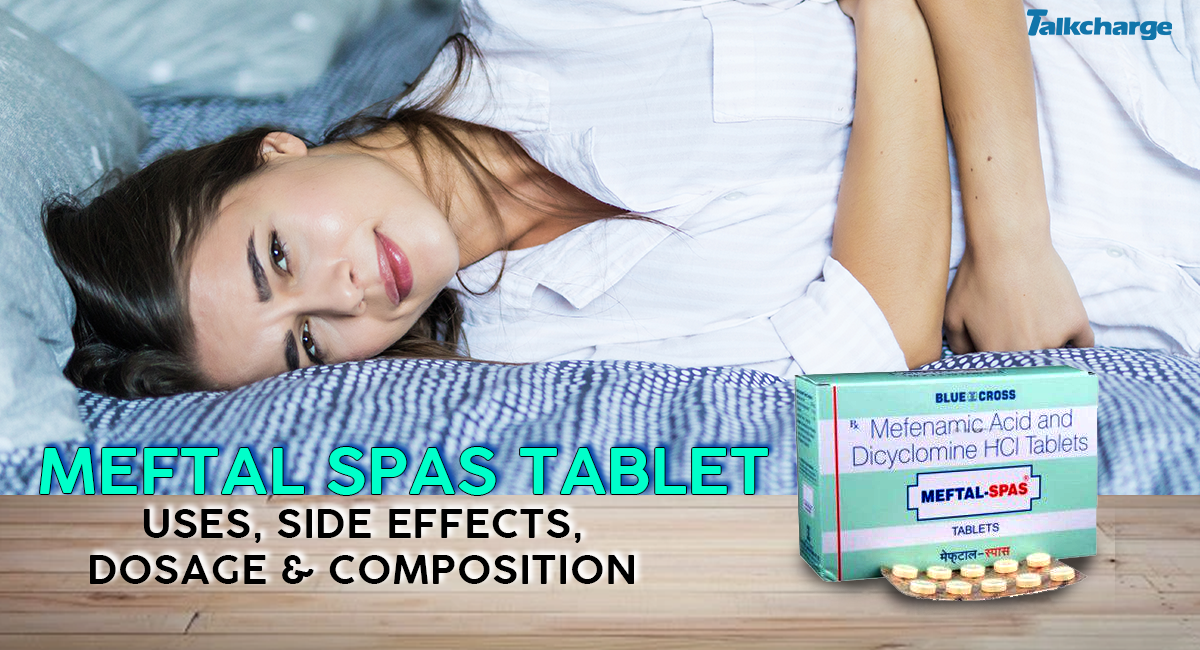 Meftal Spas, we all have heard this name! Haven’t we? It is the same medicine that most of us reach out to every month when we have menstruation cramps. It also comes in handy in treating other pains as well. Like everything taken in excess has its cons, this too has! So it is good to show up to your doctor if the pain is severe. Scroll down to know in detail about Meftal Spas Tablet uses side effects, dosage, and composition.

What are Menstrual Cramps?

There would be hardly any woman/girl who does know what menstrual cramps or period cramps are! They are a nightmare for most women. While some are lucky to have mild menstrual cramps, some have severe/unbearable pain. The pain usually begins one or two days before the period (menstruation) and may linger till the second or third day of the period. The pain ranges from mild to severe in the lower abdomen, back, and thighs. It is often accompanied by nausea, vomiting, fatigue, and diarrhea.

Each woman experiences period cramps in a different way!  Fortunately or unfortunately, it takes place every month. At times it may occur two times in months even! Menstrual cramps can be referred as primary or secondary. Primary period pains, known to be Primary dysmenorrhea in medical terms, are ones that occur due to the periods. Secondary menstrual pain or Secondary dysmenorrhea is generally caused due to infection in the female reproductive organs. It can be quite severe and linger for longer!

According to Mayo Clinic -During the menstrual period, the uterus contracts to help expel its lining. Hormone like substances (prostaglandins) involved in pain and inflammation trigger the uterine muscle contractions. Higher levels of prostaglandins are associated with more severe menstrual cramps.

There are a host of home remedies for menstrual pain! One of the tablets that most women severe during their period cramps is the Meftal Spas tablet. It is readily available in Indian pharmacies.

Meftal-Spas Tablet provides relief menstrual cramps and pain in the chest and pelvic region. It is also prescribed by doctors for treating abdominal pain as it relieves spasms in the muscles of the stomach and intestines. Once consumed, it takes 20-30 minutes to show the result. This tablet should not be taken on an empty stomach as it might lead to a couple of side effects.

You May Also like this: Drotin DS Tablets Uses, Side Effects and Dosage

Doctors recommend 1 tablet of Meftal Spas during the severe (unbearable) menstruation pain. This medicine should not be taken more than once at a time. In a single day, one may take 1-2 tablets of Meftal, depending on the severity of the pain. One should avoid taking medicine frequently as it might have harmful effects on the body.

Also, take the tablet along with the water and do not chew it. Make sure you do not take this tab on an empty stomach.

How does Meftal Spas Works?

This medicine contains two drugs, i.e. Dicyclomine (anti-spasmodic) and Mefenamic acid (NSAID. Dicyclomine relieves contractions that are associated with smooth muscles of the abdomen. On the other hand, Mefenamic acid blocks the effect of the chemical messengers in the body, called cyclo-oxygenase (COX) enzymes. These enzymes make a chemical called cyclo-oxygenase (COX), making another chemical prostaglandin (PG). Once COX enzymes are blocked, less PG’s are produced, which further reduces the intensity of the pain and inflammation caused.

It is always wise to consult your doctor before taking any medicine and adhere to the dosage recommended by him or her. If taken frequently, it might lead to a couple of side effects listed below. In case you witness any of the side effects, reach your doctor immediately.

How to Store the Meftal Spas?

Meftal Spas tablet is one of the common medicines for treating menstrual pain. This tablet is a Non-steroidal anti-inflammatory drug, which also works as a pain killer. The medicine should consume during severe period cramps, and one should restrict the number of tablets to 1-2 in a day. Also, it should not be taken frequently. Whatever the problem and how severe it us do reach out to your doctor and follow the medication according to his guidance.

1. What Meftal spas are used for?

This medicine is taken for relief in menstrual pain and pain in the abdomen.

2. Does Meftal Spas cause infertility?

It has mefenamic acid that delays ovulation which further can affect fertility. However, no study shows the medicine has a direct impact on fertility.

3. Is Meftal spas good for gas?

One should take this tab on the occurrence of severe cramps, and if you have to take it, restrict it 1-2 in a day.

The tablet reduces the intensity of menstrual pain. However, it does not affect bleeding/ flow during menstruation.

If taken under your doctor’s guidance, the medicine is safe.

7. How long does Meftal Spas take to work?

8. Is Meftal spas a painkiller?

It is a Non-steroidal anti-inflammatory drug that is also known to be a painkiller.

No, it should not be taken on an empty stomach as it might have adverse effects.

10. Can Meftal spas be taken for headaches?

One should consult the doctor before taking medicine for treating headaches.

BESCOM Customer Care, Complaint, Helpline, & Toll-Free Numbers
How to Play Teen Patti and What are the 3 Patti Rules?