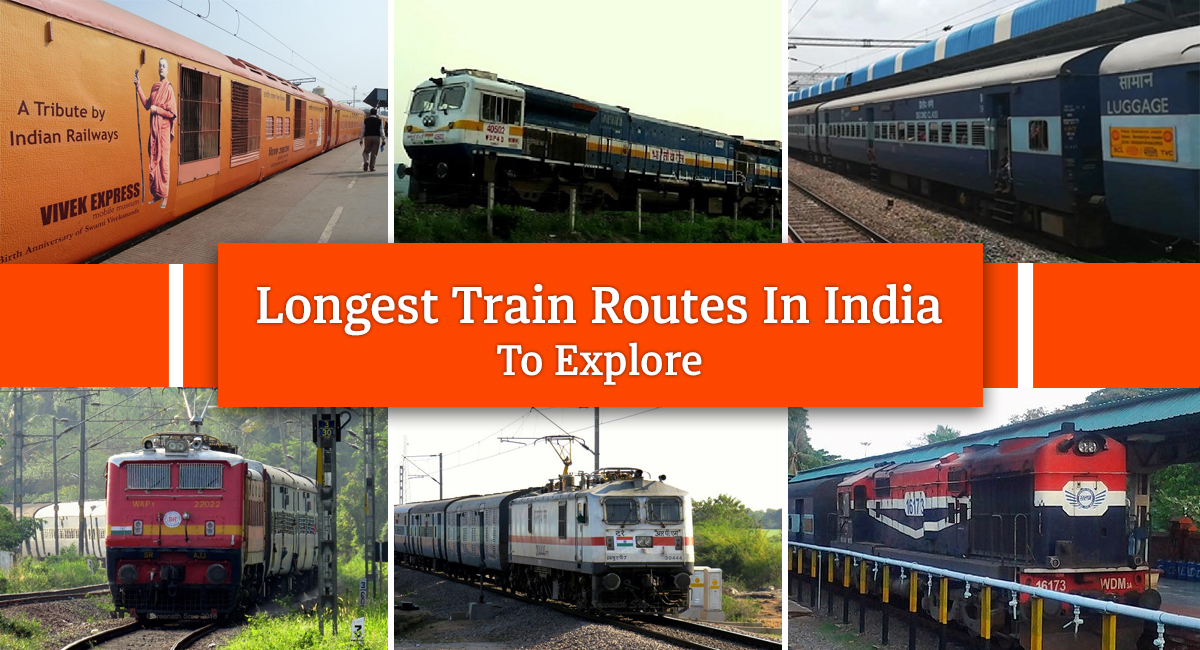 We all use trains for our local or interstate trips, and you will be surprised to know that India is ranked one among countries with more than 5 Billion passengers per km. With over 7,500 stations in the country, India is also one of the world’s largest rail networks. Talking about networks, you also need to know that among the top 10 longest train routes in the world, India has “Dibrugarh to Kanyakumari” as the ninth longest route in the world. It is also one of the longest train routes in India, and Vivek Express covers it.

Some of the trains cover the longest routes of India and are also known for their flawless services. You can travel from the topmost location of India (Jammu) to its very lower part (Kanyakumari). Indian railway is known for mass handling of such massive traffic daily. Just read the blog, and you will find more amazing and mind-boggling facts about Indian railways.

Vivek Express is one of those trains covering the world’s ninth longest and India’s largest train route. The route is known for its total distance of around 4286 Km, which is included in 82 hours and 45 minutes. The train originates from Dibrugarh (Northern Assam) to Kanyakumari (Southern end of India).

One of the interesting facts of this train is that it was started on the 150th birth anniversary of Swami Vivekananda. Also, the name of the train Vivek express is inspired by his name. Another thing is that the vivek express route is so long that it runs only once a week. The Kanyakumari Vivek express route covers around 8 states with over 56 scheduled stops.

Himsagar express follows the second largest train route in India, from Jammu Tawi to Kanyakumari. The train reaches one of the so-called highest railway routes in India, Katra. It covers the total distance of about 3797 Km within 72 hours. Now some of the facts about the train are that it stops at 73 stations of 12 states. This is amazing, covering such a long distance and at the average speed of 52km/hr.

The train is only surpassed by Vivek express, in terms of the distance and time. It is among very few trains that can take you to the Shri Mata Vaishno Devi Katra. Himsagar express is also a weekly train, and that’s obviously because of the distance it covers.

Ten Jammu Express also covers one of the longest routes of India Tirunelveli in Tamil Nadu to Shri Mata Vaishno Devi Katra temple in Jammu and Kashmir. It includes a total distance of around 3600 Km with a running time of around 71 hours. One of the interesting facts is the train runs at an average speed of 47km/hr and stops at 62 stations in the complete journey. The train has a sleeper and AC 2 class, and the best thing is that it runs twice a week.

You can get this train on Monday and Friday every week; it is one of the best trains to travel. You can check the official website for time, but it usually departs from Tirunelveli at 16:00:00 and reaches Jammu Tawi at 15:20:00.

Navyug Express is also the fastest train in India, and it is also known as the fourth-longest train to cover a total distance of around 3600 km. The train runs at an average speed of around 51 km/hr and covers almost 12 states. With the halts of 61 stations in the complete journey, it takes around 68 hours and 20 minutes to cover the total distance.

Some of the major names of its halt stations are Agra, Delhi, Gwalior, Jhansi, etc. The train also has the sleeper class, AC 2, and AC 3 class for more convenience. If you want to travel to Jammu, then this train can be your best choice.

Covering a total distance of around 3550 Km, this train covers the fifth-longest train routes in India. The train runs at an average speed of about 55km/hr and completes its journey in a total of 65 hours. One of the bad things that all trains have is their scheduling of once in a week. This train also stops at 48 stations in its journey of around 7 states of the country. It originates from the capital city Thiruvananthapuram to another capital city Guwahati.

The train also has AC 2, AC 3, and sleeper class for the travelers. The day decided for this train is Sunday, it starts its journey on Sunday and completes it after 65 hours of continuous travel.

It is the sixth-largest route train of India, starting from Yeshwantpur to Dibrugarh. It covers an overall distance of 3547Km. The train covers some of the country’s major cities like Bengaluru, Dimapur, Vijayawada, Guwahati, Kolkata, etc. One of the main things is that it has only 35 halt stops in between. The time it takes to complete its journey is around 68 hours, in which it passes through almost 7 states of India.

The fun fact is that the train name is Dibrugarh express, but it originates from New Tinsukia, which is almost 15km from Dibrugarh. You can book tickets for any class like AC 2, sleeper and AC 3.

Raptisagar Express starts from the Ernakulam Junction in Kerala to the Barauni in Begusarai district of Bihar. This whole journey consists of almost 60 stations where it halts. The train runs at an average speed of around 55km/hr, and it can be said as the fastest train in India by average speed. It completes its journey in almost 62 hours that includes covering 8 states of India.

The train also runs every week, and it is always scheduled for Monday. Now one of the main things is the 60 halt stations; they are so many, but then also it completes its journey on time.

Another fastest train in India is Kerala Sampark Kranti Express; it has average speed of around 62km/hr. The best thing is that it has very few halt stations and all of them are big junctions. The train covers approximately 3398 km in just 54 hours and 25 minutes that include the crossing of about 9 states. If you are looking for something fast and time-saving, then this train is the best choice to go.

It also runs weekly, and you can avail tickets for all classes like the sleeper, AC 2, and AC 3.

Amritsar Kochuveli Express also runs on one of India’s longest train routes, starting from Amritsar to Kochuveli. The total distance the train covers is around 3295 Km, and the best thing is that it covers it in 57 hours and 20 minutes. The train runs at an average speed of about 60km/hr that gives it an edge of time-saving.

The train crosses almost 7 states of the country and stops at 24 stations in its complete journey. It is also a weekly running train with almost all class sleepers, general, AC 2, and AC 3.

This one is the last in the list, but not the least; it covers around 3154 Km of distance within 57 hours and 25 minutes. The complete journey consists of 24 halt stations and a crossing of about 9 states. One of the best things is the train speed; the average rate of the train is around 60 km/hr.

The train starts its journey from Uttarakhand (Dehradun) and reaches its final destination Kerala (Kochuveli). It is the tenth longest train route of India, and this is currently operated by southern railways.

So, this is the list we have for the 10 longest train routes in India. We provided all the detailed information which you may need for your next trip. One of the main things in the list is the Kanyakumari Vivek express route; it is not only India’s longest but also among the top 10 longest train routes in the world. In the list, we tried to include the top longest route, and if you think that we should add some more names or change some names then please comment down, we will surely appreciate your efforts.