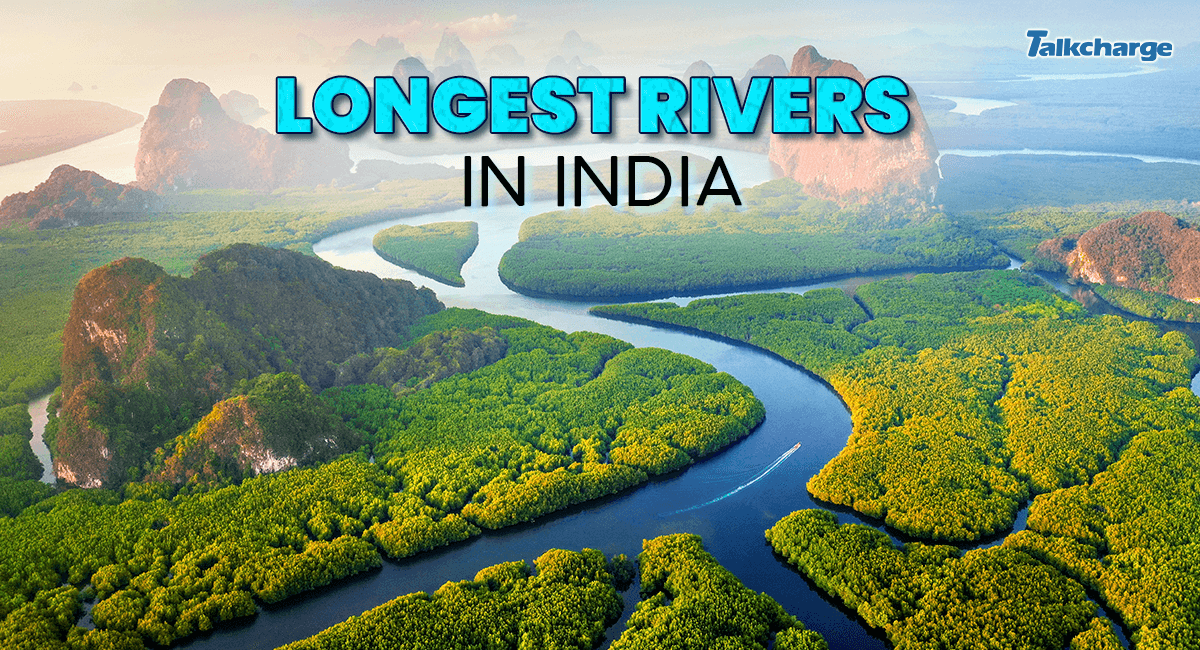 Rivers are natural flowing water bodies! In India, rivers like Gaga, Yamuna, Indus, Krishna, and Brahmaputra are revered as Hindu God and Goddesses. These rivers have huge significance in the history of the country. Besides holding an immense mythological significance, rivers provide irrigation support, drainage, hydroelectricity, food, transportation and other activities to many parts of the country. The subcontinent of India has many long rivers which begin from the small stem and ultimately pours into the oceans-Bay of Bengal or the Arabian Sea. Also, many of the rivers like the Indus and Brahmaputra are Transboundary Rivers as they flow in more than one country. While Indus is the longest river, however Ganga is the longest river in India as it is 2525 km long, whereas Indus is 1,114 km long. Read more to know other long rivers in the country.

Also known as the Ganges, Ganga is the longest river in India. Revered as the most sacred river, Ganga holds great significance in India’s mythology. It originates from the Gangotri glacier in Uttarakhand and begins flowing from Devprayag. It flows through Uttrakhand, Uttar Pradesh, West Bengal, Bihar and then merges into the Bay of Bengal. It is also a transboundary river of Asia as it flows through India and Bangladesh. Ganga supports 11 % of the world’s population as it crosses through densely populated regions on the earth. The river is home to 140 species of fish along with the other water and land species.

The Godavari is the second-longest river in India. It originates from Triambakeshwar, Maharashtra and drains through Maharashtra, Telangana, Andhra Pradesh, Chhattisgarh and then finally merges to Baby of Bengal. With a length of 1,465 km, Godavari is the longest river in South India, and thus, it is also known as Dakshina Ganga. The river forms one of the largest river basins in India. It is also one of the sacred rivers with several pilgrimages on its banks.

Also known as Krishnaveni, it is 1,288 kilometres long. Krishna River is the primary source of irrigation for several states naming Maharashtra, Karnataka, Telangana and Andhra Pradesh. It originates in the Western Ghats, close to Mahabaleshwar. It flows through the states of Karnataka and Telangana. The largest tributary of the river is the Tungabhadra River, with a drainage basin of 71,417 km2. And, the longest tributary of Krishna River is the Bhima River, which makes a run of 861 km.

Origin: Near Mahabaleshwar in Maharashtra

Also known as Reva, Narbada or Nerbudda, the Narmada River is also one of the longest rivers in India. Narmada is a Sanskrit term which means “The Giver of Pleasure”. Narmada River is also a Holly River like Ganga, Godavari, Yamuna, and Kaveri.  It is the largest flowing river in Madhya Pradesh. The river is known to be the Life Line of Madhya Pradesh and Gujarat,” as it is the main source of irrigation in both states. It rises from Amarkantak Plateau in Anuppur district Madhya Pradesh and forms a traditional boundary between North and South India, and then it merges to the Arabian Sea. Along with Tapti and Mahi River, the Narmada is the longest river in India, flowing from east to west.

Tributaries: The Shakkar, The Sher, The Tawa (longest tributary), The Dudhi, The Ganja, The Barna, The Hiran, The Karam, The Choral and The Lohar

Yamuna is next in list of longest rivers in India, with a length of 1,313 km. Also, it is the second-largest tributary river of the Ganga and the longest tributary in the country. It originates from Yamunotri Glacier and merges with the Ganga at the Triveni Sangam in Allahabad, which is also famous for Kumbh Mela that takes place in 12 years. Like Ganga and Godavari, Yamuna holds a huge significance in Hinduism and is also worshipped as goddess Yamuna.

One of the most beautiful rivers of India, The Indus, is also part of the longest river in India list. While the Length of the river in India is 1,114 km, its total length is 3,180, which is the reason why it is believed to be the longest river in India. Indus River flows through Ladakh to Pakistan and then empties in the Arabian Sea. It has five main tributaries that are Chenab, Jhelum, Ravi, Beas, and Sutlej rivers. Since these five tributaries flows in Punjab thus, the state got its name Punjab. It is also known as land of five waters or five waters. The river originates near the Mansarover Lake in the Tibetan Plateau. Indus River is the main source of water in Pakistan and Punjab.

Known by different names in the region it flows, the Brahmaputra is also one of the largest rivers in the world. In India it is called Brahmaputra, Yarlung Tsangpo in Tibet, the Siang/Dihang River in Arunachal Pradesh, Luit, Dilao in Assam and as Jamuna in Bangladesh. It originates from China and flows through India and Bangladesh while providing a significant water supply for economic growth and ends in the Bay of Bengal.

Next on our list of longest rivers in India is Mahanadi. It is a primary river in East-Central India. It flows through Chhattisgarh, Jharkhand and Odisha. The river is also famous due to the Hirakud Dam, one of the world’s tallest dams. Like many seasonal rivers, Mahanadi is originated from a number of hilly torrents. The river is the main source of irrigation in Odisha. It holds cultural and religious significance, and thus, its water is regarded pious for any occasion.

Kaveri or Cauvery is one of the important and longest rivers in India. This beautiful river flows in South Indian States-Karnataka and Tamil Nadu and then pours into the Bay of Bengal. It is considered as the lifeline of South Indian states. It has huge significance in Hindu culture; thus, it is also worshipped as the Goddess in India. The river is also used as a reservoir for hydel power and irrigation system.

Also called the Tapti River, the Tapi River is a primary river in Central India. It is also believed to be one of the important rivers in peninsular India and the Narmada and Mahi River. It flows from east to west while being the crucial water source in some parts of Madhya Pradesh, Maharashtra, Deccan Plateau and Gujarat and then merges into the Gulf of Cambay in the Arabian Sea.

1. Which is the longest river in India?

The largest river in India is River Ganga, with a length of 2,525km.

2. Is Ganga the longest river in India?

Yes, In India Ganga river is the longest.

3. Which is the longest river in South India?

The Godavari, also known as Dakshina Ganga, is the longest river in South India, with a length of 1465 km.

4. Is Indus River Longer than Ganga?