All Posts / General / List of Most Literate States in India 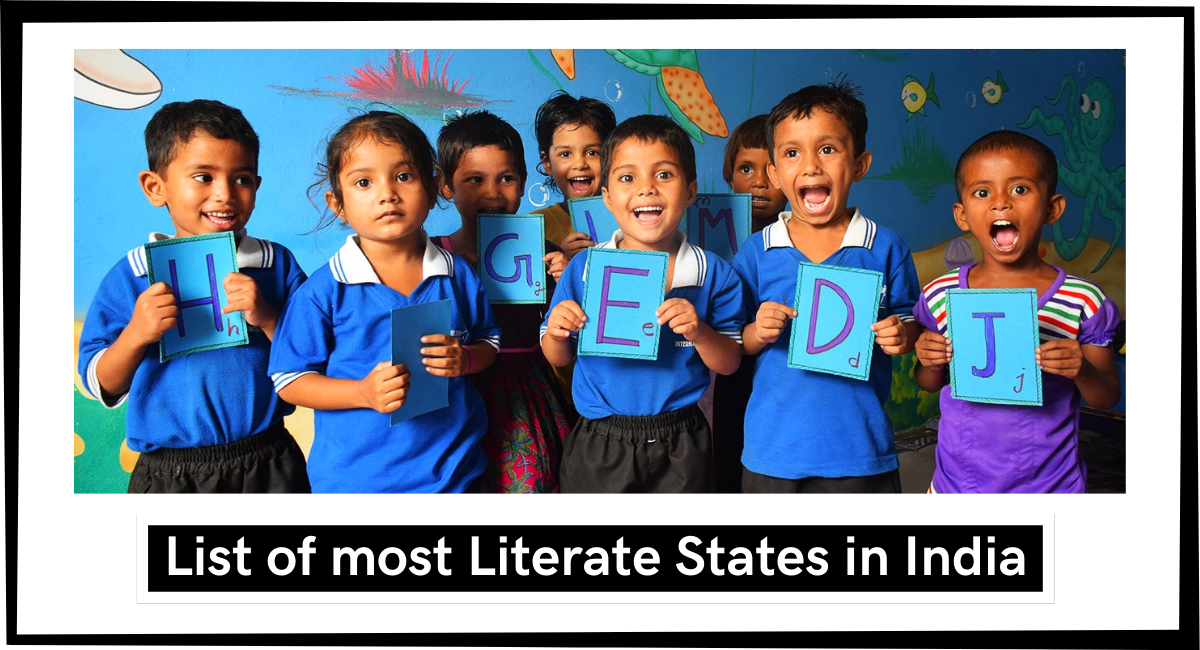 “Literacy in itself is no education. Literacy is not the end of education or even the beginning. By education, I mean an all-round drawing out of the best in the child and man-body, mind and spirit.“   – MK Gandhi

India is the homeland for one-sixth of the world’s population. With the huge population burden, our country has identified that education is the key to turn this into an asset. The core development of any state depends on the literacy rate of that state.

Here you can check the rank-wise list of most literate states in India. You will notice the sheer relation between the literacy and development of the state. So, why don’t you continue reading to find more details about the educated states, gender-wise literacy rate, and least educated states?

List of Literacy Rate of 10 Different States in India

Go through the table below to know the statistics of the literacy rate in India. Later we have also given the details about the 10 most literate states In India.

Most Literate States in India You Should Know About

Literacy and education are directly proportional to the development and growth of the state.

Kerala contributes 4% to the Indian economy, which is huge as compared to other large states. So do you see the relation?

Higher is the literacy rate, and lower is poverty, and higher is the employment rate at the macro level. Therefore, let’s look at the states that have successfully made it to the top most literate states in India. Isn’t it intersecting to know their success stories and get inspired!

Here is the list of the most literate state, so go ahead and read more.

With a literacy rate of 92.02%, Kerala holds the first position in the list of most literate state in India.

This rank did not come easy for an agricultural-based small state. We say this because Kerala has actually worked hard to educate the people of the region.

In 1998, ‘Kerala State Literacy Mission Authority’ was set up as an autonomous body under the Education department. With the slogan of “Education for all and education forever”, this institution worked hard to reach all areas.

Consequently, Kerala’s literacy rate crossed 92% under this program, which educated urban slum, coastal, tribal populations. They also focused on educating jail inmates. Isn’t it something the whole country should follow?

Kerala continues to educate and skill its people to achieve 100% literacy rate. You might have heard of Karthiyani Amma from Kerala, who aced the Aksharalaksham literacy examination at the age of 96. What else do we need to encourage people across the country to get inspired to learn!

The northeastern state, Mizoram, is second among the most literate states in India. This is no joke as the state had to take effective steps to make this possible.

We have seen this state has inspired the nation in more than one way. Now it is aiming to reach the 100% literacy rate.

To aid the education and literacy program and mission, the state government gives Rs.130 crore of its total budget. As a result of which, we see that there are 2,000 schools in the state.

This means that there is one school for every 100 Mizo children. There is also a village education committee to oversee the literacy programs from the basic level.

Government rewards Rs.100 to encourage the adult Mizo to take out time and educate other illiterate Mizo. The scheme of “each one teach one scheme” has proved to be novel and effective.

Recently Mizoram Chief Secretary H.V Lalringa stated, “We are a 100 percent Christian state, so we have to be 100 percent literate.” He adds in his statement that “Our success is due first to the will of the people to be closer to God. The church and non-governmental organizations have played a vital role in this”.

Lakshadweep Island holds the third position in literacy rates according to Census 2011. There were only 9 schools at independence, but now we see it has a literacy rate of 92.28%.

This has happened because of its effective literacy programs that have changed the face of education of this union territory. Consequently, the region’s major population is matriculated and taking up professions like doctors, engineers, postgraduates, and more.

It is easy to say but difficult to make the changes. Lakshadweep has shown that even away from the mainland, places can grow the literacy rate.

One of the highest literacy states is Tripura, which is the north eastern state of India. This is amazing to know that a small state can encourage the people of the state to love the learning process of reading and writing.

To achieve maximum literacy state in India, the state had set-up Zilla Saksharata Samities in every district. This has really helped in the growth of the literacy rate over a decade. And the statics supports it by showing decadal growth of 14.56% when it comes to literacy of the state.

For the state which is not well connected with the mainland, it is tough to reach every individual. Now using educational websites, these percentages are going to rise. We are waiting to see the census of 2021.

Goa is known for its beaches, you know it if you have visited Goa to enjoy. Along with that, it is also one of the most literate states in India.

The literacy rate of Goa is 87.40%. Out of this, the male literacy rate is 92.82%, and that for females is 81.84%. The late Chief Minister of Goa, Manohar Parrikar has focused on making the state better literate.

The state efforts showed results in make it reach the fifth position in the list of most literate states.

The western union territory of the country, Daman and Diu is one of the states that contributed to achieving maximum literacy rate in India.

It has seriously implemented government literacy programs in every corner of the UT. This has shown positive results in the percentage growth of literacy rate.

Another Union Territory in the list of most literate state in India is Puducherry. The literacy rate of the UT has reached to 86.55%.

Recently we have seen that Puducherry initiated the establishment of Farmer’s digital literacy centers. So the presently recorded decadal literacy growth of 5.31% is about to grow more.

The town of Chandigarh, or call it Union Territory, is one of the country’s most planned cities. The infrastructural growth also influenced literacy growth for years.

According to today’s educational landscape, we see the literacy rate growth is raising the demand for jobs. Consequently, the employment rates are not met, so if you are figuring out the career for you, you can take Online Career Counselling.

The second most literate state in India is Delhi if we go by the NSSO survey of 2018. This was possible by the rigorous efforts of the governmental schemes.

Today, the Education Minister Manish Sisodia and educator Atishi Marlena have played a vital role in growing the capital’s literacy and education quality.

This is about to increase the literacy rate, so let’s wait to look for census 2011. The National Education Policy is also going to bring significant changes.

The well-known places to visit during your vacation could be Andaman and Nicobar Islands this season. But did you know that this scattered group of islands has 86.27% literacy rate? Interesting! Right?

However, few states still need to focus on the growth of literacy of the states. Here is the list of five least literate states in India. This is to show the reason for the underdevelopment of these states.

“Educate one man, you educate one person, but educate a woman, and you educate a whole civilization” says MK Gandhi. This is a great women empowerment quote to encourage females to contribute to the development of the country.

The most literate state in India has seen the growth of women’s literacy. Today when we compare the stats, we notice the narrowing of the gap between male and female literacy. This is, of course, good news. We hope this gap reduces to ‘zero’ one day.

Among the growing literacy rate of different states in India, there are some states worth mentioning. So here we have listed 10 most literate states of India and mentioned details about each state and UT. You will also find a list of least literate states in India to show the reality and need to put more effort into better educated tomorrow. Thereby, we hope this blog was helpful and informative for you.

1. Which state has the highest literacy rate in India in 2019?

Kerala has the highest literacy rate in India according to census 2011.

2. What is the literacy rate of India according to the census 2011?

3. Which is the most literate district in India?

The Serchhip district of Mizoram is the most literate district in India, with a 98.76% literate population.

4. When do we celebrate International Literacy Day 2020?

8th September is celebrated as International Literacy Day every year.

5. Which state is ranked last in education?

Bihar is ranked last according to census 2011.