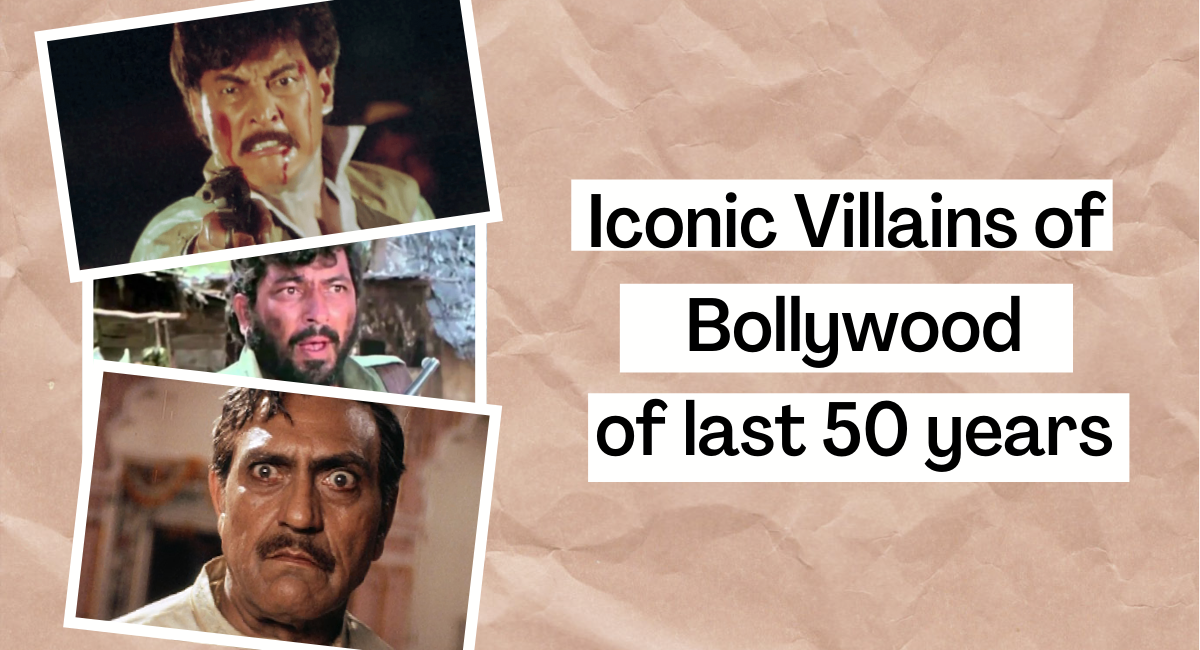 The hero of the movie outshines because of the villain! This means we cannot take the villains lightly. The Indian film industry is full of interesting and fearsome Bollywood villains who make the life of heroes miserable.

In this blog, we have mentioned the famous and iconic villains of Bollywood of last 50 years. So enjoy the read and get to know more about villains who are hard to forget because of their actions, appearance, or dialogues.

List of Top Villains of All Time in Bollywood

The iconic and most recognized villain of the silver screen is none other than Amjad Khan as Gabbar Singh. His classic dialogue, “Kitne Aadmi the?” is known by the youngsters even now. In the life span of 52 years, he worked in 130 movies with influencing negative roles.

Sholay was one of the movies which have gained tremendous popularity not only because of Jay, Veeru, and Basanti but also because of the impactful performance of Gabbar Singh. He played the role of a ruthless and cunning villain. After Sholay, he also worked in Inkaar, Des Pardes, Satte Pe Satta, Naseeb, etc.

Amrish Puri was an accomplished actor in Bollywood. He played many roles, but he outshined the role of villain. He received praise and credibility from the audience and critics. Among all his movie characters, he is profoundly remembered as Mogambo from the movie Mr. India.

Sometimes, the protagonist’s role is overshadowed by the presence of seasoned actors playing the role of antagonist. This happened with Amrish Puri every time he was on the silver screen. It makes him one of the most loved Bollywood villains of all time. However, we lost this cherished villain to rare blood cancer in 2005.

The Sikkim born actor Danny Denzongpa has made a remarkable presence in Bollywood. He is a seasoned actor who justifies the character he plays in movies. Among all his roles, he has mastered the role of villains of Bollywood.

He gave his outstanding performance in Agneepath (1990) as Kancha Cheena. His ‘ussool’ dialogue like “Apna ussool kehta hai.. daaye haath se jurm karo, baayen hath ko pata bhi na chale” was some lines related to him ever after. The well-known villains have also contributed to great Bollywood dialogues of all times. He is a recipient of India’s fourth-highest civilian honor, Padma Shree, after his career in the film industry for four decades.

Pran Krishan Sikand was a respected actor who has carved his name among talented actors of Bollywood. One of his remarkable role characters was Raka in the ‘Jis desh me Ganga behti hai’. He has a very villain like hairy outfit with a signature villain hand move.

Pran has won the reputed Padma Bhushan in 2001 and Lifetime awards. It is said that a shining star spreads the light far. Likewise, he was recognized as the top 25 Asian actors of all time by CNN. On top of this, he is the recipient of the Dadasaheb Phalke Award, which is the highest national award for cinema artists.

Ajit Khan had a long film career of over forty years. He has played significant roles in well-known movies like Mughal-e-Azam, Nastik, Milan, Naya Daur, and more. That’s not all; he has worked in more than 200 films. But there are few characters which stick to the audience.

In his case, Teja was one such character that made Ajit Khan make his name to the list of villains of Bollywood. Teja is remembered for his hairstyle and appearance. His gang members and Mona darling by his side were strong and impactful villain gangs in the movie to counter the hero.

We realize that even the hero is made a hero because of the powerful villain in the counterpart. If we observe the Romantic movies of all time, the successful love story had fierce villains of Bollywood.

The 1900s was the age in Bollywood, which gave us impactful villains who are hard to forget. Shakal is among other Bollywood villains of the 90s from the movie Shaan. This role was played by Kulbhushan Kharbanda. He still works in modern-day movies and series.

The part of Shakal is iconic because of the way he taps his bald head and his powerful dialogue delivery. The character is known for gambling and the hobby of petting crocodiles and sharks. Such villains are surely hard to forget.

Another famous Bollywood villain on our list is Gulshan Grover, also known as the ‘Bad Man’ of the Indian movies. Since 1980, he has acted in more than 400 films with an array of supporting roles. However, our memory of Tyson in Mohra(1994) cannot fade away.

Grover was portrayed as a bad man in this movie with the lines like “Chaaal chalne ki koshsih ki to agli baar mai nahi bolunga, meri AK47 bolegi”. Further, he justified most of the negative roles in the movies. He is recently cast in ‘Sooryavanshi’ by Rohit Shetty.

“Crime Master Gogo naam hai mera, aankhen nikal ke gotiyan khelta hun main.” No one can forget this dialogue from the movie ’Andaz Apna Apna.’ Our own Shakti Kapoor played the role of Crime Master Gogo. He is undoubtedly an accomplished actor who had excelled in negative as well as comic roles.

In the movie, he calls himself “Gogo, Mogambo ka bhatija” and thoroughly entertains the audience with rare combo of comic and ruthlessness. He is still seen in many movies and various roles. Recently he was seen in the famous reality show Bigg Boss.

Dilip Tahil played the iconic anti-hero role of Madan Chopra in Baazigar. He played the role of conspirator and evildoer very convincingly. He was appreciated for his role-play by the audience as well as critics.

Recently, he twitted, “Madan Chopra will remain one of my most favorite characters that I’ve played in my acting career.” After his role in Baazigar, he became a very popular antagonist. He is still one of the most celebrated and cherished Bollywood villains.

Who doesn’t know the Munna Bhai actor Sanjay Dutt. However, he is not only known as a protagonist but also justified the role of the antagonist in the remake of Agneepath in 2012. The critics remarked that this is one of the darkest roles played by Sanjay Dutt.

This made us put him in the iconic Bollywood villains name list. He is the recipient of many Filmfare awards for his excellent acting.

Prakash Raj has won IIFA Best Villain Award for this role in 2012. His net worth grew after his role in Singham. If you are curious, you can read more about the Richest South Indian Actors. Further, Prakash Raj continues to act in Kananda and Telugu movies.

On our list, the next Bollywood villain is Kay Kay Menon, who played  Khurram Meer in ‘Haider.’ For this role, he received IIFA Award for Best Performance in a Negative Role. The movie was the Hindi adaptation of the famous tragedy ‘Hamlet’ written by Shakespeare.

Ranveer Singh appeared on the silver screen with the innocent and chocolate boy role in ‘Band Baja Baaraat.’ Ranveer has come a long way through his hard work from that role. He played the first negative role of Allauddin Khilji in ‘Padmaavat’ with utmost dedication and involvement.

Ranveer’s determination to play this role made him visit a psychiatrist as he was too involved in the dark character of Alauddin Khilji. However, his efforts showered awards and appreciation for the movie. He received IIFA Awards Best Actor and Filmfare Best Actor (Critics) in 2019. This was one of the Highest Grossing movies in Bollywood.

The Bollywood villains like Mogambo, Shakal, and Gabbar Singh are some of the evergreen characters in the Indian film industry’s history. Adding to the list, we have seen the fantastic work of new-age actors like Kay Kay Menon, Ranveer Kapoor, and more. Hence, this blog acknowledges the best negative roles played in the recent past. We hope you enjoyed reading about the bad guys of Indian movies. Let us know who is the loved and witty villain for you?

1. Who is the best villain in Bollywood?

The actors like Amjad Khan, Amrish Puri, Danny are some of the best villains in Bollywood. Go through the list of villains mentioned above.

2. Who is the baddest villain?

You can pick who is the worst villain according to you from the list given in this blog. The worst villain could be one who finds pleasure in killing, conspiring, and choosing wicked ways to make life miserable for others.

3. Who were the best Bollywood villains of the 90s?

The 1990s gave some well-known villains to the Indian film industry like Amrish Puri, Pran, Gulshan Grover, and more. You can go through the list of iconic villains of Bollywood in the last 50 years.

What is CIF Number and How to find CIF in SBI, CBI & Indian Bank?
Top 10 Highest Mountain Peaks in India