How to Port Vodafone to Airtel Network?

All Posts / Recharge / How to Port Vodafone to Airtel Network? 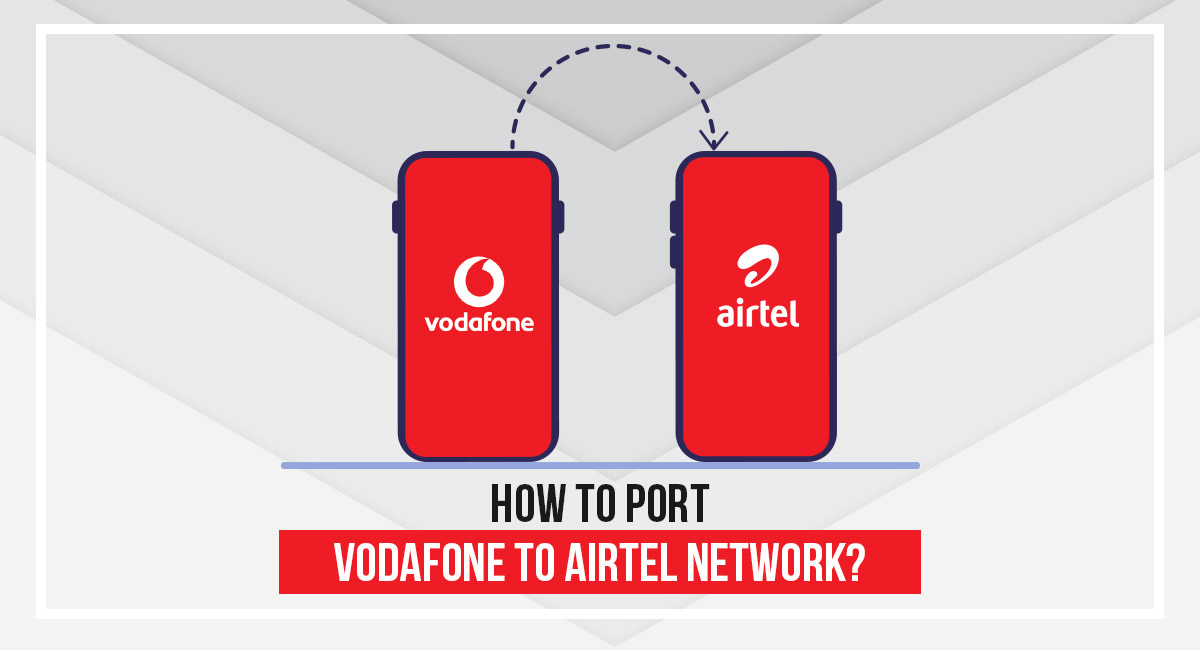 There are many known teleoperator services providers in the country like Jio, Airtel, and Vodafone (now known as VI), which provide the best of cellular services. However, at times the particular service provider might not be able to provide the services that effectively in the specific area as compared to the other.

Well, if you too are facing the same problem, then you are right place. Here we have curated easy ways to port Vodafone to Airtel network.

Steps to Port Number from Vodafone To Airtel

There are majorly four steps through which you can port from Vodafone to Airtel network easily.

1. Generate a Porting Code to Port To Airtel From Vodafone

In order to port your number from Vodafone to Airtel, you would have first to generate the porting code. All you have to do is send an SMS ”PORT<space><current mobile number>.’’ From your registered number and sent it to 1900. After sending the SMS, you will instantly receive an SMS with the unique porting code. This code will further help in the porting process. Since the code would be expired in 4-days, you would have to place the porting request online within four days.

Once you receive the SMS along with the 5unique porting code, visit the Airtel store near you and connect with the customer support executive to initiate the procedure of port to Airtel from Vodafone.

The Airtel customer executive will ask you for the documents that include address proof and passport size photographs. Once your documents are verified, you will be asked for the portability fee.

After paying the portability fees, the process of porting from Vodafone to Airtel will be finished, and soon you will receive your SIM card.

How Much Time will It take to Port?

The entire process of porting from Vodafone to Airtel will take 5-7 weekdays. During this time, users would have to use their old Vodafone connection (prepaid or postpaid). After 5-7 days, the existing SIM card will get deactivated. Subsequently, insert the new Airtel SIM card and select the ideal Airtel recharge plan to start the cellular activity.

How do I know that Porting Process is Successful?

Before the porting process is complete, you will receive an SMS on your alternate number that you have provided to the Airtel customer executive. The SMS would confirm that the porting process has been successful. The SMS would also have a tele-verification code. Insert your new Airtel SIM card into your smartphone and complete the verification process. Call at ‘59059’ and type the tele-verification code to complete the process.

You will need the following documents in order to port your Vodafone SIM to Airtel:

Factors to Consider while Porting from Vodafone To Airtel

Read Also: How to Port Vodafone to Jio Network?

1. What is the Eligibility to Port Vodafone to Airtel Network?

In order to port from Vodafone to Airtel network, the user would have to use his existing number for more than 90 days. If you have recently ported the number from another network and want to port again to the next network, then the porting process would fail, and the user will not receive the unique porting code.

2. What is a unique porting code?

Unique porting code (UPC) is a verification code, which the subscriber receives from the teleoperator after sending the application for porting through the MNP service. It is then used by the Airtel customer executive to verify the portability request.

3. Is there any validity of UPC?

Yes, the unique porting code is valid for 4-5 days after the SMS containing the UPC is received by the user. The UPC is important for the porting process. Also, you can use it only one time.

4. What will happen if the UPC is expired?

In case the UPC is expired, you would not be able to continue the porting process. You would have to make a porting request again in order to get UPC that will enable you to port Vodafone to Airtel network.

5. Can I port my Vodafone postpaid or prepaid number to Airtel prepaid or postpaid number?

Yes, you can port Vodafone number to Airtel number (prepaid or postpaid) through the aforementioned ways. However, Airtel does not allow the user to port to prepaid numbers directly. You would have to port to Airtel postpaid number first and use it for three months before porting to Airtel prepaid number.

6. How can I port my Vodafone SIM online?

Send an SMS PORT<10-digit Mobile no> and send it to 1900. You will soon receive a UPC that you can use to port from Vodafone.