How Dominos Rekindle Itself To Win The Pizza Race In India?

All Posts / Food / How Dominos Rekindle Itself To Win The Pizza Race In India? 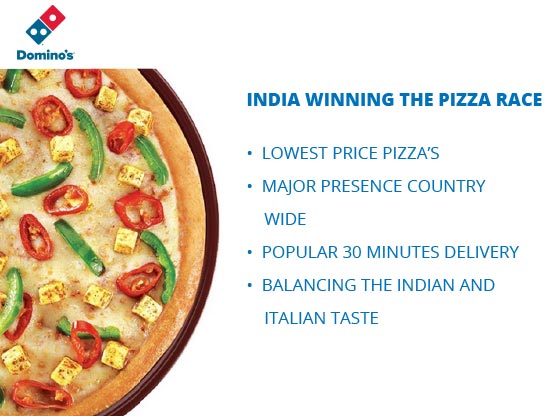 Domino’s started as one of the many Pizza chains in America, but with time it emerged as the best Pizza seller in the world. We just can’t say no to Pizza from Domino’s and with the availability of affordable price and Domino’s Pizza offers, this brand attracts us even more.

There’s no surprise that it finally engineered dominance in the flourishing Pizza industry. The fact that the chain became the largest Pizza seller around the world in February 2018 is proof that people love it a lot. But, how Domino’s reinvented itself to win in India while leaving behind the others in the market? There are various reasons for this and in this blog, we are going to discuss some of them.

In order to impress the Indian fundamentalists and the one who is concerned about the budget, Domino’s researched for eight long months and examined everything from the topping to the flour. After this, they introduced a new category in their menu named ‘Pizza Mania’. This included Pizzas starting at Rs. 59, as they knew no other player in the market is delivering Pizzas at such lower rates. And with Dominos coupons and Exclusive Deals, you can save even more. Their baking time period is just 8 minutes hence this category is an instant and the most favorable solution for all who can’t wait for their food!

From the big metropolitan cities to the small towns in India, there is no place left where you can’t find a Domino’s dine-in space in a distance of about 3 to 4 Kms. They choose their locations very precisely and studies the nearby streets, neighborhood and the traffic flow. They even check out every route, traffic lights, and intersection, so that the fastest delivery route could be found. And yes, the 30-minute delivery or free Pizza deal is still running in India even when it ended in the year 1993 in America. So, you can see how much determined they are to woo the customers in India.

They keep their customers updated all the time until the order reached them. From the confirmation of the order to till the time it reaches our door, the customers are well aware of the exact time, when the Pizza is made or baked. Well, plotting of the route is also the reason why 90% of the deliveries arrive within the promised 30-minute deadline.

The Domino’s menu is completely diverse and provides multiple tastes to satisfy the hunger of all. Also, the chefs here go on food walks on a regular basis in order to find out something new that can surely appeal to the Indian taste buds. You must have tried the Taco Indiana dish, no doubt it’s tasty. But, the surprising thing is that it is inspired by paranthas and kebabs. For the South Indians, they have included a spicy raw-banana Pizza, which provides the people with South Indian authentic taste.

Balancing the Indian and Italian Taste:

Although they keep on adding something new in their menu, they are always careful about it. We all have seen that ad of Domino’s, where a girl tells her brother that he is exactly the Taco Indian; that means Italian from the outside, but Indian from the inside. Everything on the Domino’s India menu is created while taking care of the choices of the targeted customers.
There’s no doubt that the team at Domino’s is working really hard in order to bring the customers what they desire for, be it their food or good service.

If you are feeling hungry after reading this, then order your Pizza now via TalkCharge. Here, we have exciting Domino’s coupons for Today that will get you some more discounts on your Pizza