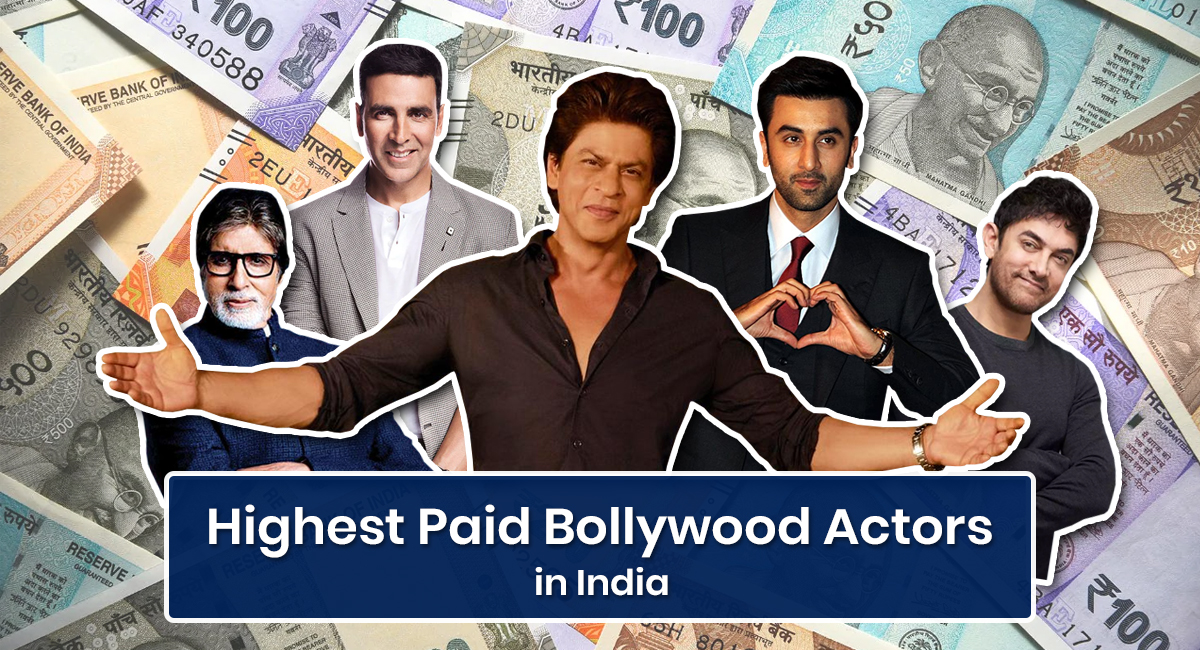 Bollywood is a fancy world that makes everything possible on earth. Thanks to Bollywood actors who leave no stones unturned to bring the character alive and enjoyable.

A particular movie character can make them a star overnight. However, one single flop movie can have a negative impact on their career. Stardom is not measured through a single factor. It is analyzed through various factors that include commercial hits of the actor.

With an increase in their popularity, stars are approached by brands for being the face of their brand and giving them lucrative money. Talking about the income, have you ever wondered how much these stars are paid for a movie, ads, and reality shows that they host?

The list has names of your favorite actors as well. Here we have listed all the highest paid actors in Bollywood 2022.

Known as Khiladi Kumar in Bollywood, Akshay Kumar is one of the highest paid actors in India 2022. The actor has starred in 113 movies that including Hindi and regional films. Amongst them, 52 were commercially successful.

Akshay Kumar was the first Bollywood actor whose film’s domestic net lifetime collection was more than Rs. 20 billion in 2013 and Rs. 30 billion in the year 2016.

According to the recently released list of ‘’The Highest-Paid Actors of 2020’’. So, Kumar is the only Bollywood actor who has been ranked on the list.

Next on the list of top highest paid actors in India is none other than Salman Khan. The Sallu Bhai of Bollywood is the most followed actor. There would be hardly any of his movies that have made less than 100 crores in recent years. The actor is currently hosting reality shows like Big Boss.

Talking about his movies, his last movie was Dabangg 3, in which he reprised his role of Chulbul Pandey. The film has had a worldwide gross collection of Rs.2309.3 crores and was amongst the highest-grossing movies of 2019, making Salman increase his salary.

Estimated Price per Movie: Rs. 100 crore + per film along with the share in the profits of the movie.

Next on our list of highest-paid Bollywood actors is the king of romance, Shah Rukh Khan. Badshah Khan is known for his romantic movies. SRK is an eminent Bollywood actor across the globe. The actor has worn many hats as he is a movie producer and television personality.

In the year 2005, he was awarded the prestigious award, Padma Shri. The actor has hosted many reality shows that including Kaun Banega Crorepati, Kya Aap Paanchvi Paas Se Tez Hain, and Zor Ka Jhatka. King Khan has so far appeared in the 80 movies and has also received 14 Filmfare Awards.

Over the years, Mr. Perfectionist, aka Aamir Khan, has established himself as one of the most influential and popular actors in Bollywood. Also, he is one of the top in the list of highest paid actor in Bollywood 2022.

The star enjoys an enormous fan following in India and China. According to Newsweek, he has been listed as the ‘’Biggest movie star’’ across the globe.

Aamir Khan is the recipient of many prestigious awards that including Padma Shri, Padma Bhushan, National Film Awards, Filmfare award, and an honorary title from China’s government in 2017.

Some of his movies, like Lagaan, Ghajini, Taare Zameen Par, 3 Idiots, PK, and Dangal, have earned him huge fans worldwide. Moreover, the actor has hosted an Indian television talk- Satyamev Jayate which touched on many social issues prevalent in India.

Price Per Endorsement: Rs. 5 to 7 crores per day

Hrithik Roshan is one of the highest-paid actors in India. The actor marked his debut with the Box office hit Kaho Naa Pyaar Hai in the year 2000 which won him many crucial awards.

The actor is also known for his dance skills and has hosted a dance reality show- Just Dance in the year 2011. He then became the highest-paid bollywood actor on Indian television.

Also known as the Greek God of the Indian film industry, Roshan has endorsed many brands and products and has also introduced his clothing like HRX.

The Megastar is undoubtedly one of the biggest stars and highest-paid actor in Bollywood. Amitabh Bachchan has won National Film Awards for Best Actor, Dadasaheb Phalke Award as a lifetime achievement award, and several awards at international film festivals & award ceremonies.

Also, the actor has also hosted reality shows like Kaun Banega Crorepati. The legendary actor has left no stones unturned to prove his acting in different niches. Some of his notable movies are Anand, Chupke Chupke, Pink, Deewar, Black, Sholay, Don, Zanjeer, and many more to name. Undoubtedly, the list of highest paid actors in Bollywood is incomplete without Amitabh Bachchan.

Known to be one of the highest-paid actors in Indian Cinema, Ranbir Kapoor has been featured in Forbes India’s Celebrity 100 list since 2012.

This highest paid bollywood actor has given a number of powerful performances, amongst which his role in Barfi and Rockstar is most remembered. In the year 2018, the Ranbir portrayed Sanjay Dutt in his biopic Sanju, which broke all the box office records and became the highest-grossing Indian film of all time. Also, the actor won the Filmfare award for the best actor of the year.

Currently, the actor is endorsing brands like Flipkart, Pepsi, Saavn, Panasonic, and several others

Popularly known as Singham of the Indian film industry, Devgn is among the highest paid Indian actor in Bollywood. The actor started his career in the film industry in the year 1991 with Phool Aur Kaante.

The actor also has his production company- Ajay Devgn Films, which was established in 2000. Moreover, Ajay Devgn has been the recipient of many crucial awards that including Filmfare awards.

He has done more than 100 movies and is one of the most successful Indian film industry actors with some the hits like Golmal, Singham, The Legend of Bhagat Singh, Drishyam, and many others to list.

Another celebrity on the list of highest paid actor in Bollywood 2022 is John Abraham. The Indian actor was a model before entering the Showbiz. John made his debut in Bollywood with the 2003 release-Jism, his powerful performance in the movie made him the star.

He has appeared in a number of commercial hit movies that include Garam Masala, Dostana, Houseful 2, New York, and many others to name.

In the year 2012, he ventured into the production and produced movies like Vicky Donor, which is remembered as one of the best comedy movies of all time.

Also, the actor is also the proud owner of the football team-North East United FC.

Saif Ali Khan, the Nawab Khan of the Bollywood industry, is the son of famous actress Sharmila Tagore and cricketer Mansoor Ali Khan Pataudi. In the year 2010, the actor was honored with Padma Shri for his incredible work in the film industry.

He’s a noted Indian actor and has appreciated his powerful acting in movies like Hum Tum, Parineeta, Salaam Namaste, and Omkara.

Also, he was awarded at the 52nd National Film Awards in 2005 by Dr. A. P. J. Abdul Kalam, where he won the best actor award for his movie Hum Tum.

Shahid Kapoor is one of the finest Indian cinema actors, his latest release like Kabir Singh and Padmavat. The actor started his journey in acting in the year 2003 with the leading role in the movie Ishq-Vishk.

Kapoor has earned many nominations and awards for his powerful acting in movies like Jab We Met, Udta Punjab, and Haider, respectively. In the year 2015, the year Judged dance reality show. Before starting acting, he was a dancer.

Kapoor has been listed in the list of the highest-paid actors in Bollywood with his recent Box office hit.

The actor made his debut in the year 2010 with Band Baaja Baaraat. The film received many accolades. Following this, the actor starred in a couple of Box office hits, amongst which his most remembered movies are Bajirao, Padmaavat, and Goliyon Ki Raasleela Ram-Leela.

Post the release of his last Blockbuster-Gully Boy, the actor demanded a hike in his remuneration and has become one of the highest-paid actors in Bollywood. He is also the highest-paid celebrity for advertisements.

Today touted as one of the highest-paid actors in India 2022; Tiger marked his debut in 2014 with the Action thriller Heropanti.

The actor is best known for his portrayal in movies like Baaghi, Baaghi 2, and War. Moreover, Shroff has been featured in the list of 100 celebrities in India by Fobes since 2018. Tiger is also a brand ambassador of many famous brands like Casio India, Avon Cycles, and Men’s innerwear brands.

Varun is counted among the celebrated Indian actors and son of famous director David Dhawan. He is one of the highest-paid actors in Bollywood and ranks on the list of Forbes India’s Celebrity 100 since 2014.

The actor started his career in the film industry as Assistant Director and forayed in the films with Karan Johar Directorial-Student of the year. He has many the Box office in his kitty, including Humpty Sharma Ki Dulhania, and Badrinath Ki Dulhania.

Dhawan would be next in the upcoming movie Coolie No.1 which is an adaption of the 90s hit with the same name.

Estimated Price Per Movie: 5 to 10 Crores

Price per Endorsement: 3 crores per ad

Farhan is a fine Indian actor, director, playback singer, screenwriter, television host, and producer. He is the son of well-known screenwriter, Javed Akhtar.

Akhtar started his career as an assistant director in Lamhe. He made his directorial debut in 2001 with the movie-Dil Chahata Hai. Farhan made his debut in acting with The Fakir of Venice. However, it was his movie Rock On that gained him many accolades.

Estimated Price per Movie: 3 to 4 crores

The Indian actor-singer marked his debut with Vicky Donor and has been the recipient of many prestigious awards. He comes under the list of the most influential person in the world by Time Magazine.

People also love him for his hosting. Khurana is popular for his versatile acting which speaks volumes. His movies like Dum Laga Ke Haisha, Shubh Mangal Saavdhan, Bareilly Ki Barfi, and Article 15 testimony of the same.

Estimated Price Per Movie: 3 to 4 crores

Price Per Endorsement: 3 to 5 crores annually

Bollywood is the most celebrated industry in India. The kind of fame that our leading actors enjoy is not easy to get. It’s their pure hard work and zeal for acting that have earned them a reputation. Thanks to their Box office hits and the kind of roles they select, many of them, like Akshay Kumar, Salman Khan, and Shah Rukh Khan, conunts among the no 1 actor in Bollywood and also are the highest-paid actors in the Movie Industry. Besides earning from the movie, they also have an ad endorsement that increases their brand value per year.

According to Forbes, Akshay Kumar is the highest paid Bollywood actor in India.

Above is the list of the best Indian actors.