All You Need to Know about Fatty Acids & Its Foods 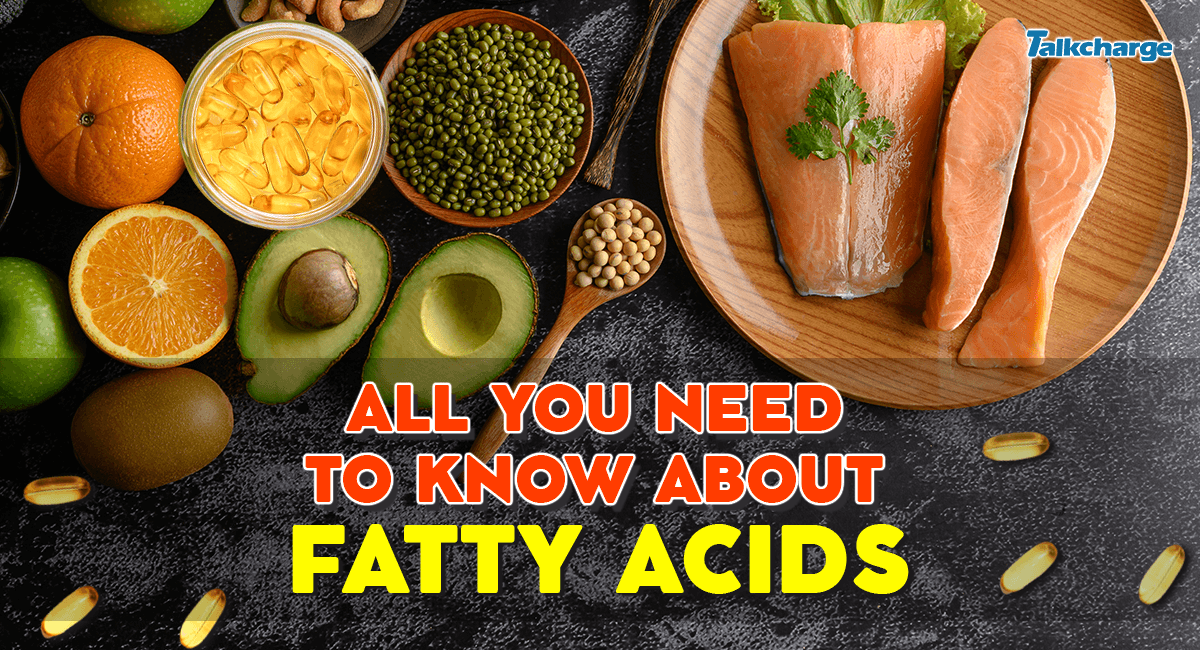 Fatty acids are some of the most important components that make up the human body, they have various functional, structural, and biological roles. Apart from their roles as being a source of energy, they also are the main constituents that make up the cellular membranes. In this context, as part of membrane phospholipids, they assure the membrane’s permeability, flexibility, and fluidity and passive transport through membranes. They are interconnected in an intracellular and intercellular way with other proteins.

The most important from these fatty acids are the PUFAs, the omega-3 and omega-6 polyunsaturated acids. This is because of the biological roles they have, such as presenting cardiovascular protection and neuroprotection, reduction of oxidative stress, and influencing the inflammatory cascade. In several diseases, it is seen that fatty acids get altered. This is why they are used in identifying potential biomarkers for some pathologies like PCOS, that is, polycystic ovary syndrome. This article will look into fatty acids in more detail as we read ahead.

What are Fatty Acids?

Lipids are the fat-soluble components of living cells, and an important component of those are fatty acids found in microorganisms, animals, and plants. A fatty acid consists of a straight chain that is made up of carbon atoms, and there along the length of that chain, there is a carboxyl group (―COOH) on one end and hydrogen atoms on the other. The acid is saturated with carbon-to-carbon bonds which are all single. The acid is unsaturated and more reactive when the bonds are double or triple.

Some fatty acids have branched chains, while others, like prostaglandins, have ring structures. These fatty acids exist in combination with glycerol, that is, alcohol, commonly, and this in the form of triglyceride and is not found in nature in a free state.

The most widely distributed fatty acids are palmitic and stearic acid and they are known as the 16- and 18-carbon fatty acids. Both of them occur in the lipids of most organisms. Regarding animals, palmitic acid makes up about 30% of their body fat, whereas it is about 5-5-% when it comes to vegetable fats, especially in palm oil. Stearic acid is abundant in shea butter, cocoa butter, and other vegetable oils, and it makes up a rather high proportion of the lipids found in the ruminant tallow.

Linoleic acid and alpha-linolenic acid are where omega-6 and omega-3 fatty acids are derived, respectively. These are needed by mammals conditionally and are formed from their parent fatty acids in the body but are not required for the maintenance of optimal development or health. Human babies are thought to have an essential need, though conditional, for the DHA that is docosahexaenoic acid, and this is derived from the alpha-linolenic acid, and also a possible need for the arachidonic acid that is derived from the linoleic acid.

There is a wide range of commercial applications regarding fatty acids. For example, fatty acids are used not only in producing food products but also in cosmetics, detergents, and soaps. The sodium and potassium salts of fatty acids are soaps, while skin-care products also contain these fatty acids that can also help in the maintenance of functional and healthy skin appearance. Omega-3 fatty acids are also sold in the market as dietary supplements.

Let’s talk about the fatty acid structure in this section. Stearic acid is a fatty acid, and phosphatidylcholine is a phospholipid, and both are composed of the chemical groups that form nonpolar ‘tails’ and polar ‘heads.’ The former is hydrophobic, meaning that they are insoluble in water while the latter are hydrophilic, meaning they are soluble in water.

The lipid molecules of this particular composition spontaneously form micelles, lipid bilayers, and other such aggregate structures. Here the hydrophobic ends are shielded from water, and the hydrophilic ends are water-oriented.

Fat is made from building blocks that are known as fatty acids. This is when it comes to the fat in our bodies and in our food. When you eat food with fat, your body will break it down into fatty acids.

In the previous section, we looked at the structure of these at the molecular level. But it is important to note that differences in the structure affect how these fatty acids behave. Here are the types of fatty acids:

The carbon chains of saturated spots do not have open spots for hydrogen atoms on the chain, and this is why this fatty acid is known as saturated fat. They raise the levels of bad cholesterol, that is the LDL cholesterol, and this increases the risk of getting heart disease.

There are two types of unsaturated fats:

One of the hydrogen atoms is missing in these fatty acids because of a double bond between carbon molecules. They are also known as MUFAs and are healthier fats.

More than one hydrogen atom is missing here, also called PUFAs. They have health benefits; for example, omega-3 and omega-6 fatty acids are a part of this group.

These are found in nature rarely but are common in processed foods. They are made when hydrogen molecules are added to unsaturated fats to become shelf-stable. These are unhealthy and are regulated for usage.

All fats are high in calories and should therefore be taken in sparingly. However, there is a recommendation of omega-3 and omega-6 for young adults and children. They should consume healthy food and a well-balanced diet that has unsaturated fats, and this is necessary for:

Here are some fatty acid foods that should be a part of our diet:

Docosahexaenoic (DHA) and eicosapentaenoic (EPA) are two of the omega-3 fatty acids and are called marine fatty acids as they are mostly found only in fish. The best sources of these are sardines, herrings, salmon, and others.

Alpha-linolenic acid (ALA) is an essential fatty acid whose recommended amount is from 0.5 to about 1.6 grams, depending on sex and age. When talking about one single tablespoon of flaxseed oil, it has over 7 grams of this. If you want this complete benefit, it has to be converted into DHA and EPA, something the body does not do efficiently. When compared to fatty fish, fatty fish is better than flaxseed oil

This is an oil that has high contents of monosaturated fatty acids, and this makes it an excellent dietary substitution for saturated fats that are unhealthier. Extra-virgin olive oil is better because it is minimally processed without heat or chemicals and is a part of the heart-healthy Mediterranean diet.

These tiny seeds are rich in omega-3 content and have fibre and protein. Unlike many other seeds, Chia seeds can release their nutrients without being crushed.

These nuts have both omega-3 as well as omega-6 fatty acids. One ounce of walnuts is about 2.5g of ALA that is twice the recommended average for daily intake. However, they should be consumed but moderately as they have 185 calories in one ounce.

This is another oil lower in saturated fats compared to other oils commonly used for cooking. One tablespoon of canola pol has a little more than 1 gram of ALA. While it is an oil that is highly processed, you can look for the cold-pressed version.

While it is a source of unsaturated fats, it is also available in a high-oleic version, making sunflower oil healthier when compared to olive oil. All types of this oil have more Vitamin E as compared to any other. This vitamin is an antioxidant and anti-inflammatory while also protecting the body from cognitive decline, cancer, cardiovascular diseases, etc.

Avocados are another great source of monounsaturated oil; they also have a whole range of other nutrients. They are a food that is high in calories as just half of it has around 161 calories.

Let’s talk about fatty acid metabolism. This consists of several metabolic processes that can be divided into:

One of the roles of these fatty acids in animal metabolism is the production of energy that is captured as ATP or adenosine triphosphate. Fatty acids also store fuels for a few plants and most animals.

1. What is saturated fatty acid?

The carbon chains of saturated spots do not have open spots for hydrogen atoms on the chain, and this is why they are known as saturated fat. They raise the levels of bad cholesterol, that is the LDL cholesterol, and this increases the risk of getting heart disease.

2. What is an unsaturated fatty acid?

3. Which fatty acid is good for health?