35+ Famous Bollywood Dialogues of All Time

All Posts / Entertainment / 35+ Famous Bollywood Dialogues of All Time 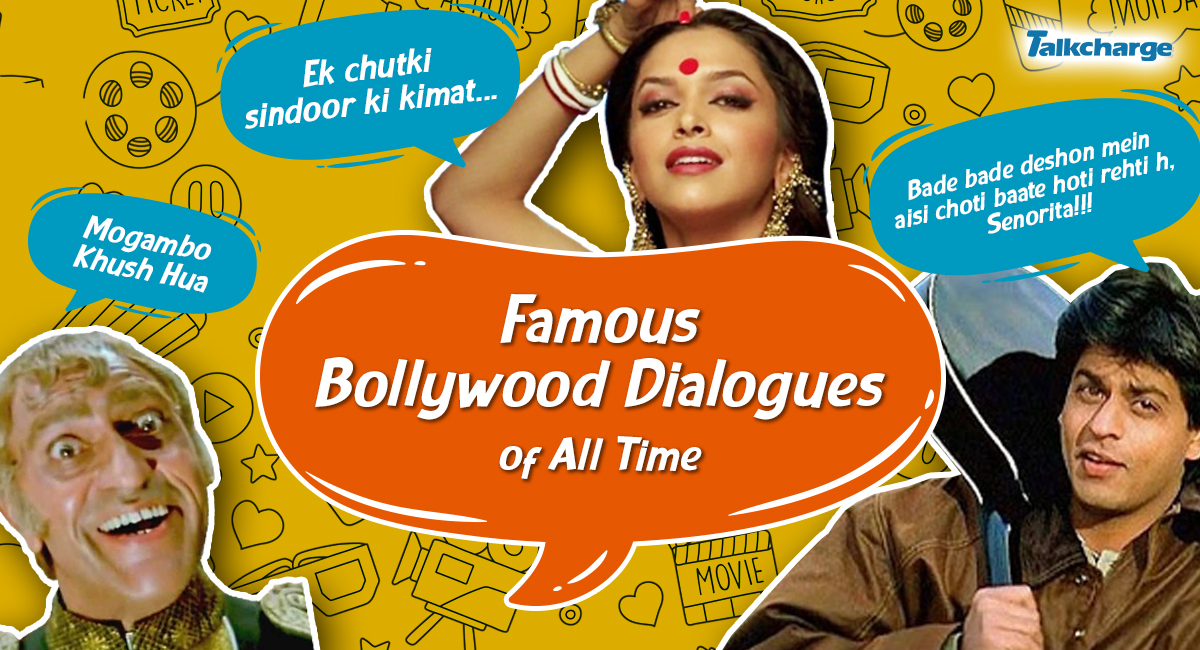 Bollywood is one of the biggest industries in the world. Hindi Cinema is synonymous with many famous Bollywood dialogues that have been itched in the public’s mind over the years. Talking of the dialogues, we cannot forget to thank celebrated writers like Javed Akhtar, Gulzar, Salim Khan, and many others to name who have penned down some of the finest dialogues.

This dialogue from cult classic Sholay has won many hearts. The dialogue has been part of many memes and has become popular Bollywood dialogues over the years.

We do not know about the Mogambo, but this dialogue has brought smiles to many faces. The classic dialogue is from the movie – Mr. India.

Shah Rukh starrer Dilwale Dulhania Le Jayenge broke many records! Special mention to this dialogue, which has become one of the famous Hindi dialogues. To your surprise, Aditya Chopra wanted to cast Tom Cruise in place of King Khan. Thank god he dropped the idea!

There is a reason why Amitabh Bachchan is known as the angry young man. The dialogue is from the iconic movie Shahensha. Not many know that the actual dialogue is ‘’Tumhare baap hote hai’’, but his fan knows it as ‘’Baap lagte hai’.

Late Rajesh Khanna was one of the Bollywood gems. The actor has delivered many famous dialogues, amongst all, this dialogue is most famous Bollywood dialogues that made him a superstar overnight.

This is another dialogue that has become synonymous with the first superstar, i.e., Rajesh Khanna. The dialogue is from the movie Anand. This statement has been inspirational for many.

7. I Can Talk English; I Can Walk English. I Can Run an English… Because English Is a Very Funny Language

You would surely not stop yourself from bursting with laughter after hearing this peppy dialogue. This is surely amongst the funniest Hindi dialogues of Bollywood actors.

Damini was one of the best Bollywood movies that has Sunny Deol in the main lead. This dialogue has been part of many memes on social media.

While this was one of the emotional dialogues from the movie Sholay; however, it has become one of the legendry dialogues. All thanks to Kadar Khan for penning this dialogue!

The veteran actor Shatrughan Sinha is known for his versatile acting. The dialogue is so popular that at times younger Sinha aka Sonakshi Sinha also uses the dialogue to make everyone Khamooosh.

This dialogue is from the Hindi movie Don that was released in the year 1978. The dialogue became so popular that the director Farhan Akhtar had to add this dialogue in the movie’s remake, which had Shah Rukh Khan in the lead.

This dialogue is amongst the top dialogues of the Hindi cinema. The dialogue originally belongs to Dilip Kumar’s starrer Devdas, seeing the immense popularity of this dialogue, it was kept in 2002 released Devdas as well.

The megastar has created some of the iconic characters of Bollywood, including Jay from the movie Sholay. This legendry dialogue has made his character timeless.

This is undoubtedly amongst the best quotes from the most romantic Bollywood movie-Pakeezah. The movie and this dialogue is deeply embedded in our consciousness.

This is yet another most famous dialogue from the cult classic-Sholay. If you are a Bellwood lover, you would vividly remember the scene in which this dialogue was said.

Sunny Deol is best known for mouthing this iconic dialogue. Over the years, this dialogue has imprinted in our minds and heart.

Both Rahul and Anjali from the movie Kuch Kuch Hota Hai wouldn’t have known that this dialogue would become so famous, that boyfriends use this dialogue to tease their girlfriends.

This is undoubtedly one of the famous motivational dialogues delivered by King Khan. Not many know that Baazigar was the first movie that got Mr. Khan his first Filmfare.

Here is a small fun fact, the king of Bollywood –Shah Rukh Khan, has had Rahul name in 8 movies. The name is synonymous with a fanatical lover who would do anything for his lady love.

This iconic dialogue needs no introduction! The dialogue became so famous that it was used in different situations. Talking about the movie Karan Arjun, it remains one of the best movies of Bollywood.

‘Go Simran, go and live your life ‘’ is one of the most popular Bollywood dialogues. DDLJ is a cult classic for a reason!

The Bhaijaan of Bollywood surely knows how to woe his audience. Not only the movie- Wanted, this quintessential dialogue has also become memorable.

3 Idiots was one of the highest-grossing Bollywood movies, and its dialogue All is Well has comforted many during the hard times.

This is yet another inspirational Bollywood dialogue from 2007 released Om Shanti Om. The dialogue has garnered a special fan base in the last decade.

This is one of the most remarkable Bollywood dialogues from the movie Om Shanti Om. There would hardly any girl who has not mimicked the dialogue in the real world. Kuddos to Deepika Padukone for pulling this dialogue so well!

This was Sonakshi Sinha’s first dialogue that caught many fancies. The actress received many accolades, including Filmfare Award for Best Female Debut for her movie Dabangg.

There would be hardly anyone who hasn’t tried these famous Bollywood dialogues. This popular dialogue is from SRK’s movie- My Name is Khan. And, surely he wasn’t a terrorist!

What would you say to your friend whom you find incapable of doing a certain task? Obviously, Beta Tumse Naa ho payega! Undoubtedly, this is one of the most used Bollywood dialogues. The dialogue became famous from Anurag Kashyap’s Gangs of Wasseypur 2.

The celebrated Bollywood actor- Paresh Rawal is best known for his comic timings. The dialogue is from everyone’s favourite Bollywood comedy – Hera Pheri. Everyone has their style of saying this dialogue, but no one can match up to Babu Rao.

Though Salman Khan Starrer Race 3 could not do wonders at the Box office, but this dialogue of Daisy Shah became popular amongst the audiance. Even before the release of the movie, the dialogue has been used in different situations. Not to forget, this too has been part of many memes.

Shahid Kapoor is one of the highest-paid Bollywood actors in India and has some of the best dialogues of Bollywood movies to his credit, like this one from the film Padmaavat.

This hard-hitting dialogue from the movie Raazi left everyone speechless because nothing is more valuable than the country! The dialogue speaks volume, and so does Alia Bhatt’s acting in the film.

Like literally!! The movie – Sonu Ke Titu Ki Sweety itself proves the dialogue wrong! But this is one of the all-time favorite Bollywood dialogues.

Pink movie gave many socially relevant messages for society. This particular dialogue emphasizes the literal meaning of NO. No means no. It shouldn’t be understood as a YES from a girl.

This is indeed one of the trending Bollywood dialogues from the movie Love Aaj Kal 2020. The dialogue was part of many memes. Like the dialogue, Sara Ali Khan’s acting in the scene raised many eyebrows.

The movie-URI is based on the real 2019 Pulwama attack that shook the nation. How’s the Josh is not a line but an emotion for many. This dialogue is etched in the minds of Bollywood lovers for years to come.

The Dirty Picture was loosely inspired by the real-life of the actress Silk Samita. Like the movie, this dialogue too became popular.

This is not just a dialogue but a truth of life! This dialogue from Ranbir Kapoor and Dipika Padukone’s movie – Yeh Jawaani Hai Deewani, has its own fan base.

The first thing that comes in our mind while talking about Hindi Cinema is the famous Bollywood dialogues that have been written by the ace writers of Bollywood. Most of the Hindi industry actors are known for their heavy-duty dialogues that have given them star-like status over the years.