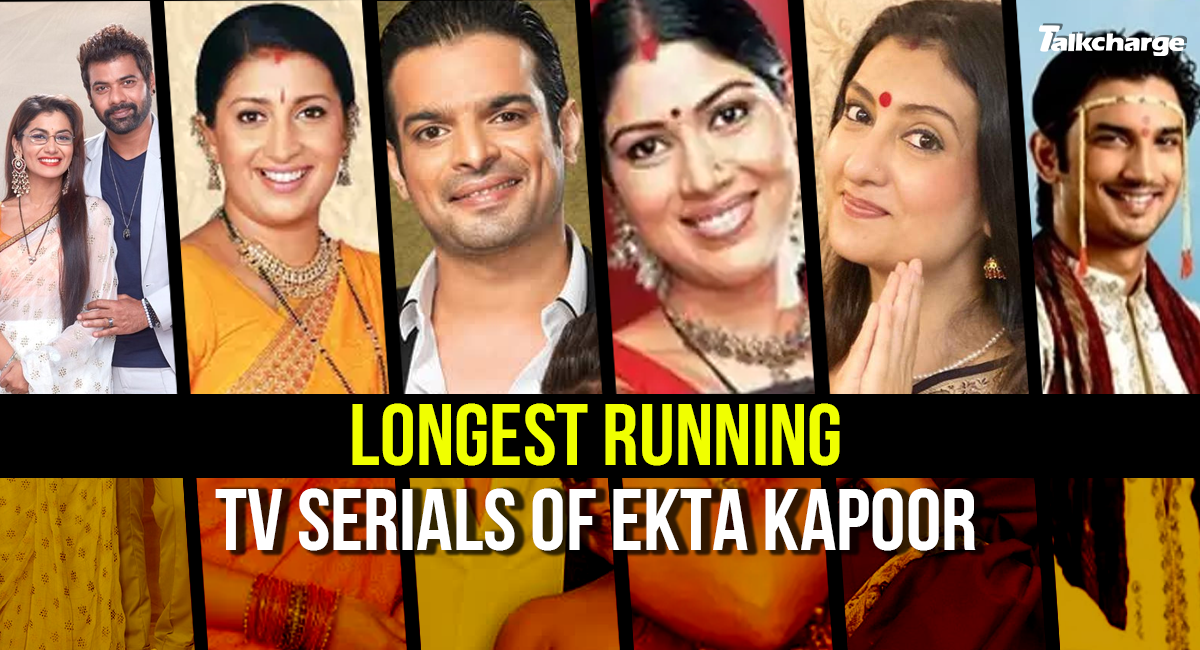 Revered as TV czarina, Ekta Kapoor brought a revolution to the TV landscape with her TV shows. She has produced more than 130 serials under her banner Balaji Telefilms Limited. The soap opera queen started her career with the thriller TV series Mano Ya Na Mano. In 2000, Ekta launched several serials, starting with the ‘K ‘ letter. Her first series with K was Kyunki Saas Bhi Kabhi Bahu Thi, her first soap opera. The producer-cum-director-cum- content creator Ekta Kapoor started her journey in 1994 at the age of 17. Ekta Kapoor TV shows primarily target Indian housewives, but over the years, she has created a wide range of content for all age groups.

Owing to her illustrious work in the TV industry, she has been awarded many accolades, including Best Entrepreneur of the Year, the Indian Television Academy Awards, Indian Telly Awards, Kalakar Awards, Asian Television Awards, and many others, to name. In 2020, she was facilitated with Padma Shri. Besides Hindi, she has helmed regional serials. Let’s have a look at Ekta Kapoor serials names that have crossed the milestone of 1000 episodes.

This popular Ekta Kapoor serial tells the story of Priya Sharma and Ram Kapoor, whose characters were played by Sakshi Tanwar and Ram Kapoor, respectively. The pair, by default, got married and fell in love with each other after tying knots. The story moves ahead when there comes a leap of five years in the serial. In June 2012, numerous new actors and roles like Amrita Mukherjee and Samir Kochhar were introduced. The audience really liked the adorable performance of Pihu, whose role was played by Amrita Mukherjee. The serial’s sequel also came up in 2021 with the Name Bade Achhe Lagte Hain 2. The main leads of this epic soap opera are currently performed by Nakuul Mehta and Disha Parmar.

This Supernatural and fantasy thriller Ekta Kapoor serial is one of the top-rated serials running on Indian Television. The serial has been telecasted for six seasons; its latest one, Season 6, is telecasted currently. The plot of Naagin Season 6 revolves around the 2020 pandemic that brings a lot of sufferings to people all over the globe. This time, Shesh Naagin, the Queen of all Serpents, has been called upon to save the lives of millions of people. Naagin’s earlier seasons are also popular and have won the hearts of its viewers. Some of its most acclaimed characters are Mouni Roy, Arjun Bijlani, Adaa Khan, Karanvir Bohra, Surbhi Jyoti, Pearl V Puri, and Anita Hassanandani, Nia Sharma, Vijayendra Kumeria, Rashami Desai, Surbhi Chandna and a lot more.

The storyline of this serial tells about a straightforward and sweet girl who got hitched to an affluent personality who does not believe in destiny. Her heart got broken when she came to know that their fusion was only a betrayal by their families.

This renowned Ekta Kapoor serial story revolves around a love story between Rudraksha Kurana and Dr. Preesha Srinivisan, who are popular rockstar and Gynaecologist, respectively. The couple fell in love after nurturing their sibling’s son together.

Produced by Ekta Kapoor under Balaji Telefilms, Kumkum Bhagya is currently the longest-running show. With Shabir Ahluwalia as Abhi and Sriti Jha as Pragya in lead roles, Kumkum Bhagya is one of the most popular Hindi TV shows of Zee TV. The duo is receiving immense love from all quarters for their portrayal. Since its release, the TV series has managed to top the TRP charts.

In the Ekta Kapoor all serials name list, the show Kyunki Saas Bhi Kabhi Bahu Thi hits the top position. There would be hardly any 90’s kid who would not remember the title track of the show ‘Rishton Ke Bhi Roop Badalte Hain. Set in Gujarat, Kyunki was the first Saas Bahu drama that received love and was amongst the list of very first Ekta Kapoor serials whose title started from K. The show highlighted the significance of extended family.

The show recently completed 21 years. Though the show went off the air in 2008, its characters like Tulsi, Mihir Virani, Gautam, and Karan Virani are still etched in the hearts of its audience.

Here is a fun fact about the show. The serial was originally titled Amma, it was later re-titled as Saas Bhi Kabhi Bahu Thi, and ‘Kyunki’ was added later, owing to Ekta’s love for the ‘K’ letter.

It’s been more than two years since the show ended. However, we still can’t get over the camaraderie shared by Jhansi ki Raani (Ishita) and Rawan Kumar (Raman), the lead characters of the Starplus serial Ye Hai Mohabbatein.  It was one of the longest-running TV serials of Ekta Kapoor as it completed 1895 episodes. The show was based on Manju Kapur’s 2011 novel Custody.

Kahaani Ghar Ghar Kii is yet another one of the most popular serials of soap opera queen Ekta Kapoor. Like Kyunki, it too became the flagship of Star Plus. Parvati Om Agarwal and Om Agarwal, played by Sakshi Tanwar and Kiran Karmarkar, respectively, are the most revered characters on television. The TV series came to an end in 2008 with1661 episodes and became one of the longest-running shows on Star Plus.

Besides the Hindi TV industry, Ekta Kapoor has also forayed into regional TV serials. The Kannad serial, Kadambari, is her longest-running show. The show aired on Udaya TV. It was based on the different struggles of different women.

The show hooked us from the first episode, and Kumkum (Juhi Parmar) and Sumit (Hussain Kuwajerwala) become the epitome of love. With more than 1400 episodes, the show entered the list of longest-running shows. It ranked at the top of TRP charts and is believed to be one of the top-rated Ekta Kapoor TV shows list.

Starting in 2009, Pavitra Rishta was produced by Ekta Kapoor and aired on Zee TV. It is one of the most popular serials of Ekta Kapoor. Not many know that the show was initially adopted from the Tamil serial Thirumathi Selvam on Sun TV. The show gave us two iconic characters, Archana and Manav, played by Ankita Lokhande and Sushant Singh Rajput / Hiten Tejwani. After the death of actor Sushant Singh Rajput, the serial was rebroadcasted on Zee TV and received good ratings. Owing to its popularity, Ekta has produced its new season, which has Ankita Lokhande and Shaheer Sheikh in key roles.

Kasautii Zindagii Kay was one of the longest-running Ekta Kapoor serials telecasted on Star Plus. The show enjoys classic cult status with iconic characters like Mr. Bajajaj, Komolika, Prerna, and Anurag. In 2018, the show came back with a new season with an all-new star cast. However, it could not beat the craze that the original version enjoyed.

Next on our list of Longest-running Ekta Kapoor serials is Kundali Bhagya. The TV series is a spin-off of Kumkum Bhagya. The show has grabbed eyeballs for its well-sketched characters, especially Dr. Preeta Karan Luthra, Dheeraj Dhoopar, and Manit Joura, essayed by Shraddha Arya, Dheeraj Dhoopar, and Manit Joura, respectively. Tune in to Zee TV at 9:30 to know the latest episodes. You can also watch it on Zee5.

Sony TV serial Kkusum revolved around its titular character, Kkusum, who faced many tribulations in her life. The show topped the TRP charts and received immense love for its characters and storyline. The soap opera concluded with its 1001st episode and bagged the title of one of the longest-running Ekta Kapoor serials. Owing to the love the original series received, the show is remade in Marathi as Tumchya Amchyatali Kusum by Ekta Kapoor and is telecasted on Sony Marathi.

Produced by Ekta Kapoor and Shobha Kapoor, the story of this serial tells about Kunal Chopra, who has lost his zeal for life due to his failures. The fallen hero is living an unenthusiastic life, but his life takes a turn when he encounters true love in his wife, Siddhi Chopra. Due to his wife’s support, the begins to follow his ambitions and gets a new direction in his life.

Ekta Kapoor needs no introduction! The soap opera queen has been ruling the TV industry for the longest. Her serials like Kyunki Saas Bhi Kabhi Bahu Thi, Kumkum Bhagya, and Kahaani Ghar Ghar Kii have garnered immense love over the years.

1. How many serials are produced by Ekta Kapoor?

2. Why Ekta Kapoor is famous?

Ekta Kapoor is famous for her soap operas that initially started with the K letter.

3. Which was the first serial of Balaji Telefilms?

Mano Ya Na Mano and Hum Paanch are amongst Ekta Kapoor first serials that aired on Zee TV in 1995.

4. What is the name of the currently running shows of Ekta Kapoor?

5. What are the names of Ekta Kapoor latest serials?

Ayurvedic Treatment for Piles
Useful Rakhi Gifts for Sister Under 500