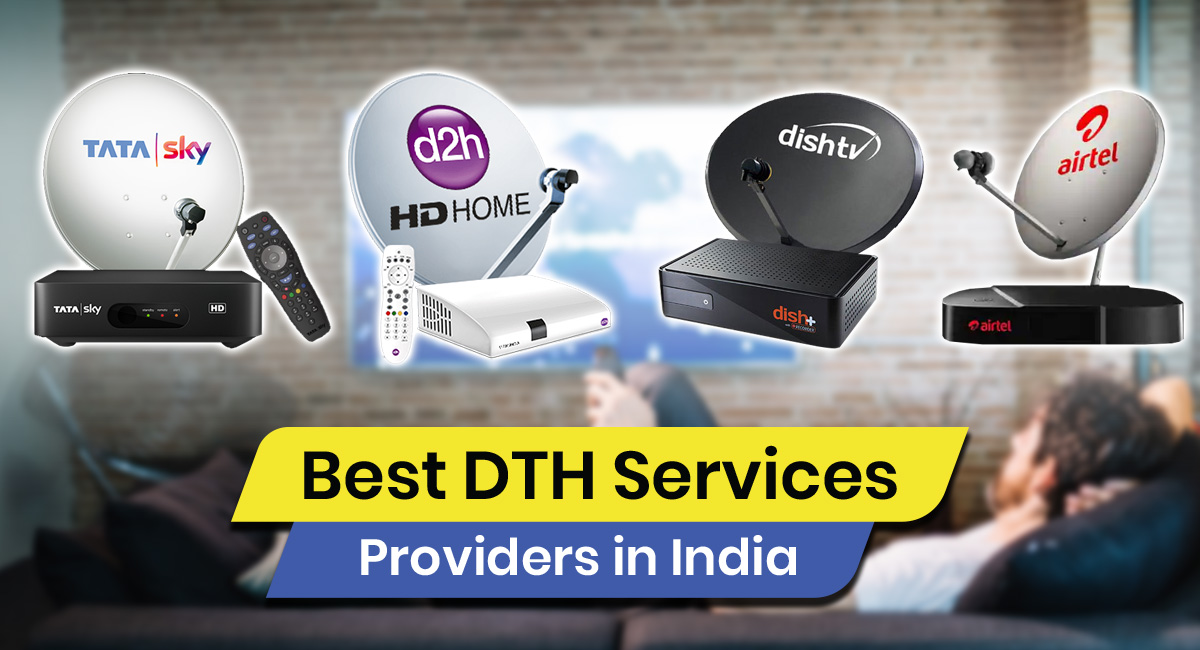 The invention of the television was an integral part of the country since it allowed the masses to access what’s happening around, at the comfort of their home. In the prime years, the Doordarshan channel was the only source of entertainment. The channel premiered all types of serials and news in different channels and movies. Giving tough competition to Doordarshan, private channels came up with a varied range of content and soap operas that shifted mass preferences to cable TV. And soon, TV invaded every household’s privacy as every home has a TV. Instead, every room has a TV. To make your experience even better, Dish TV introduced the first of its DTH concept in the country.

DTH refers to the reception of the satellite signals on the television with a personal dish. Today there are top 8 DTH service providers in India that offer the best of the DTH services.

Launched in the year 2008 by Bharti Airtel, it is one of the best DTH service providers in India. Airtel Digital TV now offers about 400 channels, which is why more than a million users subscribe to it. It covers a wide range of categories of channels, including Education, Lifestyle, Movies, Entertainment, Sports, Kids, News, and more. Apart from the National and International channels, it provides plenty of Regional language channels. You can even record your programs with Airtel Digital TV and watch them later, and you can also get multiple connections with a single dish. If you have more than one TV at your home and want to get Airtel Dish TV connection for all of them, you can take multiple connection facilities and customized Airtel Digital TV Recharge packages.

Dish TV is a venture of Zee TV, one of the most popular channels across India. Although it is one of the oldest, it has been upgraded over the years with the latest advancements. It is still leading the market due to the high quality that it maintains and the availability of a wide range of channels which attracts a large number of people. The cost of subscribing to Dish TV is still the lowest in the market, and those who want to experience the best at the most economical rates can opt for Dish TV. Bachelors living away from home or people who want to save more can subscribe to this DTH service in India. It has features like Games, Interactive TV, Child Lock, and comes with a vast number of Regional, Hindi and English channels. The combo packs and Dish TV Recharges

It was launched in the year 2008 as one of the subsidiaries of Reliance Communications. Earlier, it was named Reliance Big TV, but later on, it was renamed Reliance Digital TV. Their services are also offered in PAN India. The spectrum of channels that they cover includes categories like Music, Lifestyle, Sports, Entertainment, Movies, News, and many more. And besides such a fantastic collection of channels, they also have extra features such as free internet games, pay per view movies, etc. They have updated their services as per the latest technologies, and you will never get anything less than a premium viewing experience. The picture quality is crystal clear convoyed by an outstanding sound system and gives you a feeling like you are watching something in a theatre. The best part is that the Reliance Digital TV Recharges packages are very attractive and will allow you to get more for less money. Owing to all its beneficial services, Reliance Digital TV has become one of the top-rated DTH service providers in India.

Being the second player at the time of its launch in the year 2006, Tata Sky overtook the market quickly and gained the position as one of the top DTH brands in India today. It is a joint venture of Tata Group and 20th Century Fox.

Earlier, it started with usual channels, and then when HD hit the market, they added a vast number of HD channels in their list. With the addition of the latest technology, their customer base boosted, and now it has become leading DTH service providers in India. Tata Sky has embraced the latest technologies by launching the newest and relevant products. And yes, how we can forget that Tata Sky was the first DTH service to live telecast the FIFA World Cup in the year 2014 in 4K UHD. It also provides exclusive content like learning opportunities for the kids through channels related to cooking, dancing, music, and more. And not to forget it has all your favorite sports channels as well. The price of Tata Sky Recharges and packs are very competitive and will save your money for sure.

An utterly amazing and wide assortment of different channels is the primary factor that makes Videocon D2H the best choice for all. The selection of Standard Definition (SD) and High Definition (HD) channels is worth having when you can enjoy clear pictures and incredible sound quality with MPEG-4 technology. The Videocon D2H Recharge packages are very cost-effective. With an add-on package, the entire family, including kids, teenagers, adults, and seniors, can enjoy their choices, making it one of the top DTH service providers in India. On a long-term subscription, you will get huge discounts, and that’s why Videocon D2H is good to go.

This DTH service is available in entire South India and focuses majorly on the South Indian channels. Although the mainstream Hindi and English channels are available, a majority of the channels are South Indian. It was launched in the year 2007 by Sun network (Chennai based DTH service). You can find a large number of Sun Direct DTH customers in South India, but in the country, its presence is small. For amazing Sun Direct Recharge offers, you can visit TalkCharge.

Introduced in the year 2004, DD Direct Plus is a free satellite television provider in the country. Also, known as DD Free Dish, DD Direct Plus is owned by the Doordarshan. The DTH service provider is ruling more than 30 million households currently. It provides access to all the Doordarshan channels. Adding to that, users can access their favorite sports channels, watch movies, and serials. DD Direct plus also boasts private channels like B4U movies, 9XM, BU Music, and Zing. The service provider is a retreat for all the art lovers as they would all the cultural channels at a modest price.

In the year 2000, Dish TV introduced the concept of DTH – Direct to home in the country and is one of the first DTH providers in India. Soon other brands followed its path, and today, India has the top 8 DTH service providers that are known for their impeccable services that too at an economical price. Moreover, users also get the best of the channel’s plans, allowing them to select the most favorable plan for their home and office.

Most Handsome Men in the World Alive: 2022 List
12 Best Health Insurance Plans in India to secure your family (2022)