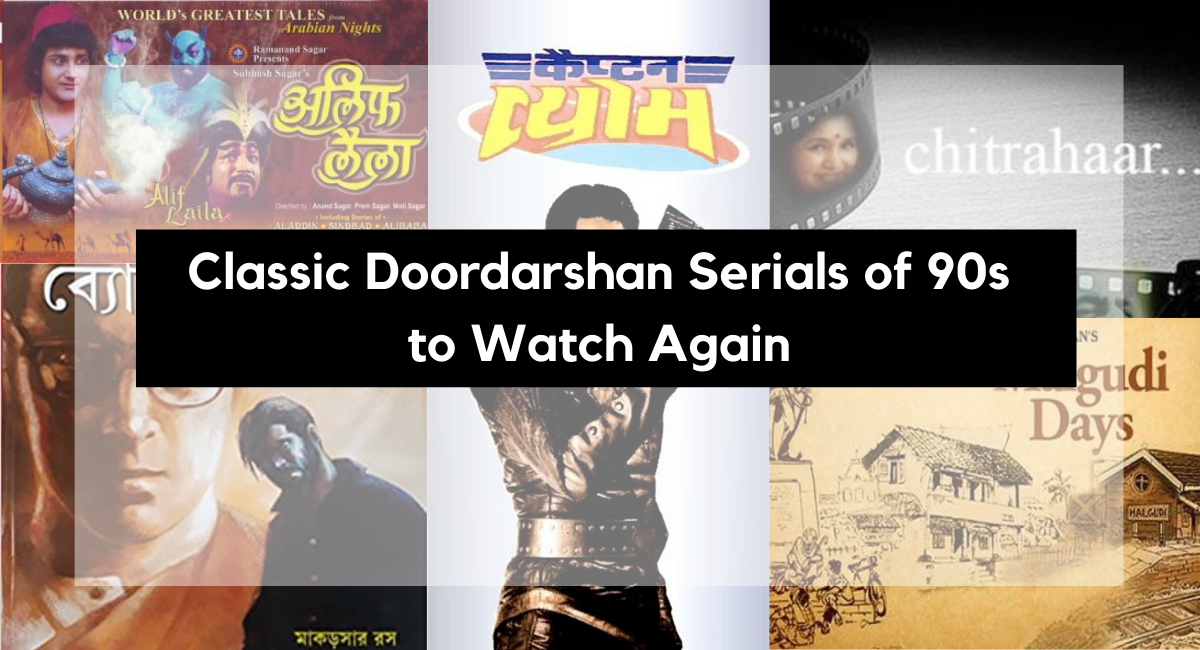 If you are a 90s kid, then you surely know what today’s generation is missing. The 90s had some of the best TV series. Back then, cable TV was not introduced; the only channel we had was Doordarshan.

The channel broadcasted an array of serials that focused on different genres like mythology, comedy, soap opera, and many others.

Some of the top-rated TV series like Shaktiman and Mahabharat were rerun during the lockdown. And, to everyone’s surprise, the TV series broke all the records. They were the most watched serials around the globe.

Owing to their popularity and fan base, TV serials like Tu Tu Main Main and Shriman and Shrimati were remade on the same storyline with the extended or new star cast and got the same love.

While there was no single serial that did not leave a significant impact on us. However, there are a few that need to be watched over again.

Here we have curated classic Doordarshan serials of 90s that one should definitely watch.

First, on the list of DD National old serials list is Malgudi Days. The TV series was primarily telecasted in Hindi and then was telecasted in English. The acclaimed cartoonist – R. K. Laxman sketched the story. The TV series was inspired by the short story collection of R.K. Narayan that had the same name. The series was remade in the year 2006 and was directed by Kavitha Lankesh. You can watch all episodes of this TV series on Hotstar.

Byomkesh Bakshi was the first of its kind Hindi Television serial based on the real-life of the detective -Byomkesh Bakshi. Undoubtedly, it has to be in our Classic Doordarshan Serials 90s List. It was the most acclaimed and celebrated adaption that was telecasted on DD National. The show was re-telecasted on the same channel during the lockdown.

Shaktiman was one of the first TV series based on the Super Hero in India. The show was unique in its ways -as, at the end of the episode, it taught moral values to the kids, which also became the USP of the show. While there are a number of Superhero based TV series but no one could create the same magic. We miss you, Shaktiman! You can binge-watch the episodes of this old DD National serial on Amazon Prime as well.

Flop Show was a distinctive show that aired at the beginning of the 90s. Though the comedy show had only ten episodes, all the episodes have had a major impact. You can still watch videos on YouTube. The show’s USPs were its distinguished opening sequence and jokes that played in between the casting credits and popular Hindi songs that played at the end in the form of parody. During the pandemic, this one of the oldest 90s Doordarshan serials was telecasted on DD National in 2020.

Directed By: B. R. Chopra and Ravi Chopra

This was the first of its kind mythological TV series that hooked many to the TV. During the late ’80s, hardly a few houses had Television. The houses which had television became the hub for the TV watchers, especially for Mahabharat fans. Post the original Mahabharat, there are many channels like Star Plus that came up with same stories. However, the original series had its charm and sentiments. No doubt, it comes in the top-rated category of Doordarshan serials 90s list, and you can even enjoy the episodes of this mythological series on Zee5.

The old Hindi serials of 90s are incomplete without the mythological show Shree Krishna. This serial was based on Lord Krishna’s life. It was written, directed, and created by Ramanand Sagar. The series aired weekly on the Doordarshan. The TV series was applauded for its screenplay and powerful performance given by each actor. During the Covid-19 lockdown period, the serial was again aired from 3 May 2020 to 16 December 2020.

The mini Crime drama series featured two private detectives Gopichand and Sam D’Silva, who solves a new criminal case in every episode. The show has some of the best Tellywood actors like Saurabh Shukla and Supriya Karnik.

Doordarshan Serials 90s list cannot be completed without this family drama. The TV series was aired in the Doordarshan is one of the favorite TV serials of millennial. While most of the TV Shows talked about Saas Bahu saga, this show highlighted the perks of living in a joint family. The cheerful family has had their share of struggle, but that did not reduce their cheerfulness.

This popular Hindi sitcom is a part of the Doordarshan Serials List of 90s. The TV series was loosely inspired by the English TV series- Love thy Neighbour. The show had Charismatic veteran actors like Rakesh Bedi, Reema Lagoo, Archana Puran Singh, and Jatin Kanakia.

Who can forget the powerful dialogue delivery of Koki, Dilruba, and Premaji. We definitely can’t get over the serial and wish it could be remade with the same star cast.

Next in DD National old serials list is Captain Vyom. It was the first TV series that showcased life in 2123 when humans will conquer the solar system and establish space stations on different planets. The story of the show focused on Captain Vyom-Milind Soman, who happens to be a super-soldier.

Regarding the old serials from 1990 to 2000, one can’t miss the famous show Tu Tu Main Main. This famous sitcom was all about the banter between mother-in-law and her daughter-in-law. It was telecasted on the DD Metro from the year 1994 to 1996, and then it aired on the Star Plus channel. Owing to its popularity, the show was dubbed in different languages like Tamil. In the later years, the show made a comeback with the extended star cast and received the same love. Do watch it on online platforms if you have not watched it.

It was the first show of Shah Rukh Khan who is now one of the highest paid Bollywood actors in India. This has to be in the Doordarshan serials List of 90s; we wish we could see more TV series. The TV series was re-telecasted on the Doordarshan during the lockdown. What if Fauji is remade? It would be one of the most-watched TV shows, but it has to have the king of romance.

Talking about the Doordarshan old serials list, how can we not add Alif Laila. The fantasy show was the true narration from the Arabian nights. It had a collection of stories with fascinating characters, morals, flying carpets, fairies, and lamps. If you are a 90s kid, then you must have watched this serial.

Remember Jungle Jungle Pata Chala Hai Chaddi pehen Ke Phool Khila hai? Who can forget the opening song of the TV show. The lyrics of the song were given by Gulzar. The show aired in many countries with different names. In India, it became popular amongst kids. The show featured a cub- man who was raised by a group of animals.

Classic Doordarshan Serials 90s list is incomplete without Mungerilal Ke Haseen Sapne. The TV series revolved around Mungerilal, who was bossed by his wife at home and dictated by his boss in the office.

On top of it, his father in law boasted his achievements. In order to escape from the real world, Mungerilal used daydreams. The show was inspirational and one of the best comedies of the 90s.

It is one of the oldest Television programs that feature on DD. The show has a compilation of the songs. It still airs on Wednesday for half an hour. It is amongst the most-watched TV programs in the 80s and 90s. The show is still aired on the same channels with the subtitles.

Wish we all had a Hindi teacher like Mohan Bharti. The show’s cast had popular faces from the TV industry that includes Pankaj Kapur, Rajendra Mehra, Shobha Khote, and many more to list. The sitcom was inspired by the English show Mind Your Language that aired in the year 1977. This classic has a huge fan base even today as well.

The show focused on the detective Raja and his assistant Rancho, who was a monkey. They both solved a new case in each episode with their smartness and sharp mind. The show was also telecasted on DD Metro in later years.

We cannot miss Swabhiman in the Classic Doordarshan Serials List of 90s because of the huge fan base the TV series had back then. The Indian Soap opera revolved around a young and beautiful girl Svetlana. The show was directed by the ace Bollywood director Mahesh Bhatt and penned by the renowned columnist and novelist Shoba De.

The Indian drama series was co-produced by Ekta Kapoor under Balaji Telefilms. The series centers- a princess-Ambika who seeks justice for his husband’s death. The cult drama was one of the famous 90s shows that telecasted on Doordarshan. After fighting with all the ordeals, she succeeds in getting justice. The show was broadcasted for two long years and earned a huge fan following.

While 80s had serious shows like Buniyad Hum Log, 90s brought a revolution on the Doordarshan channel. During 90s, shows from all the genres like comedy, mythology, family drama, adventures were aired on the channel. If you haven’t watch serials like Shaktiman, Flop Show, and many listed above, you have surely missed the best of the old 90s serials that were aired on Doordarshan. It’s never too late, you can still watch these serials on the online platform, and those who have already watched them can binge-watch them again until they get over it.

1. Where can I get old Doordarshan serials?

You can watch all the old Doordarshan serials on online platforms like YouTube, Amazon Prime, and Zee5. You can also buy original CDs and DVDs of the TV series.

2. Which Doordarshan programmes are broadcasted?

Mahabharat, Byomkesh Bakshi, and Tu Tota Main Maina are few TV series from the ’90s that are still broadcasted on the channel.

3. Which is the new channel started by Doordarshan?

DD Arunprabha is the new channel that is started by Doordarshan in 2019.

4. Which programs are still popular in the Doordarshan serials from 1990 to 2000?

Some of the acclaimed shows falling on the top of the 90s Doordarshan serials list are Malgudi Days, Alif Laila, Byomkesh Bakshi, Shakitman, Shree Krishna, Dekh Bhai Dekh, and a lot more.