15 Celebrated Bollywood Comedians Who Never Fail to Make us Laugh 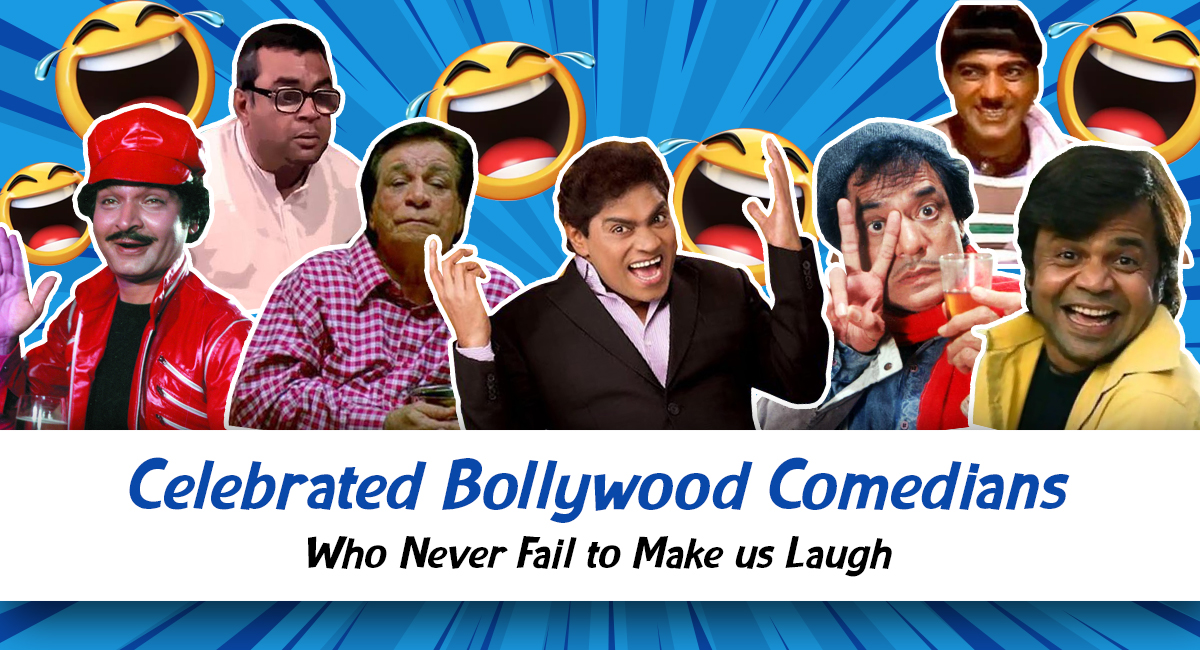 The Hindi Cinema industry has some amazing Bollywood comedians who have left no stones to make us laugh. These Hindi movie comedians have not only tickled our funny bones but have also graced Indian cinema with their fine acting. Starting from the veteran actor Johnny Walker who worked hard in the comic genre to give comedians their dues in the movie industry, following his footsteps, today we have several Bollywood comedy actors like Raj Pal Yadav, Akshay Kumar, and many more to add in the list who are gracing the silver screen. In this blog, we have listed the top 15 comedy actors’ names that have made us laugh through their natural performances.

The ace Bollywood comedian was also a successful producer, director, and singer. The actor worked in more than 300 Bollywood movies and has received 25 nominations for Filmfare awards in the category, amongst which 19 for Best Performance in Comic Role. The actor knew the art of tickling the funny bones of his audience very well. He has been a part of comedy movies like Padosan, Bombay to Goa, and Andaz Apna Apna. The actor slept to death on 23 July 2004.

Johnny Walker was a legendry Bollywood comedian who could turn even a serious scene into the funniest scene. To your surprise, his real name is Badruddin Jamaluddin Kazi, and it was Guru Dutt who changed his name to Johnny Walker. His movies like Pyaasa, Mere Mehboob, and Chori Chori gave him a star-like status in Bollywood. He was awarded Filmfare Best Comedian Award for his portrayal in the movie Shikar. No doubt, in the old Bollywood comedians list, he stands at one of the top positions.

If we are talking about Hindi comedy actors’ names, how can we forget Asrani? The legendary Bollywood comedian has been part of more than 300 movies. He got famous as a comedian through movies like Aaj Ki Taaza Khabar, Chupke Chupke, Heeralal Pannalal, Pati Patni Aur Who, Dhamaal, Malamaal Weekly. His Jailor’s role in the movie Sholay made him famous. Who can forget his dialogue ”Hum angrejo ke jamane ke jailer hai’’.

There would be hardly anyone who does not know Johnny Lever as he is one of the top-rated 90s comedy Bollywood actor. The comedian has made us laugh in over 200 movies. The actor has won 2 Filmfare awards for comedy roles in the movies like Deewana Mastana and Dulhe Raja. He started as a stand-up comedian and today has become one of the funny Bollywood actors in the country. He is one of the significant Bollywood comedians in the film industry.

While many of you might know him as the angry father, all thanks to his stern character. But, he is best known as the top comedy actor in Bollywood. The versatile actor has made his audience rolling the aisles with his roles in movies like “Mr. & Mrs. Khiladi”, “Dulhe Raja”. Not many know that khan has also penned down many Bollywood dialogues.

His first comedy movie was Himmatwala. The actor ruled the comedy industry in the ’80s and ’90s.

Govinda became popular for his slapstick performances and dancing skills. He is one of the best Bollywood comedy actors. The actor stepped into acting with his movie Ilzaam in 1986; however, his comedy movies gave him star-like status. The Bollywood comedian has given iconic performances in comedy movies like Raja Babu, Coolie No. 1, Hero No, Dulhe Raja, Anari No.1, and Haseena Maan Jayegi.

Shakti Kapoor is a versatile actor known as a Hindi comedy actor and villain of Bollywood. Whether Balma from Chalbaaz or Nandu from Raja Babu, his characters have been loved immensely by the audience. He is also one of the famous mimicry artists & one of the famous ones in Bollywood comedians’ names because of the wide number of roles he has opted to play on the silver screen. His funny dialogues like ‘’Main Hu Nandu Sab ka Bandhu’’, ‘’ aankhen nikal ke gotiya khelunga” have made us laugh over the years.

Next on the list of best Bollywood comedians is Raj Pal Yadav. The iconic comedian has made us laugh in his movies like Pyaar Tune Kya Kiya, Hungama, Waqt: The Race Against Time, Chupke ChupKe, Phir Hera Pheri, and Garam Masala with his remarkable acting.

How can we not add Paresh Rawal, aka Babu Bhaiya, to the list of famous Bollywood comedians names? The actor has played numerous noteworthy comic characters on the silver screen. Baburao from the movie Hera Pheri became instantly famous. The actor is also remembered for his stress-busters roles in movies like Chachi 420, Nayak, Awara Paagal Deewana ), Hungama, Golmaal: Fun Unlimited, Welcome, and Welcome Back.

The Hindi film comedian names list is incomplete without the versatile actor Akshay Kumar. He is one of the highest-paid actors in Bollywood. The ace actor has donned many roles and has gained immense popularity in each genre. Khiladi Kumar is also known as one of the best Bollywood comedians, owing to his comedy roles in Hindi cinema. The movie Hera Pheri proved to be a turning point in the actor’s career. After which, he made us laugh in several films, including Awara Paagal Deewana, Mujhse Shaadi Karogi, Garam Masala, Deewane Huye Paagal, and Bhagam Bhag, Singh is King and Houseful series, and many others to name.

While the Bollywood comedy hero has not starred in many comedy movies, a few of his funny characters, like Uday Shetty in Welcome and Welcome Back, established him as a top Hindi comedy actor. Some of his dialogues like “Tera kaam ho gaya tu jaa”, and “Control Uday Control” are counted as the best funny dialogues of Bollywood.

Though Mishra has played many roles, including serious ones, his comedy shot him to fame. The dialogue ‘Dhonduu…Just Chill’! from the movie All the Best made Mishra famous amongst all age groups. Besides movies, the actor has also been part of many popular Television sitcoms like Office Office, where his character Shukla became a household name. The actor is well known for acting in the movies like Bunty Aur Babli and Apna Sapna Money Money, respectively. And, who can forget his remarkable acting in the Golmaal series! Truly, he has won our hearts with his funny performances and has occupied the top position in the Bollywood comedy actors name list.

Late comedian Razak Khan is amongst the most underestimated Bollywood comedy actors. The actor has graced many movies like Baadshah, Hello Brother, Takkar Pehelwan, with his comic roles, as Manikchand, Ninja Chacha, and Takkar Pehelwan, respectively.

Bollywood has given us several actors; some of them became famous funny actors due to their perfect comic timings and the way they have made uninteresting scenes interesting. Thanks to these funny Bollywood actors as their respective characters have often worked as a stress buster for many. Hindi cinema comedy and its dialogues also play a role in our life. Here we have curated a list of the 15 best Bollywood comedians who have been wowed over the years.

1. Who is the best comedian actors in Bollywood?

The above mentioned is the list of all the best comedians of Bollywood.

2. Who was the most famous comedian?

Jerry Seinfeld was the first famous comedian in the world.

3. What are some of the interesting comedy films in Bollywood?

Some of the best comedians of Bollywood, like Akshay Kumar, Rajpal Yadav, Sanjay Mishra, and Paresh Rawal, have worked on remarkable films like Golmaal, Hungama, Bhool Bhulaiya, Hera Pheri, Housefull, and Fukrey.

4. What are some Indian comedy male actors?

Some of the male comedy actors in Bollywood are Paresh Rawal, Raj Pal Yadav, Shakti Kapoor, Govinda, and Kader Khan.

5. What are the names of some Hindi old comedy actors?