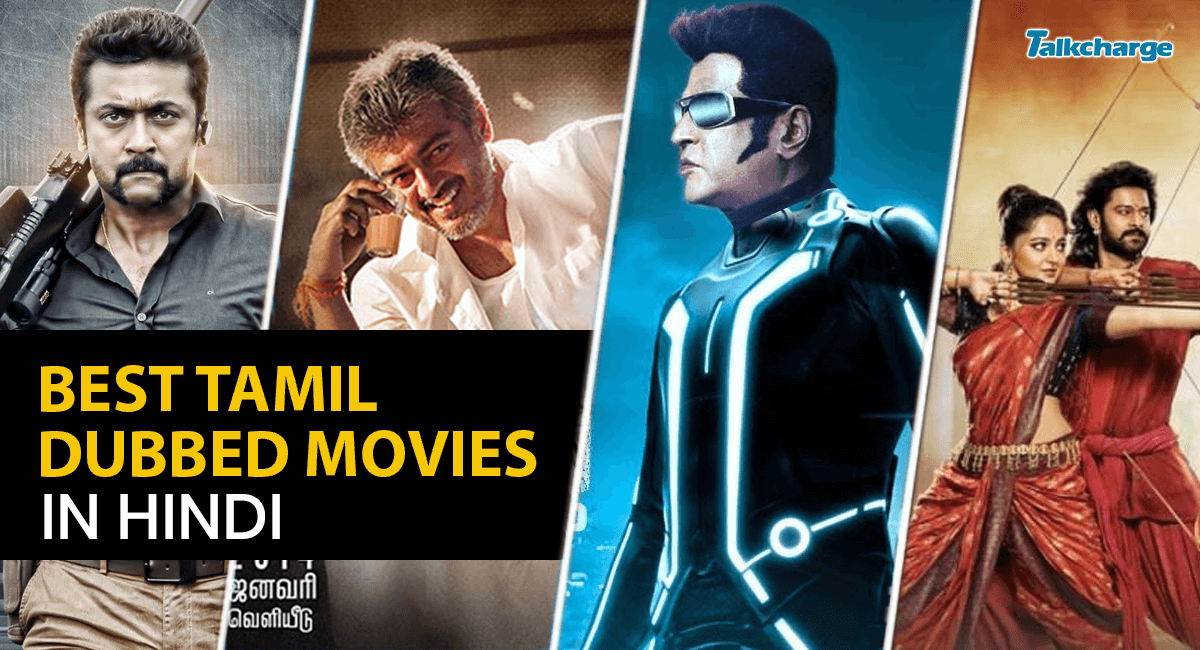 Tamil cinema has given us some of the path-breaking movies, such as Bahubali, which has made the film industry proud across the globe. With the increase in popularity and amazing content that Tamil cinema is offering, people have started taking interest in Tamil movies. Henceforth with breaking the language barrier, now Tamil movies are getting dubbed in Hindi and many other languages to entertain worldwide audience. Here we have shortlisted some of the best Tamil Dubbed Movies in Hindi that are currently available on OTT platforms like Hotstar, Amazon Prime. Do watch these movies and shower some love for Tamil cinema. Some of these movies also have famous Bollywood actors like Vivek Oberoi that would be surely a treat to watch.

The magnum opus was shot in Tamil and Telugu simultaneously and then dubbed in Hindi and Malayalam. This Tamil movie has Prabhas and Anushka Shetty, two of the richest South Indian actor and actresses, in the lead. The film was made with a budget of 180 crores, and it went on to top the list of highest-grossing film in the country. The movie garnered critical acclaim with record-breaking box office success.

Next, we have Roja in our list of Tamil films dubbed in Hindi. This movie is based on a simple girl who lives in Tamil Nadu. She embarks on a journey to find her husband, who was kidnapped by the militants during the undercover mission. The film received universal critical acclaim and is one of the cult classics. After its huge success, the movie was dubbed in Hindi for Hindi speaking audience.

Many do not know that the ace musician A. R. Rahman made his debut as a film composer with this movie. And Roja also marked Pankaj Kapur’s Tamil debut.

This Tamil dubbed Hindi movies list also includes Singam. This film features an honest cop- Durai Singam, who lives in Nallur. He can go to any extent to prove his loyalty to his country. People call him Singam (Lion). On the other hand, Mayil- a big-time extortionist is supposed to visit Nallur to sign for his conditional bail but instead send his allies.

This does not go well with Singam, and he humiliates Mayil. In order to take revenge from Singam, he gets him transferred to the other city. At first, Singam does not like this and plans to leave the job but then decides to expose Mayil with the help of his squad. The original movie broke box office records and was later dubbed in many languages, including Hindi. Besides its dubbed version, the film’s remake was made in Hindi with the same name Singham in 2011, which had Ajay Devgan and Kajal Aggarwal in the lead role.

This is yet another Tamil movie that was dubbed in Hindi after its massive success in its original language. The movie’s story revolves around a scientist K. Vaseegaran (Rajinikanth), and a robot that looks like him. The movie also has a well-known villain of Bollywood Danny Denzongpa –  in the negative role. The movie received prestigious awards like National Film Awards, Filmfare award and many others for its screenplay. Owing to its success, its standalone sequel, 2.0, was released in 2018.

The eldest brother – Vinaayagam, played by Ajith Kumar, pledges not to marry as getting married might create disharmony in the family. On the other side, his younger brother finds a suitable girl for him. Vinaayagam falls in love with Koppuram and leaves for her village to seek her parents’ permission for the marriage. Initially, Kopu’s father denies him, but after seeing his love and sufferings, he is convinced that there is no other person than Vinaayagam who can love her daughter. The Hindi version of this movie is available on many famous OTT platforms.

Adanga Maru was dubbed in Hindi as Vardi Ka Dum in the same year it released. The action thriller features an honest officer Subhas, who investigates a suicide case. He later finds out that it was a murder and work closely to find the murders. The movie was appreciated for its cinematography and its fast-paced treatment, which makes the movie different from other similar stories.

This Tamil movie is the sequel to Muni. The film concentrates on the protagonist-Raghava who is possessed by a ghost of a transgender person. Besides its dubbed version in Hindi, the movie was remade in Hindi and many other languages like Kannada, Bengali and many others. In Bollywood, it was released as Laxmi in the year 2020 and starred Akshay Kumar and Kiara Advani in a titular role.

This romantic comedy was released worldwide in 2016, following by its dubbed versions in Hindi and other languages. It revolves around Remo, who disguises himself as Siva to woe a girl. This movie will make your jaw pain with its comedy dialogues.

This Indian Tamil language was praised for its story and screenplay. The movie revolves around- Kaththi, played by Vijay. He escapes from the prisoner and travel to Chennai, where he falls in love with Ankitha. Later he finds his look-alike who is beaten by the goons. He rescues him and finds that Jeeva is communist and is on a mission. He later disguises himself as Jeeva and pledges to complete Jeeva’s social mission. This is one of the best Best Tamil dubbed movies in Hindi. Like its original version, the dubbed version also received many praises.

This Tamil language movie stars Rajinikanth in the lead as Sivaji Arumugam, who is a software architect. After ten years, Sivaji plans to return to India and start his NGO in order to provide aid to grief-stricken people. Seeing this, the antagonist of the movie- Adiseshan, manipulates him. However, Sivaji makes a comeback and exploits the villain. In the year 2012, the movie was also released in 3D. It was the first Indian movie that used Dolby Atmos surround sound technology. After its huge success, the movie was then dubbed in Hindi.

Kee is one of the best Tamil dubbed movies in Hindi to watch in 2021. It features the ace Tamilian actor Jiiva as Siddharth, who is a well-known hacker. He leads a happy life, but troubles knock on his doors when he fall victim to cyberbullying. This psycho-thriller received mixed reviews from its critics, but the audience loved and was dubbed in a number of languages, including Hindi.

Bhaagamathie was shot in two languages- Tamil and Telugu, and later it was dubbed in Hindi and Malayalam. The film has Anushka Shetty- the most beautiful South Indian actress, in the titular role. It is a story about a woman who is imprisoned in a haunted place and is interrogated in the case of corruption. The film got commercial success, and Shetty was praised for her performance. Following its success, the movie was remade in Hindi as Durgamati, staring Bhumi Pednekar in the lead role.

Anjaan is a story of a brother who struggles to find his younger brother, who has turned into a gangster. The movie received mixed reviews from critics and was soon dubbed in Hindi. Do watch this action thriller on famous OTT platforms.

Kadamban depicts the story of the Kadamban tribe, which struggles to save their native land. The movie also embraces a love story. It was dubbed in Telegu under the name of Gajendrudu. RK Duggal Studios took the Hindi rights of the movie, and in the same year, the film was dubbed in Hindi with the same name.

The action thriller revolves around an honest Police officer who later runs a bakery in order to save his little daughter from people also killed his wife and mother. This movie is all about love and revenge. After garnering a massive success at the box office, the film was dubbed in Hindi and Telugu. Vijay, leading actor won the Best Entertainer of the Year award at the 6th South Indian International Movie Awards for his performance in the film in 2017.

This Tamil movie is about a bodyguard who is assigned to guard –famous landlords daughter. With whom he later falls in love. Owing to its success, the movie has been dubbed in many languages like Hindi. In the same year, Salman Khan and Kareena starrer Bodyguard also released. The film has a similar story and went on to become a blockbuster.

Vedalam is amongst the best Tamil dubbed movies in Hindi. The film concentrates on the mercenary, and former gangster- Ganesh, who reforms to save his sister from an international criminal syndicate/ This movie was successful at the box office, and its dubbed versions also received praises across the country.

Vivegam is a revenge tragedy of an honest counter-terrorist agent who is suspected of turning into a traitor. Following which he takes on a mission to take revenge on people who are against him. The movie has Ajith Kumar in the titular role, while Vivek Oberoi, Kajal Aggarwal and Akshara Haasan have played a pivotal role. The movie is also dubbed in Hindi and is currently available on Hotstar.

This yet Another Rajinikanth’s movie won many hearts because of its amazing storyline and cinematography. The film was released worldwide along with its dubbed version in Hindi. The story of this Tamil movie is set in the Kaula Lampur, where after 25 years in prison, Kabali is set free. He was prisoned on the false charge of leading the massacre in the temple. After his release, Kabali begins to hunt for his daughter and wife after a long struggle. His family unites. It is one of the best Tamil Films that is dubbed in Hindi.

Thuppakki is one of the top-rated Tamil films dubbed in Hindi. It is one of the best movies in the Tamil movie Industry. It has received seven Filmfare Awards. Owing to its popularity, the movie was remade by the same director in Hindi as Holiday in the year 2014. It starred Akshay Kumar in the lead role. Thuppakki focuses on the life of army officers and beautifully narrates the story of an officer- Jagadish Dhanapa, who is never on holiday.

Hope you will watch and love our recommended best Tamil movies collection, dubbed in Hindi. These movies have also been hit on the blockbuster. Not only this but few of these movies like Thuppakki, Bhaagamathie and others were also remade in Hindi. Enjoy watching and stay safe!