All Posts / Entertainment / List of Best Cricket Games for PC 2022 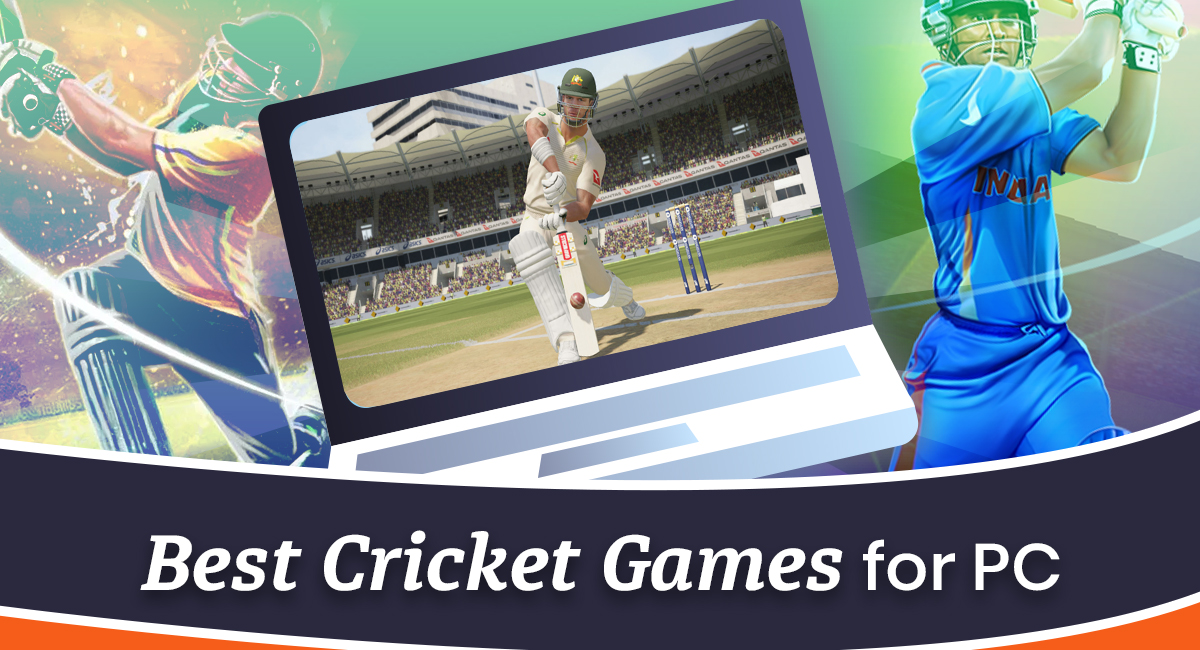 Cricket is worshiped in a country like India. It is immensely popular in every house of the country if you are a young boy, girl, adult or senior citizen, age is no bar for a cricket lover. In case you are a gamer and a cricket enthusiast, nothing can be better than good Cricket PC games. Now, if you wondering which cricket game is best for PC so here, we have come up with these 10 best cricket games list for PC 2022. All the games have immensely engaged the gamers for a while now. We have listed the key features, compatible platforms, and player modes.

Cricket 19 by Big Ant Studios is a fantastic platform for experiencing cricket from your PC. This game was launched in 2019 with the England and Wales Cricket Board (ECB) as partners. When you enter to play the game, you can evolve as a player and leader. You can build your team from scratch, starting from player selection, logo sponsor, uniforms design, and more.  Also, you can own your team, participate in national level tournaments, ODIs, Test Matches, and more. Moreover, it is also one of the best IPL Cricket games for PC 2022. You can practice with your teammates, and if you play well, you could be the next captain leading the nation on an international tournament. You can consider buying Cricket 19 for PC. How exciting! Isn’t it? Let’s see it more about the game.

Even though Cricket 07 for PC  was released in 2006, it is prevalent till now. It was developed by HB Studios and EA Canada, published by EA Sports, and it is currently compatible with multiple platforms. It has good graphics as per that time and features Andrew Flintoff. There are numerous in-game formats. The knockout game allows eight players to decide on the number of overs and play to win the trophy. Test Series will enable players of two teams to play for a series of up to six matches. World Series will allow playing in the venues of Australia with three to five teams. The longest cricket version you can play is the world championship, where you need to beat fifteen teams to win the trophy. All these game formats and smooth functioning made it the best cricket game for PC 2022.

Big Ant Studio created ashes cricket in 2017. This amazing simulator PC game is a pre-sequel of Cricket19. It is one of the games of the Ashes Cricket series, which took its name from the real Ashes series of Australia. So, you can either play as an individual or join the team of Australia or England and rule it. There are multiple features and tools in the game, which allows you to control the shots and bowling well. Undoubtedly, it is one of the best cricket PC game 2022.

Next in the list of the best PC Cricket Games list is Don Bradman. Don Bradman Cricket 17 is an enthralling cricket-based PC game released in 2016. Yet it is one of the best cricket games for PC 2022. For playing this game, you must have a stable internet connection. It is the largest cooperative game dependent on the community to let you play great matches in cricket. The game allows character creation for your team, but it does not resemble the real cricket players. It also replicated international stadiums in the game.

Ashes Cricket 2009 is another one of the best PC Cricket games published by Codemaster. This game has managed to get the license of Cricket Australia, MCC (Marylebone Cricket Club), ECB (England and Wales Cricket Board to include all the official players of the rival team of Australia and England. Therefore, the graphics are super awesome and very close to reality.  This is added by fantastic sound and visual effects.  For its amazing thrill gaming experience, it is one of the best cricket games for PC.

Mode- Single-player, Multiplayer (Up to 4 players)

Another one in the top PC Cricket games list is EA Cricket 2005. The pre-sequel of EA Sports Cricket 2007, EA Cricket 2005, is love for its stability and shot control. The game has not lost its trend as many players are comfortable with it and do not wish to try another version. It was released in only three countries, namely Australia, New Zealand, and England. With its popularity, it reached the ends of the world, in the hands of every gamer who loves crickets. Also, it was the last game in the series where players had to use real names. Therefore, it is one of the best cricket games for PC 2022.

While playing Brian Lara Cricket 2005, you will feel that your game is broadcasted, and you are a cricket star. The Publishers of the game has the license to use many real-life elements to make it real-like.  It is based on the Cricket World Cup Africa 2003 and ICC Championship Trophy 2004. Faces and names of real cricketers are used. The kit, accessories, and bandages are as real as we watch on TV. They have also shown the actual sponsor of those tournaments. On top of that, it imitates the camera perspectives of exact TV coverage, including hawk-eye, ball tracker, and more.  It is a treat to watch and play.

Cricket Coach 12 is one of the best cricket games for PC 2022 is the Cricket coach 2012. It is known for its massive database of statistics. The matches you play can be saved and stocked to analyze minutely later. The game takes you on the tour of the England Cricket series against South Africa and the West Indies. This is one club of online cricketers where players worldwide play, and their performance is rated by all the matches they ever played. It is best for a dedicated cricket fan that enjoys statistics. The fashion of the game has changed with time and so the minute details in it.

International Cricket Captain 2010 was the most evolved cricket game for PC at that time and still holds a distinguished place. It is the sudden elevation from all its previous versions of the game. It allows all cricket formats, including T20. This is one of the best T20 cricket games for PC. Other formats are Test series, World Cups, Domestic matches, and many more. This is built for serious cricket fans. There is no denying the fact that this games comes in the best PC Cricket games.

The series of International Cricket captains is an enormous hit because of their players’ interface. It was released in 2017, and Asian locations are added to the game venue options to cater wider player community. The newly added locations are Bangladesh, Pakistan, and more.

The gaming experience is evolving with the upgrade in technology and Artificial Intelligence. Today most games are imitating the real cricket matches, making you the writer of your destination. The Cricket playing experience was never better than this. The listed games are the best cricket games for PC 2022. Unlike other free online games, you need to download it from authentic sources to enjoy all its features. Hence, you can experience playing these and let the thrill of the adrenaline rush excite you.

1. What is the best cricket game for PC?

We have listed the best Cricket games for PC. You can consider going through the list. However, according to the rating and number of downloads, Cricket 19 and International Cricket Captain 2018 are considered among the top Cricket PC game 2022.

2. Which is the best IPL Cricket game for PC?

Cricket 19 is so far the best IPL cricket game for PC. It allows you to create your team with a logo and sponsor.

3. What are the types of modes in Cricket games for PC?

In PC, you can play as a single-player or multiple players up to four participants.

4. How much RAM is required to run a cricket game on PC?

In 2022, your PC needs to have at least 4GB RAM to experience cricket like never before. If you have a lower configuration PC, you can still play older versions of cricket PC games.