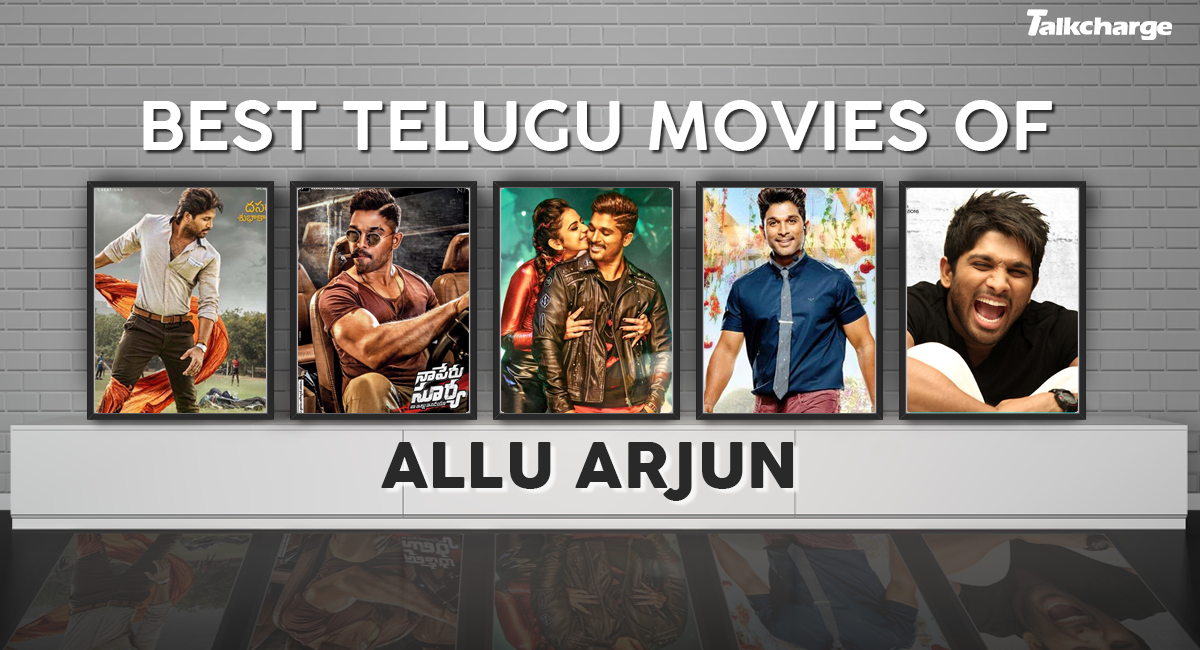 The stylish star of the Telugu movie industry, Allu Arjun has over the years garnered the status of a superstar with his hard work, different roles, and unique style. While the actor is believed to step into the industry with Gangotri, in 2003, it was the movie Vijeta through which he marked his debut in movies at the age of 3. Also, known as Bunny and Mallu Arjun, the actor is also one of the best dancers that the industry. He has received 5 Filmfare awards and numerous accolades for his versatile acting. The actor would be soon seen in his much-talked-about movie Pushpa which would have a Christmas release. His last release Ala Vaikunthapurramuloo was a blog buster and was one of the highest-grossing Indian films of 2020. Below we have curated Allu Arjun movie list along with some of the best movies of his career as well as his movies that are yet to be released.

In the Allu Arjun movies list, Pushpa: The Rise is the latest one. It is now one of the massive hits in the entire professional journey of Allu Arjun. The movie tells about the growth of a low-wage laborer in the smuggling of red sandalwood. This film has accumulated over ₹51 crores in box office collections in India. It has won numerous accolades like Filmfare Awards South, Mirchi Music Awards, Sakshi Excellence Awards, and South Indian International Movie Awards.

Vaikunthapurramuloo is amongst the greatest hits in Allu Arjun’s career. The family drama was a sensational hit at the box office commercially and was praised for its narrative. With the success of Vaikunthapurramuloo is basking in the glory. The movie has won ten South Indian International Movie Awards along with the best movie in Telugu.  The movie stars Allu Arjun, Pooja Hegde, and Tabu in the key roles.

This is yet another one of the most loved Telugu movies of Allu Arjun career. The actor donned a rugged look for his character and looked his best. The film stars Allu Arjun and Anu Emmanuel in pivotal roles. If you have not watched this movie, subscribe to Zee5 and watch it.

Next on our list of hit Allu Arjun movies is Sarrainodu. In this movie, the South Superstar was seen in the role of an ex-military man that garnered him much praise. Sarrainodu was a commercially hit and 2nd highest grossing movie if 2016. It is touted as one of the best films of Allu Arjun. The movie also features Rakul Preet Singh, Catherine Tresa, Srikanth, and Aadhi Pinisett.

The actor teamed up with Trivikram Srinivas for the second time in his career for this movie. Allu was applauded for his heart-touching role. It was the second movie of Arjun’s career that earned more than Rs. 500 crore shares across the globe. It wouldn’t be wrong to say that S/o s/o Satyamurthy gave Allu Arjun a star status as his popularity increased outside the country.

Race Gurram was a path-breaking movie of Arjun’s career. It was yet another best movies of his career. The movie was a super hit and went on to become Allu Arjun’s first movie to get a business of more than Rs.100 crores and it also emerged as the highest-grossing movie of that year. Arjun received many accolades for the movie including the Filmfare award for best actor. The movie was directed by Surender Reddy and featured Shruti Haasan, Shaam, and Ravi Kishan besides Allu Arjun.

Next on the list of best Allu Arjun movies is Julayi. This action comedy received positive reviews and was a commercially hit. The actor was paired with Ileana D’Cruz and received many accolades for his portrayal. It established him as a versatile actor in South Indian movies. Directed by Trivikram Srinivas, Julayi is one of the best movies in Telugu cinema.

Vedam is believed to be one of the milestones of Allu Arjun’s career. With his top-notch performance in the movie, the actor becomes one of the top actors in Tollywood. He played the role of a middle-class man, Cable Raju. The actor also bagged the Filmfare award in the category of Best Actor. The movie was directed by Krish and had an ensemble star cast- Anushka Shetty, Manchu Manoj, Manoj Bajpayee, Saranya Ponvannan, Nagayya, Deeksha Seth, and Lekha Washington.

Parugu is yet another one of the best Allu Arjun movies. The stylish actor of Telugu cinema was paired with Sheela Kaur. The actor reached the heights of success with this movie. He also won Filmfare Award in the category of Best Actor for the movie. The movie was remade in different languages including Hindi as Hiropanti. If you haven’t watched the movie yet you can watch it on YouTube.

Desamuduru was Allu Arjun’s first commercial movie and it was also one of the most successful films of his career. Arjun’s pairing with Hansika Motwani garnered love from his audience. Desamuduru was a complete entertainment package. For the first time, Allu was seen mouthing humorous dialogues and also impressed the audience with his fighting and dancing skills.

This romantic movie established Allu Arjun as a romantic hero of Telugu cinema. It received highly positive reviews from critics. This movie also garnered Allu praise for his dancing skills. The actor played the role of a happy-go-lucky guy who falls in the love in love with her classmate, Geetha on his very first day in college. The movie was a commercially hit and received highly positive reviews from critics. Owing to his acting, Allu received Nandi Special Jury Award. The movie also had Anu Mehta and Siva Balaji in the key role. Owing to the success of this movie, the sequel of Arya was made in 2009 that won Ali Filmfare Award for Best Actor. Undoubtedly, Allu Arjun best movie of his career goes to this cult film.

Allu Arjun thundered into the Telugu cinema with his debut movie Gangotri. He played the main role in the movie and received praise from all the quarters for his character. The movie also had Aditi Agarwal along with Allu Arjun. The movie was a hit!

The actor would be soon in his much-awaited movie Pushpa 2-The Rise which is slated to release in theatres in 2023.  Besides Allu Arjun, the multi-lingual action thriller also has Rashmika Mandanna-winning star Fahadh Faasil. The movie is believed to be one of the biggest blockbusters of the actor’s career and it will have two parts.

List of Movies of Allu Arjun as a Child Artist

1. The stylish star of Telugu cinema made their debut as child artists in Vijetha released in 1985. The actor was barely 3 years old.

2. While everyone knows Arjun as a good dancer but very known that he is an excellent singer as well. He lent his voice to the IDM track for his movie Sarrainodu.

3. The superstar lover reading Self-Help books, one of his favorite books is “Who Moved My Cheese?” by Dr. Spencer Johnson.

4. Allu Arjun is one of the richest actors in South India. His net worth is over Rs 180 crores.

5. Allu Arjun also owns a vanity van worth Rs. 7crores which is designed by Reddy Customs Carvan and the actor has named it Falcon.

6. The actor has a collection of super-expensive cars that include Range Rover, Hummer H2, and Jaguar XJ L.

Allu Arjun is one of the richest actors in India. The actor is best known for his distinguished style, dance moves, and versatile acting. In his long illustrious acting career, he has played a multitude of roles ranging from positive to negative. Some of the best movies of the actor are Arya, Desamuduru, Vedam, and Ala Vaikunthapurramuloo.