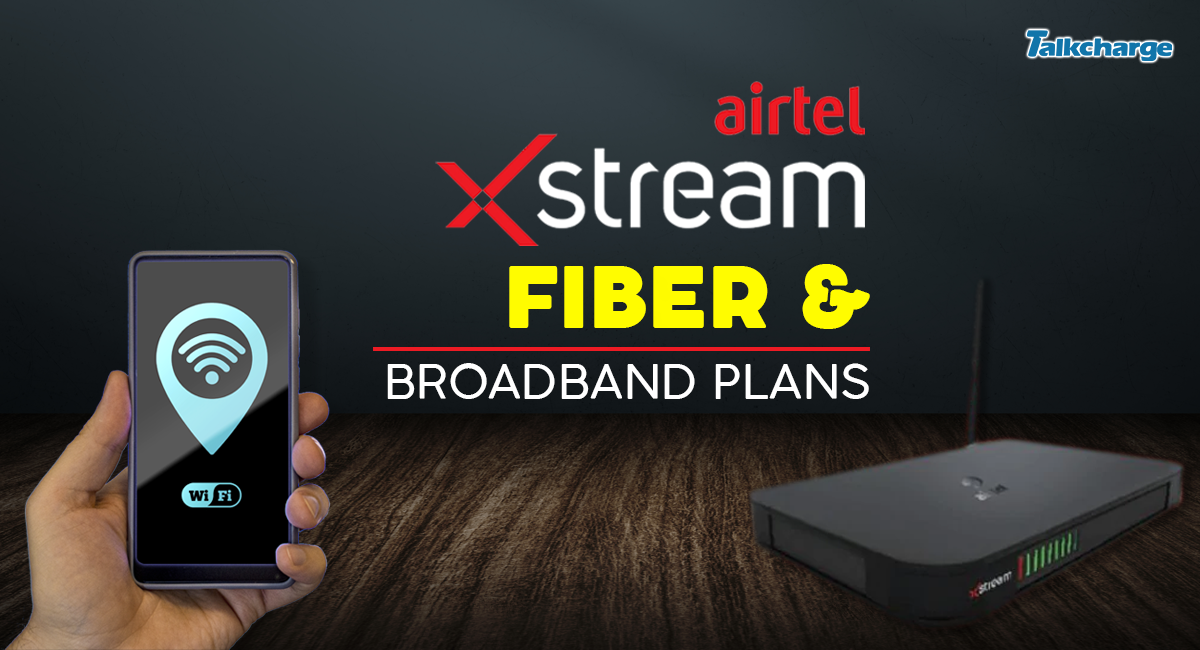 The usage of the internet at home has increased manifolds, especially during the Covid-19 pandemic as more people prefer to work from home. To facilitate its users, Airtel has re-introduced its Broadband plans as Airtel Xstream Fiber plans. New Fiber plans provide fast broadband speed up to 1Gbps, unlimited data and free voice calls. With this, you can watch your favourite content on OTT platforms; attend online classes and virtual meetings without any hassle.

Airtel’s FTTH (Fiber to Home) technology offers Fiber optic cable, which could be connected to 10 devices through a Wi-Fi router-modem. These plans are available across the country that too, at an affordable price. Scroll down to know about Airtel Xstream plans in detail along with their validity.

With new Airtel Broadband plans, you can get fast data speed with other additional benefits:

The user can choose any of Airtel fiber plans that suit their needs. The additional benefit of Airtel Xstream fiber plans is that you can upgrade your plan and reap the benefits of unlimited plan. For this, you would have to pay Rs. 499 per month, along with the amount of the plan that you have selected.

Airtel broadband plans are available in Bangalore, Delhi-NCR, Chennai, Hyderabad, Ahmedabad, Kerala, Mumbai, and other parts of the country.

The validity of each fiber plan is 30 days. Along with these plans, one can purchase an Xstream DTH box at Rs.1850 only with 6 month HD pack and watch web series and channels on your TV. Look at the different Airtel Xstream plans and Airtel Xstream Fiber prices.

Unlimited Airtel Broadband plan is available at the mere price of Rs. 499. It offers unlimited data at the speed of up to 40Mbps along with unlimited local and STD calls. This pack includes Airtel Thanks benefits. You can get access to Wynk Music, Shaw Acadamy and Airtel Xstream.

This is one of the most demanded Airtel Fiber plans. The Premium package comes with the best of the features that include unlimited local/STD calls, unlimited internet with a speed of up to 100Mbps. Besides these, Airtel Xstream user can get a free subscription to Airtel Xstream, Shaw Acadamy and Wynk music app through which you can set free Airtel caller tune. The rental price of this Airtel wifi plan is Rs.799.

If you want to binge watch movies, shows and series on the OTT platforms like ZEE5 Premium, Amazon Prime, Disney+ Hotstar for free, then this Airtel Xstream fiber plan is a perfect match for you. In addition to free subscription to these OTT platforms, you will also get a subscription of Wynk Music and Airtel Xstream. Talking about data and speed, this Airtel internet plan offers Unlimited data at the speed of up to 200Mbps and unlimited local/STD calls. You can do an Airtel Xstream Fiber Recharge of Rs.999 to claim this entertainment plan.

This is one of the new Airtel Xstream Fiber plans that provides blazing internet speed of up to 300 Mbps with unlimited STD/Local calls. This Ultra broadband plan from Airtel also gives a subscription to Disney+ Hostar, Airtel Xstream and Wynk Music. Not just this, you buy Xstream box along with the plan you will get access to Netflix and Amazon Prime at the monthly price of Rs. 1498.

The VIP Airtel broadband plan is priced ad Rs.3999. It lets you enjoy the fastest broadband connection in your home with a speed of up to 1GBps, which means you can download and upload anything instantly. This, too, gives you the benefit of Unlimited STD/Local calls with Airtel Xstream, Disney+ Hotstar and Wynk Music membership. If you wish to purchase Xstream Box, you would be able to stream your favourite OTT channels like Zee5 and Amazon Prime.

Airtel Fiber plans above Rs. 799 features subscription to leading OTT platforms like Disney+ Hotstar, Amazon Prime Videos and Zee5 Premium. These plans also offers additional subscription of number of streaming services that includes Shaw Acadamy, Wynk Music and Xstream app. You can enjoy all this without compromising on your budget and time!

About Airtel Xstream Box and App

It is available at the price of Rs. 2,499 and comes with a number of benefits that include access to more than 500 app and 500+ TV Channels in 4K resolution with realistic colours and mesmerising clarity.

With Airtel Xstream 4K Hybrid Box, you can turn your smartphone into a remote and gamepad. It has a built-in Chromecast that lets you cast the content from your smartphone to the TV. Plus, search with Google Assistant.

Download the Airtel Xstream app now on your smartphone or laptop and watch LIVE TV, shows, web series, movies, kids’ shows and news in different languages on the go.

You can visit Airtel’s official website or can take the connection through its app and follow these steps.

In a bid to provide its users fastest data speed at home, Airtel has revamped its broadband services and given it a new identity as Airtel Xstream Fiber plans. These packages offer unlimited STD/locals with access to OTT channels. Airtel Xstream broadband plans are boon for the users as they get unlimited internet plans that start from Rs. 499.

1. What is the Airtel Xstream fiber plan?

There are five Airtel Xstream plans that are Unlimited, Premium, Entertainment, Ultra and VIP. These plans offer high-speed data and subscription OTT platforms like Zee5, Amazon Prime and many others.

2. What is the cost of Airtel Xstream fiber?

The price of Airtel Xstream fiber begins at Rs. 499.

3. How can I Change Airtel Broadband Plan?

You can call 121 or upgrade Airtel Broadband plan.

The Xstream fiber box comes with a Fiber optic cable that can be connected with ten devices.

No, Airtel Fiber Internet plans do not provide subscription of Netflix. But they do offer other OTT platforms like Amazon Prime Videos and Disney+ Hotstar.
a) Entertainment- Rs.999/month
b) Basic- Rs.499/month
c) Basic + TV- Rs.699/month

8. What are Airtel Broadband plans Kerala?