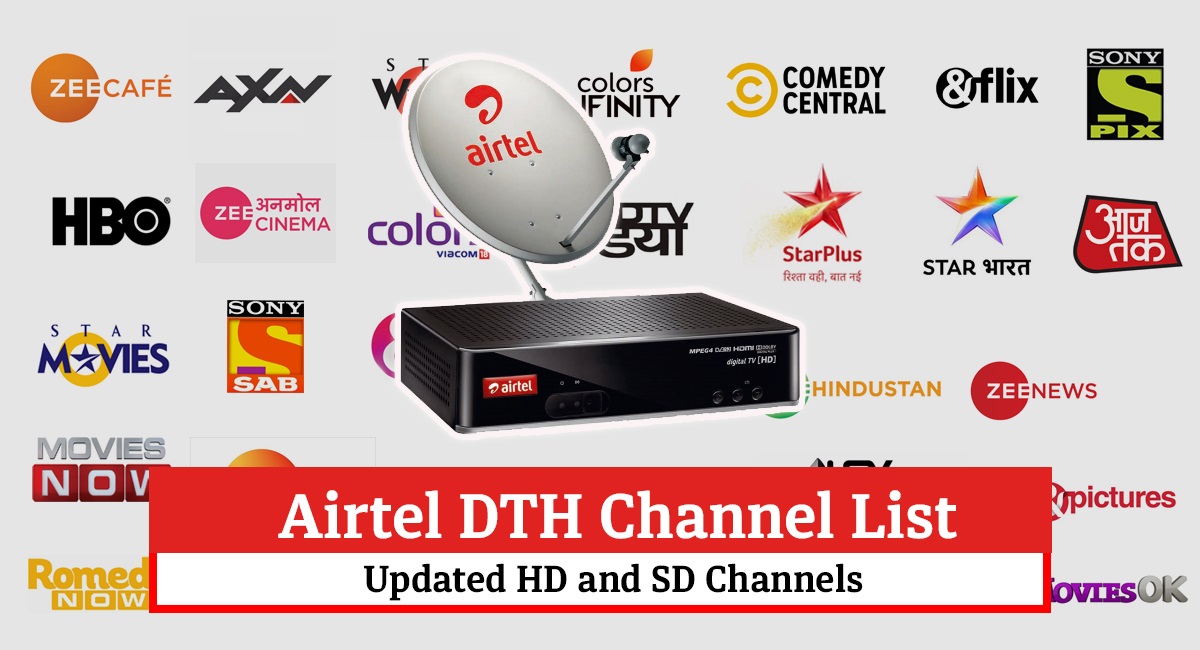 Airtel Digital TV, also known as Bharti Telemedia Limited, is one of the Indian direct-broadcast service providers. The company is owned by Bharti Airtel. It was introduced in the year 2008 and shares more than 10.07 million subscribers. Read more to know about all the Airtel DTH Channels

Here we have curated a vast Airtel DTH channel list that includes High Definition channels that you can watch on Airtel DTH. The list has all your favourite channels, such as music, lifestyle, entertainment, in Hindi, English, and regional languages.

Airtel provides an array of High Definition channels that would surely up your TV watching experience. Here we have curated the Airtel channel list in HD along with their numbers. You can subscribe to any of these channels and watch at your convenience.

Love hearing English music?  Tune in to Airtel Digital TV channel list of entertainment and watch all your favourite content. Some of the channels that you can watch are Zee Café, AXN, Star World and others listed below.

In order to watch your favourite English movies, add these channels in your Airtel Dish TV channel list. You can also customize your plan according to your preference. For this you can connect with Airtel Digital TV customer care team.

From all the latest soap operas to TV series, now you can relish your favourite Hindi serials without any problem. Below we have shared Airtel DTH channel numbers along  where you will find all the Hindi entertainment channels that could be a perfect solution for your boredom.

For all the Hindi movie buffs, here we have provided the Airtel DTH channel list 2021, where you can watch old and new Hindi films with your friends and family. Some of the famous channels for movies are Sony Max, Zee Cinema, Zee Bollywood etc.

Infotainment channels present information in the form of entertainment. If you like watching such content, you can add following channels to your Airtel dish channel list and increase your knowledge about Geography, animals, science, and others.

Below we have curated Airtel cartoon channel numbers that would be indeed no less than a delight for your little one. From Cartoon Network to Pogo, the list has all the cartoon channels your kid would love to watch.

To listen to your favourite chartbusters, update your Airtel channel list of music. It has all the latest channels where you will find all the old melodies, the latest party songs etc.

Stay updated with what’s happening in and around the country through Airtel news channels. It has all the channels like NdTV 24X, CNBC TV18, India Today, BBC World News and many more to name.

From T20 to Indian Premier League you can wall all the cricket matches and others sports on Airtel DTH. All the IPL fans out their tune in to IPL 2021 Airtel Dth channel list and support your favourite team virtually. For this all you would have to do is update your Airtel Dish TV Sports channel list enjoy on-going sports events and series.

Airtel Digital TV is one of the renowned DTH providers in the country. It showcases an array of channels, ranging from entertainment, informational, devotional, and many others in languages like Hindi, English, and regional. In this blog, we have listed all the channels and the numbers of the channels that you can see on Airtel DTH, also have a close look at FAQs if you have any queries. You can also have a look at Tata Sky 220 Pack Channel List.

1. What are the channels available in Airtel DTH?

In this blog, we have listed numbers and channels names of all the available channels in Airtel DTH.

2. How can I select my channel in Airtel DTH?

Turn on the Airtel Digital TV, go to channel number 998 then follow all the instructions listed on the screen. Subsequently, a code would be displayed. SMS the same code to 54625 from your registered mobile number.

3. What is the channel number of Doordarshan in Airtel digital TV?

Doordarshan is aired on channel number 148 on Airtel digital TV.

4. How can I remove unwanted channels in Airtel digital TV?

Visit the official website of Airtel and log-in through the registered Airtel number. Then click Manage Account Option, select the Top-Up option on the right corner, and select the channel you wish to remove or add.

5. What is the channel number of Star Sports in Airtel DTH?

6. What is the NDTV channel number in Airtel Digital TV?