90s Cartoon Shows That Made Our Childhood Memorable

All Posts / Entertainment / 90s Cartoon Shows That Made Our Childhood Memorable 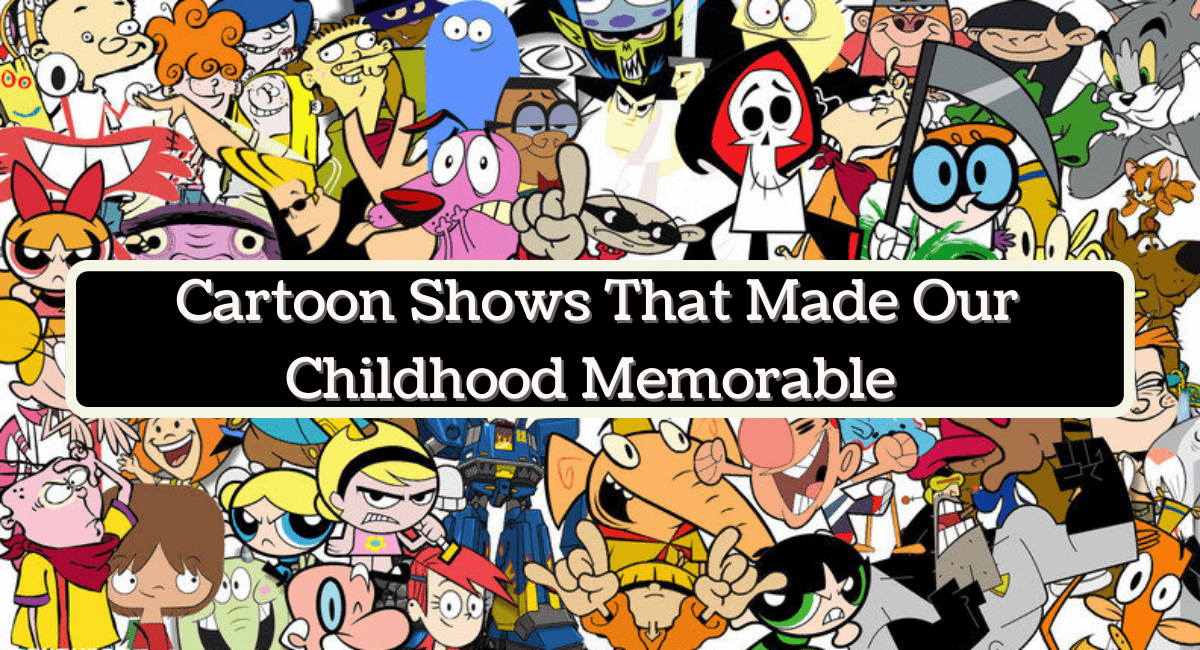 90s was the best time as it had the best of TV series and cartoon shows that were the only medium of entertainment for many of us. Back then, no social media existed, and watching TV was our main hobby. Cartoons like Tom and Jerry, Popeye the Sailor, and many became famous for their decent storyline and teaching moral ethics.

Not to forget, the same era also gave us some of our favourite superheroes. Let’s take a stroll down memory lane and remember 90s cartoon characters that made our childhood memorable.

This was a Canadian-American animated television comedy series that featured three preteen boys – Ed, Edd, and Eddy. The boys were famous for making their siblings fool to get money, which they could spend on their favorite confection. While none of their plans worked out but we love their actions. The show was telecasted on the original Cartoon Network.

This was probably one of its kind 90s cartoon shows that boasted feminism. The three little girls-: Blossom (pink), Bubbles (blue), and Buttercup (green), not only made our childhood memories but also taught us that girls are no less. Some of the other characters the show had were Professor Utonium- father and creator of Powerpuff Girls, and Mojo Jojo, who was the main villain in the show.

Dexter’s Laboratory was one of the iconic cartoon network series of the 90s, and it still remains to be. The young and intelligent Dexter was always up for a new invention, and his sister, fondly known as Dee Dee, left no stones unturned to spoil his experiments. The show explored brother and sister bonding. Wish we, too, could be that smart in our childhood.

Next in our list of all-time favorite 90s cartoon shows is Johny Bravo. The American fantasy TV series was about a muscular young man, Johnny Bravo, who has no other work except woe girls. His all master plans used to get flop, and resulted to bizarre situations, which were definitely fun to watch.

This cartoon show was aired on the Cartoon Network; in 1997, the show made a comeback with few changes. Johnny Bravo has completed more than four seasons. The show was also nominated for Annie Awards, YoungStar Awards, and Golden Reel Awards.

The musical comedy show is amongst the top-rated cartoon shows of the 90s. It had a number of characters like Yakko, Wakko, and Dot, Ralph the Security Guard, Dr. Otto Scratchansniff, Slappy Squirrel, and many others to name. The show was bliss to watch!

This animated series was originally telecasted on the Fox Kids. It was the first cartoon character that was based on the superhero. The series received huge accolades for its thematic complexity, darker tone, and artistic presentation. It was also one of the best animated series of all time and was ranked at No. 2 in the list of greatest animated television shows of all time by Wizard Magazine.

The cartoon show had many of our favorite 90s cartoon characters like Donald Duck, Scrooge McDuck, Huey, Dewey, and Louie, Mrs. Beakley, The Beagle Boys, and many more to name. Owing to the kind of love and praise DuckTales received, the show’s reboot has recently made its way on the cartoon channels.

The American animated comedy series has all the characters based on Tiny Toones that includes Foghorn Leghorn, Lola Bunny, Speedy Gonzales, Sylvester, Tweety, Granny, Gossamer, and many more to name. Though the series was first telecasted in the ’30s, it gained massive popularity in the 90s.

Like Batman, X-Men took us into the fantasy world of the superhero. The show has been bliss for many. The series dealt with many serious issues. The show was inspired by another 90s cartoon show-X-Men. The show has had many seasons, and we are glad that today’s generation can also watch it.

Captain Planet and the Planeteers revolved around the five teenagers who five magic rings. The rings are used to solve common problems on earth. However, during the huge crises, the five rings are joined, giving way to Captain Planet who does best to save the planet.

The show promoted environmentalism and educated its audience on how they can save their environment with small initiatives.

The Sylvester & Tweety Mysteries has to be one of the iconic cartoons from the 90s and early 2000s. The show has pivotal characters from Looney Tunes that included Tweety, Sylvester, their Granny, and bulldog.

Sylvester was always after Tweety and made all the attempts to eat her, but he failed every time. Despite the rivalry between the duo, the pair helped Granny to crack many cases.

While this cartoon show was initially telecasted in the ’40s, it was re-telecasted through the 90s and 2000s and became one of the most-watched and liked cartoon shows. The show has had many spin-offs, including The Tom and Jerry Show, The Tom and Jerry Comedy Show, Tom & Jerry Kids, and many others. Not to forget the feature film-Tom and Jerry: The Movie that was released in the year 1992.

The show featured Tom (a cat) and Jerry (a mouse) and shared their typical antics. While both never shared a good camaraderie, but if anyone of them got stuck into crises, the other was there to back him.

While the show ended ages before, but it was re-telecasted in the 90s! We still can’t get over -The Flintstones and his family that transported us back to the Stone Age. It went on to become one of the longest-running network animated TV series for around three decades.

This cartoon show also gave way to many other cartoon shows that include The Pebbles and Bamm-Bamm Show and Cave Kids.

Courage, The Cowardly Dog, is next in our list of famous 90s cartoon shows. The protagonist of the show was a pink dog who almost failed to justify his name-Courage. He was adopted by an elderly couple. The family lived in an isolated farmhouse, and frequently encountered monsters and vampires. The show had four seasons, and each season had 13 episodes.

It is one of the most favorite cartoon shows that aired on the Doordarshan channel in the 90s. The show was famous for its different storylines and emphasized that humans and animals can live together peacefully. The TV series has made comeback numerous times over the years.

To your surprise, the show was telecasted in the ’70s; however, it was telecasted on Cartoon Network for the first time in 90s. The show was about a dog named Scooby-Doo, his master Shaggy and his pair of friends.

Popeye, The Sailor, is one of the classics of cartoon network shows of the 90s. The show emphasized on the importance of how green leafy vegetables, ideally spinach.

The show also had Olive, his love lady, and Brutus, who made all the plans to win Olive. The show was followed by new seasons with the same characters.

Known to be one of the most loved animated series of all the times, The Mask-Animated series was inspired by the movie with the same name. However, unlike the movie, Stanly can use the mask in the night as well. The show had three seasons that had 54 episodes altogether.

This animated TV series was produced by Walt Disney Television Animation. It was one of the best shows on the Disney Channel. The series was re-telecasted in 1997. The show was based on the young man Aladdin and his companions. It is an extended film story with the same name that showcased Aladdin’s prior life.

Timon & Pumbaa (TV series) was all about titular characters and their camaraderie. While many do not know that both the characters were also part of ‘The Lion King.’ The TV series showcases the life of both characters in different settings. The show had some other memorable characters such as The Laughing Hyenas and Rafiki Fables.

SpongeBob SquarePants is amongst the famous Nickelodeon 90s cartoon shows. SpongeBob lives under the sea and owns a restaurant. It is counted amongst the longest-running American animated TV series and the highest-rated one on Nickelodeon.

The show has garnered a huge fan following over the years and has also been part of many memes. The show definitely made our childhood awesome!

TaleSpin was amongst the best 90s Cartoon shows. It had famous characters from The Jungle Book that included Baloo the Bear, Shere Khan the Tiger, and Louie, the Ape with new characters. It was one of the top-rated Disney Afternoon shows that established Disney characters as prime characters.

The series is based on the fictional metropolis – Megakat City, which had cats in the form of humans called The Swat Kats. Throughout the series, Swat Kats fight against many villains. The show was broadcast on the Cartoon Network throughout the 90s.

Spider-Man was American Superhero Animated TV series based on the Marvel comics’ main character (Spider-Man). The show was later adapted in number of ways and gave our favorite hero Spiderman. Today Spiderman has become one of the huge franchises.

While reminiscing our childhood, the first thing that pops up in our mind are fabulous cartoon shows that were telecasted in the 90s. While some of them are still telecasted, but most of them have ended years back. The first cartoon channel that came up with animated and cartoon series was Cartoon Network was, followed by other channels like Nickelodeon, Disney Channel, and many others. While most of the 90s cartoon shows are not aired on any of the channels, you can still watch them on YouTube or DVDs and relive your childhood.