How to Play Teen Patti and What are the 3 Patti Rules?

All Posts / Entertainment / How to Play Teen Patti and What are the 3 Patti Rules? 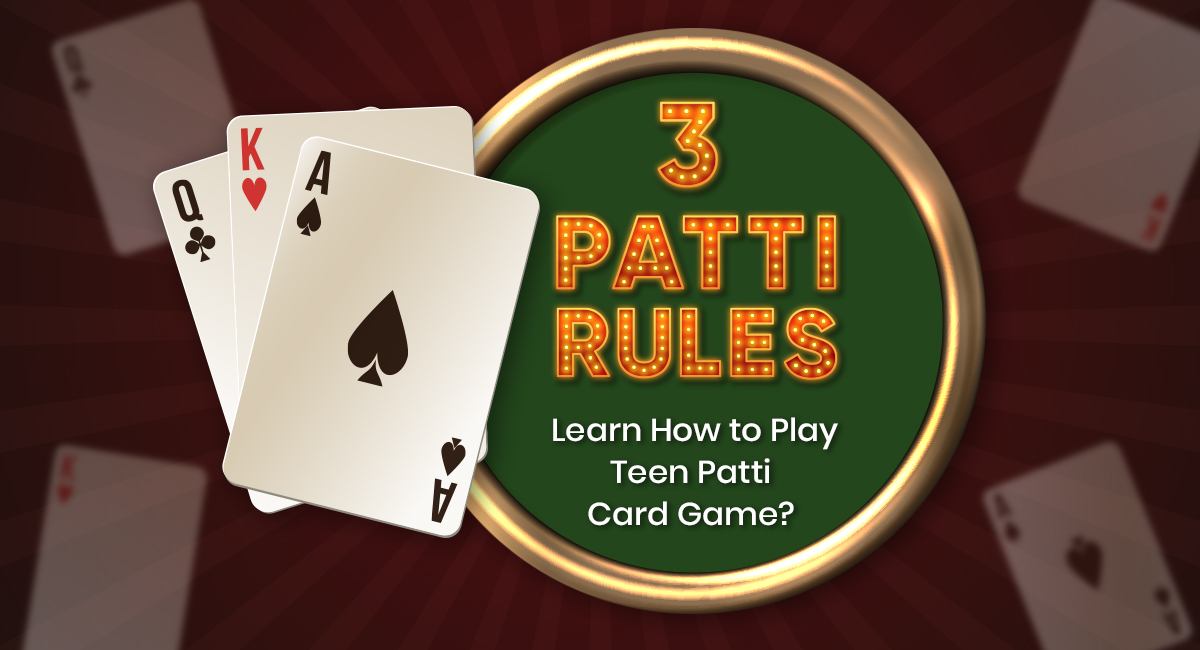 Teen Patti is a three-card game, massively popular in India. It is a simplified Indian version of poker. This card game can be played in a casino or online with three to six people. It is an exciting game that has fascinated the players. If you are new to the game, we have come up with detailed information about how to play 3 Patti with its hand rankings and 3 Patti rules. So stick with us till the end of the blog to know all you need.

If you ask me how to ace this game, I would answer that it’s a physiological game and a lifetime is less to master this game. Therefore, it is important to learn all the teen patti rules of this Indian gambling card game. So let’s know more about this game.

How to Play Teen Patti?

Teen Patti is a variation of poker games played by a minimum of three players and a maximum of 6 players. The game is played with 52 cards, excluding the joker. So as in any other poker game, the players have to put a certain Ante or minimum amount to the game in the pot. Then the dealer gives out three cards to each player. The ultimate way to win the game is to hold cards that have high ranking than others. Let’s go ahead and read about the 3 Patti rules in detail.

3 Patti Rules You Must Know

If you are a beginner or an intermediate player, then you should make sure that you have no doubt about the teen patti card game rules as it is said that one who rules the games is well versed with the rules of the game. So let’s start to understand the rules of the Teen Patti game and other details.

Every player gets three cards in hand, and the combination of these cards is all that makes to win or lose the game. Every combination has a ranking. By convention, Teen Patti game rules have categorized the probability of the cards. Here we have listed Highest to lowest Teen Patti hands ranking of the cards.

Do you know what are the Teen Patti rules for betting? Well, when the dealer has dealt with the cards and each player has three cards, a player can either see the card, and we would call them ‘Seen Player’. And the player who chooses to go by luck keeps the cards unseen, and we call them ‘Blind Player.’

This choice affects the betting of each player as well. The players who have seen the cards have to bet double what the blind player is betting on. The blind player can pick and see the card anytime and become seen player.

Round 1: The ante or chaal is the minimum amount that was bet to start the game. It becomes the current stake for the first round in 3 Patti.

Round 2: Next round of betting will depend on Blind and Seen players.

Likewise, the round goes on, and finally, the person with the highest hand ranking wins the game and earns the chips in the pot. If you play similar money earning game, you can also win real money through betting and winning.

What is Sideshow in Teen Patti?

Sideshow is a compromise Teen Patti rule. If you wish to compare your card in the middle of the game, you can do it with another player. You have to raise a request for it. The one with lower hand ranking will have to pack or fold the cards, and the game would continue. But sideshow requires the agreement of both candidates.

The teen Patti winners are undoubtedly by chance, but the 3 Patti rules can be used to make all the difference. So let’s learn how a player is declared the winner in the game:

1. The player with a higher card ranking wins the game eventually.

2. If a person keeps the card open and other players fold or pack the game, he is declared the winner.

3. If all players pack or fold the cards except two players then they keep on betting. If one person raises the request for the sideshow and the other accepts it, then the one with the higher-ranking card will win the game.

What is the difference between Poker and 3 Patti?

The major difference between the formats of these two card games is the number of cards involved. In poker, the players use the combination of the five best cards out of seven cards. Whereas, Teen Patti is a 3 card game that runs on the concept of probability. You can also say that teen Patti is the game of chance, while poker requires skill, strategy, and probability. Both these formats are available as Free online games where you can enjoy the thrill of the game in your comfort.

The 3 Patti rules might seem a little difficult, but keeping some handy tips in mind can help you play like a professional. You can find pro players in Adda52 and other poker websites for a fun-filled gaming experience. Above we have listed all Teen Patti riles and here are some common tips and tricks for playing 3 Patti:

The game of Teen Patti is not only about winning the game and the pot money, but it also has to do with you analyzing other players’ psychology. You need to be decisive about the amount you want to pot. Also, you have to be aware of the players who might be playing buff. So this exciting game is delightful to play. Here we have given the 3 Patti rules that would be helpful for beginners and for anyone who wants to improve their game.

The highest Teen Patti hands ranking of 3 Patti is a trio with the same number and rank.

2. Which card color is the highest?

According to alphabets, the highest color code can be considered spades, followed by hearts, diamonds, and clubs.

3. What is the rule of teen Patti?

The rules of teen Patti rules can be complicated, but we have simplified them for you in this blog.

You have to start with a minimum bet when the dealer is dealt with the card. Later as the round proceeds, you can bet twice or four times the current stake on the table.